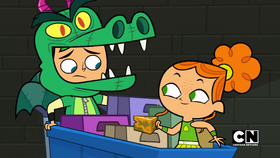 Duncan finally manages to break out only to realize that a thunderstorm has started, so along with Izzy, he embarks on an adventure back to the daycare.

Owen is spinning pizzas on top of sticks while performing tricks until he eats them.

.. Princess Ephemera to the kids.

Princess Ephemera tells the kids that she came from Sparkle-landia.

Duncan tries to think of a way he can get out of the daycare.

Harold wonders if Sparkle-landia has dragons in it.

Princess Ephemera tells the kids that Sparkle-landia does have dragons in it.

The kids get scared by the dragon.

Izzy wants to go to Sparkle-landia.

Gwen wonders if they can slip Princess Ephemera a poisoned apple.

Duncan comes up with a plan as to how he can get out of the daycare.

The kids play with the costumes Princess Ephemera gave them.

Princess Ephemera tells the kids that she has to go back to Sparkle-landia.

Princess Ephemera notices that her suitcase is very heavy.

Duncan notices a foot right next to him in Princess Ephemera's suitcase.

Duncan gets out of the suitcase.

Duncan falls into a dragon costume.

Duncan gets scared by the animals that are around him.

Duncan notices that something will come out of the suitcase.

Izzy comes out of the suitcase.

Duncan asks Izzy what is she doing in here.

Izzy thinks Duncan is a dragon and attacks him.

Izzy starts eating from the garbage..

.. which almost makes Duncan throw up.

Duncan gets scared after he hears the sound of a thunder.

Duncan tells the rats that he's afraid of thunderstorms and Izzy.

Duncan decides to go back to the daycare.

Duncan tries to calm himself down.

Duncan remembers the time when he..

.. got struck by lightning as a baby.

Duncan hides inside his hiding place..

.. only to get struck by lightning again.

Duncan tells the bus driver to open the door.

The bus driver gets scared by Duncan.

Duncan scares an old lady and steals her cart.

Duncan and Izzy use the old lady's cart to get back into the daycare.

Duncan and Izzy bump into an alligator.

The alligator falls in love with Duncan.

The alligator starts running after Duncan and Izzy.

"I guess this is why you don't flush gum down the toilet."
- Duncan

Duncan and Izzy get out of the sewer.

Duncan and Izzy find the daycare.

Beth wishes Princess Ephemera would be there to tell them another story.

Gwen doubts she'll be lucky enough to see Harold getting eaten by a dragon.

Chef tells the kids that he will get the lights back on again.

Chef runs as much as he can so that there can be light..

.. which only works in his office.

Duncan and Izzy are unable to get back into the daycare.

"I've spent my whole life trying to get out of this place. How can it be this hard to get back in?!"
- Duncan

The kids mistake Duncan with a real dragon.

The kids hide from who they believe is a real dragon.

Courtney thinks the dragon will go away when he's full.

Cody wants to give his sandwich to the dragon.

Courtney asks Cody if he's sure about what he's doing.

Duncan notices that the door is now open.

Cody sees who he believes is a dragon..

Cody finds out that the dragon is actually Duncan.

The wind helps Duncan get into the air vents.

Duncan gets into the air vents.

Courtney tells the kids that there's nothing to worry about.

The kids get scared..

.. until the lights get back on and see that the dragon is actually Duncan.

Gwen is dissapointed that there won't be a funeral.

Cody gets struck by lightning.

Retrieved from "https://totaldrama.fandom.com/wiki/Soother_or_Later?oldid=1589554"
Community content is available under CC-BY-SA unless otherwise noted.