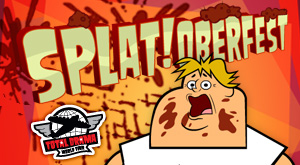 Splat! Oberfest is a Total Drama World Tour game, produced by Cartoon Network. The game was released on August 30, 2010.

In the game, the player can only control one character. Meat grinders are stuck at the maximum level at a sausage producing factory. Owen (in the sausage shape he was after eating all the meat in Slap Slap Revolution) must collect all of the overflowing meat so that a "meatalanche," as the game calls it, does not occur. Also, shooting out of the meat grinding machine are disgusting materials Owen must avoid eating or else he will become sick such as dead spiders, flies, cockroaches, bandages, and mice. If Owen happens to eat one of these disgusting materials, he will temporarily stand still, causing the player to lose time that is needed to eat the meat. Along with the disgusting material and the raw meat coming out of the machine are bonus sausages that multiply the player's score by two or ten. These sausages are golden with the number of the multiplier on them.

The player has two options of play in this game. They can either play the mode where you use a mouse, or a mode involving a webcam and printer to play. When using the mouse, Owen is controlled by the player moving the mouse in any direction to collect the falling sausage to win. If the player chooses webcam mode, the player prints out a picture of a sausage which the game calls "the marker." After this action is completed, the webcam starts to videotape the player. Owen chases the marker, which the player holds up and moves around for him to eat the meat. The marker is also used the same way as the mouse would be used. 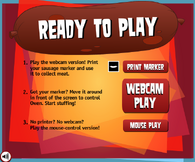 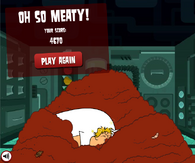 Owen laid out in the sausage after he loses the game. 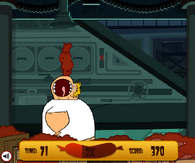 Owen in the middle of a level. 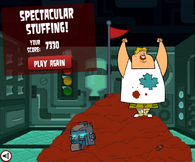 Owen after the player wins the game.

Retrieved from "https://totaldrama.fandom.com/wiki/Splat!_Oberfest?oldid=1589977"
Community content is available under CC-BY-SA unless otherwise noted.