The Rockers with Rock

Carter Hayden
Spud was a Total Drama Presents: The Ridonculous Race contestant as a member of The Rockers with Rock.

Spud is best friends with Rock. The two are in a garage band called "Devil Frog" together and still haven't moved out of their parents' basements. Spud is a good-natured person and a kind friend, but is described to have all the brain power and drive of a very dull sloth. Spud is incredibly dim-witted and has a delayed reaction time in response to fear, pain, panic, and sometimes even excitement, as shown on many occasions. As a result, he is often a source of irritation to his friend Rock and a hindrance to the competition at times. In addition, he is trusting to a fault and overshares his weaknesses, which others manage to exploit. However, Spud shows that he is at least partially able to hold his own, as long as he gets the direction he needs. Although usually forgetful, he can remember useful information if he sings a corresponding song from his memory.

Spud joins the Ridonculous Race with his bandmate, Rock to help him win the million dollars though it took some convincing from Rock to get Spud to sign up. Spud is known for two things: his extremely slow reaction time and his lack of motivation. Initially, Rock allows Spud to sit back, but after a while, he begins to become stricter and forces Spud to participate. Spud's lack of effort in challenges causes to the Rockers to place very low for the several episodes.

In New Beijinging, Spud becomes more involved as Rock motivates Spud to take the race more seriously by baiting Spud with his favorite treat. However this backfires as Spud suddenly consumes all of the treats at once without Rock noticing, ending up having a sugar rush. The sugar rush allows Spud to pull the rickshaw at high speeds towards the Great Wall of China. However Spud loses all his energy at the last minute, and collapses a few feet the Chill Zone and are the last team to arrive. Fortunately, Don informs them it's a non-elimination round.

In I Love Ridonc & Roll, Spud becomes more active than before, though he keeps making poor choices, such as inviting the Goths, Haters, and Cadets to share their taxi, and reveals his quirk that he cannot resist a dare. MacArthur exploits his weakness when she dares him to kiss a baby seal. Spud accepts her challenge, but ends up getting bitten. His injuries cause the Rockers to be the last team to arrive at the concert and to make things worse, it is Spud's turn to compete the Botch or Watch. Just as it seems that they are going to lose again due to Spud's injuries, Spud plays the air guitar magnificently and wins the challenge, impressing both Rock and the audience, and putting the Rockers in first place for the first time. Don comments on Spud's performance, saying that there is no soul in Finland that is not filled with joy.

In My Way or Zimbabwe, the Rockers fall behind once again, though Rock compliments Spud for having a faster reaction time than usual. In Down and Outback, Spud is forced to compete alone as Rock broke both his leg early on. After watching Devin's behavior, Spud informs Carrie that Devin is suffering from "the Seven Stages of Heartbreak." Later on, Spud finds a snake that has eaten the exact number of rabbits they need, which he retrieves by making the snake regurgitate. While flying to New Zealand, their air glider crashes into a mountain and Rock gets stuck. Spud is forced to carry his partner, but as he does so he yells loudly and triggers an avalanche, which carries them and the Stepbrothers all the way to the Chill Zone. After reviewing the video, Don announces that the Rockers arrive before the Stepbrothers, only to declare that they too are eliminated, as it is a double elimination round. The Rockers take their loss well, even though Spud is still oblivious of their elimination. On their way home, the Stepbrothers invite them over to play video games.

In A Million Ways to Lose a Million Dollars, the Rockers watch the final two teams competing alongside with the other eliminated teams. When Rock is commenting on which team will win the million dollars, Spud misinterprets this and believes that they are in the finale. After the winner is declared, the Rockers join the others in the final group shot.

Spud looking at something.

Spud covered in a blanket. 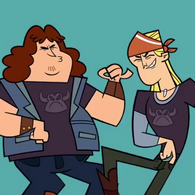 Spud's rotation with a blanket.

Rock and Spud on the Skywalk.

The Rockers on the plane.

Rock and Spud waiting at the airport.

Spud appears buried in the sand.

The Rockers celebrate that they get their next tip.

Spud being forced to eat by Rock.

Spud finally feels the pain in his hand.

Spud tries to cheer Rock up.

Spud celebrates being in the bottom four.

The Rockers arrive to the Chill Zone in Hawaii.

Spud claps after Twins finish the challenge in first.

Spud returns a serve with his stomach.

At the beginning of his try during the air guitar challenge, Spud stands motionless...

...but soon gets with the beat.

The Rockers in Zimbabwe.

Spud's selfie with a rhino.

Spud sings to Carrie the "Seven Stages of Heartbreak".

...that contains all the rabbits they need.

The Rockers' jet crashes into a mountain.

Rockers and Stepbrothers wait for the instant replay of who lost.

Rock and Spud are eliminated in a double-elimination round.

Retrieved from "https://totaldrama.fandom.com/wiki/Spud?oldid=1588229"
Community content is available under CC-BY-SA unless otherwise noted.