Ashley Peters
Staci was a camper on Total Drama: Revenge of the Island, as a member of the Toxic Rats.

Little is known about Staci due to her limited time on the show. She is infamous for constantly exaggerating about her family, thus making it exceedingly difficult to distinguish fact from fiction when it comes to her background. Staci appears to have good intentions but is talkative to an annoying extent. Additionally, her audition shows that she wants to be accepted by her peers and impress people with her lies. This implies that Staci may be socially awkward and may not have many friends.

From the moment Staci is introduced in Bigger! Badder! Brutal-er!, she continuously brags about all the "inventions" created by her ancestors, even in dire situations, such as when she is drowning in the lake. Staci is placed on the Toxic Rats and does little to help her team, only spewing out random claims of her ancestors inventing whatever objects the current situation involves. Her constant ramblings and ineptitude get on the nerves of her teammates very quickly. This leads to her being the first contestant of the season voted off and receiving a Marshmallow of Toxic Loserdom. Upon touching the radioactive marshmallow, Staci instantly loses all of her hair. She accepts her loss and becomes the first person to take the Hurl of Shame. As she is about to start her usual rambling again, Chris immediately activates the catapult, sending Staci away from the island screaming through the ride.

Staci returns to watch the climactic battle between Cameron and Lightning in Brain vs. Brawn: The Ultimate Showdown as a member of the peanut gallery among the rest of the eliminated contestants. When the mutants run amok in the Chrisiseum, Staci is gobbled up by Larry just as she was about to talk about another one of her relatives. She eventually spits out after Cameron targets Larry's weak point. After the winner is declared, Staci leaves the island with her fellow contestants and laughs at Chris when he blows up the dock under him and is arrested by the RCMP.

Staci's original design had light blonde hair with a small blue band in it, which was changed to a modified version of Zoey's original hair, being shorter with a smaller bow. Her jacket was originally a coral pink color, but it is now a hot pink color. Staci's jacket also had two purple pockets on it, and is rolled up at the end of the sleeves. Her pants were originally dark blue, but have since changed to light purple. The lines on her knees were removed. Staci's eyes are now dark blue, her nose is smaller, and her figure also became much less round, now slightly resembling Sadie's.

Staci starts by claiming that she will win Total Drama: Revenge of the Island because she came from a long line of people who think outside of the box. She then points, with a stick, to a board that has pictures and text about her relatives. She states the many relatives' inventions, such as forks, invented by her great-grandfather Dave; plates, invented by her great-great-aunt Lois, and floors, invented by her great, great, great uncle George. She also explains how people managed to do things before these inventions were created. In the end, Staci says that she is very excited about telling everyone about her family and that she knows they will be impressed. 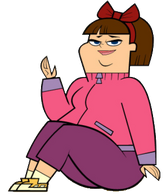 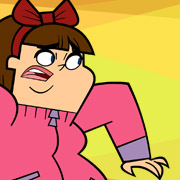 Staci talks to Anne Maria about her ancestors...

...and an annoyed Anne Maria attacks her with her spray tan.

Staci during the opening sequence.

Staci starts to drown, still talking about her family...

...but thanks to Zoey and Mike, she is saved.

Staci lying about her family after reaching the shore.

Staci speaks to her team.

...and loses all of her hair as a result.

Staci takes the Hurl of Shame.

Staci says another lie before Chris catapults her.

Staci is caught in Larry's mouth during the finale.

Retrieved from "https://totaldrama.fandom.com/wiki/Staci?oldid=1603246"
Community content is available under CC-BY-SA unless otherwise noted.