Rochelle Wilson
Sugar was a contestant and one of two main antagonists of Total Drama: Pahkitew Island, as a member of the Wâneyihtam Maskwak.

Sugar is determined to be crowned queen of the pageant known as Total Drama. She is used to the life of competition and beauty and has exhibited impressive game strategies despite her lack of brainpower. She's fearless, strong, and is always willing to try new and unusual things, as shown by her claim that she's thrown a tractor before, and her also eating a tarantula with no hesitation. When Sugar doesn't get her way, she can be quite abrasive and harsh, which is shown through her conflict with Ella, in which she would constantly laugh at her torture and misfortune.

Due to the pageant life, Sugar seems to be suspicious of others, as she can not recognize true kindness and is willing to tell lies in order to manipulate others. This makes it difficult for her to make friends, which she does not seem to have an issue with. She has trouble distinguishing fact from fiction, as she believes Leonard to be a real wizard and Max to be a real evil genius. Despite this, Sugar is not all bad; as Sky says, Sugar is good at staying positive, even in the darkest of situations.

From her debut appearance, Sugar immediately comes off as being very aggressive, giving Topher a death threat due her "pageant shoes" were at risk of being "scuffed". She is also shown to be very passionate about her pageant background, taking great pride in her looks and appearance. Sugar also begins to admire her new teammate Leonard, who she believes is a real wizard. She is shown believing anything he says, and supports any plan he comes up with, regardless of how ridiculous it sounds. Leonard's idea of building a "wizard tower" end up costing their team the win, but Sugar remains loyal to him and is one of the few members who doesn't vote for him. Her infatuation towards Leonard continues in I Love You, Grease Pig!, from believing his ridiculous stories to forcing Dave to put him in the final leg of the race in place of Sky. She also becomes increasingly annoyed at Ella, and finds her singing to be irritating. Sugar performs well in the challenge, due to the immense affection she displays towards the grease pig. However she gives the team trouble when she refuses to pass the pig to Ella, but she grows to hate Ella even more when her singing attracts the pig over. The team ends up losing, once again thanks to Leonard's failed attempts to perform magic. This time Leonard gets eliminated, and as he gets fired from the Cannon of Shame, Sugar farewells him and tells her wizard that she loves him.

Sugar's dislike towards Ella escalates further in Twinning Isn't Everything, and her feelings begin to turn physical when she shoves a pear in Ella's mouth to stop her from singing. Ella remains oblivious to Sugar's emotions and continues trying to befriend her, which only adds to Sugar's hatred. Nonetheless, Ella persists in her attempts to win Sugar over in the next episode. All her kind gestures, from offering Sugar a seat, to reassuring Sugar she's pretty, only further aggravates an increasingly violent Sugar. During the "Truth or Scare" challenge, Sugar is tasked with patting a tarantula but mistakenly eats it. Ella finally realizes Sugar is annoyed by her singing, in A Blast from the Past, and tries to reach out to her using a poem, but to no avail. During the challenge, Sugar is shown enjoying watching Ella suffer. She laughs when Ella gets electrocuted by Max, and when Scuba Bear emerges and is about to attack her. In the final round, Sugar is faced off with Samey, and is able to secure the win for her team after Samey gets preoccupied with Amy's surprise return. However, Chris had placed a ban on Ella's singing, and threatens to disqualify her should she sing. With this knowledge, Sugar tries hard to get Ella to sing in so that she will be kicked out.

Sugar begins to show the first signs of antagonism in Mo Monkey Mo Problems where she messes with Sky and tries to convince her that Dave's feelings for her aren't genuine. During the challenge, Sugar proves to be a huge hindrance by eating a banana that they needed to lure the monkey, as well as getting Ella to sing. In the end, she does help the team out by getting the bear to regurgitate the monkey, and reaching down the monkey's throat to retrieve the coin it ate. However Jasmine arrives with her team's coin. Jasmine nearly reaches the vending machine, but Sugar throws her coin from several yards away and gets it into the coin slot, winning it for her team. Despite being victorious, Ella ends up being eliminated, due to Chris finding out she sang via an anonymous note. It's revealed that Sugar was the one who wrote the note, and at long last she had disposed of her rival.

With Ella gone, Sugar turns her attention to breaking apart Dave and Sky. Throughout This Is The Pits!, she repeatedly attempts to keep them apart. At first, Sugar tries to form an alliance with Shawn against the couple, but is unsuccessful. She then repeatedly interrupts Dave and Sky each time they get intimate, by grossing them out with her habits. Despite Sugar's persistence, it is actually Chris who succeeds in breaking them up, by performing a team switch between Sky and Max. Sugar takes a liking to her new teammate, believing he's a real evil genius. In Three Zones and A Baby, she spends most of her time laughing at Max's misfortune. At first, Max remains indifferent, but he later becomes annoyed by Sugar. During the challenge, Sugar continues to be amused by Max, when he acts very sweetly to his baby. Despite the team running into numerous misfortunes, such as Sugar leaving her baby behind, as well as Shawn and Sugar being forced to carry a paralyzed Dave, the team still ends up winning.

When the teams merge in Hurl and Go Seek, Chris organizes a celebratory meal consisting only of disgusting, expired, "Juggy Chunks". Sugar is the only one who enjoys them, and easily wins the first challenge of consuming the drink the fastest. As a result, Sugar wins immunity, as well as being the tagger in a game of hide-and-seek. Sugar finds Dave, after he gets his heartbroken by Sky, and exploits his feelings to capture Sky. Soon after the sickening effects of the expired Juggy Chunks take hold, and the contestants begin to take on a zombie complexion. By this stage, only Shawn and Jasmine haven't been captured, and Sugar's "zombie hoard" pursues them up a tree. In the end, Shawn sacrifices himself to save Jasmine and knocks Sugar and the other zombies off the tree. The island goes haywire in Scarlett Fever, after the events in the previous episode. Chris is forced to admit the island is artificial, and when the island's self-destruct activates, he sends to contestants into the island to shut it down. Sky suggests all of the contestants team up, however, she is dismayed to find out she is left with Sugar. Despite her initial disappointment, Sky and Sugar manage to cooperate and overcome several obstacles which include getting stuck in a hole together, escaping a fire-breathing robotic-kitten, and a chamber of crushing machinery. Later on, they're tricked by Scarlett into entering a room full of Chris Promo Bots, and manage to escape with their lives.

Sugar helps to take Scarlett down by tackling her, and tying her up using her own hair. After Scarlett is eliminated, Sugar forms an alliance with Sky. Sky is forced to pull Sugar around throughout the mountain climbing challenge. After overcoming many obstacles together, the girls end up trapped in a cave full of robot bears, to which Sugar saves Sky by destroying all the bears with her flatulence. Shortly after the girls are in a race against Jasmine to the finish line, as Shawn had already won. Sky continues trying to push Sugar along, but Sugar decides to betray Sky at that moment and sends her plummeting off the mountain. Sky is saved a flying robot crocodile, which she rides to the finish line and gets second place. Sugar then turns her attention to Jasmine and leans on a tree, which falls on top of Jasmine. This gives Sugar enough time to secure third place, and Jasmine ends up being eliminated.

Having broken off her alliance with Sky, Sugar fully antagonizes her in Pahk'd With Talent. Throughout the whole episode, Sugar tries to throw Sky off her game, including pretending to club her to give her nightmares, pushing Sky into a thorn bush, and trash talking. Sugar does poorly at Sky's hurdle challenge, and collects the hurdles rather than jumping over them, and ends up coming last. For Shawn's tree-hopping challenge, at first, she performs badly and climbs to the top of a tree rather than jumping. However Sugar's weight causes the tree to bend, which then flings her all the way to the finish line, and comes first. For the final talent challenge, she performs a music genre invented by her which combines country and rap, which she calls "Craptry". However, her performance fails to impress the judges, and her falsetto causes damage all around the island, including blowing up Scuba Bear's head. Chris ends up eliminating her straight on the spot, and she gets shot out of the cannon while calling out "I'm coming, wizard".

In Lies, Cries and One Big Prize, a picture of Sugar is shown on the television screen when Sky and Shawn must choose their helpers for the challenge as an example, which they both show disgust towards.

View this page for her Total DramaRama counterpart.

Sugar, on her farm, comments on how she's been on TV before. The camera then cuts to Sugar's appearance in a commercial for Darwin's Food Safari, where she is singing the restaurant's theme song and is dressed up as a cow. She momentarily mixes up a line, then falls forward onto her face, commenting on how she "nailed it." She then releases a fart afterwards. 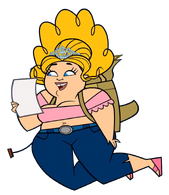 Sugar signaling to the right.

Sugar with a baby. 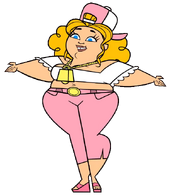 Sugar as Sugar Silo in Pahk'd With Talent. 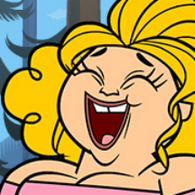 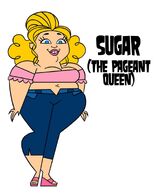 Sugar is annoyed by Ella's singing in the opening theme.

"Stop your fidgeting! You scuff my pageant shows and I'll toss you out the window!"
- Sugar

Sugar doesn't have an actual parachute.

Sugar cleans her face with a snake.

Sugar shoves Ella to the ground.

Sugar tries to get a coin out.

Sugar after eating a glow slug in This Is The Pits!

Sugar laughs at her new teammate in Three Zones and A Baby.

Sugar tries to cheer Dave up.

"Back off, furball! This ain't dinner for two."
- Sugar

Sky is forced to team up with Sugar in Scarlett Fever.

Sky and Sugar have trouble getting down the hole.

Sky and Sugar form an alliance in Sky Fall.

Sky and Sugar cling onto the monitor.

Sugar falls on her nose.

A flashback showing Sugar getting hit with a rake.

Sugar reveals that her most sensitive part is her nose.

... before she's betrayed by Sugar.

Sugar knocking over a tree.

Sugar drops a tree on top of Jasmine.

Sugar's silhouette as she's about to club Sky.

Sugar claims that she never loses when it counts.

Sugar about to perform her craptry: "Sugar Silo".

Sugar is the final contestant of the season to take the Cannon of Shame in Pahk'd With Talent.

Sugar's cameo in Lies, Cries and One Big Prize.