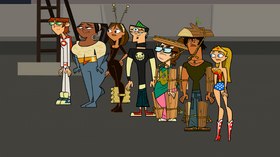 Leshawna
It is a super time on set, as the contestants participate in superhero-based challenges. Someone forms a fierce rivalry with another castmate, while two others maintain their old rivalry. A new alliance is formed, replacing an old one, ending it all with one cast member's elimination and someone else's heartbreak.

The episode begins with flashbacks revealing that Courtney and Lindsay actually took the cheese factory tour, though Courtney didn't seem too enthusiastic about the trip when she says Lindsay smells like feet. Back on the set, Harold gets upset when Duncan kicks his rear while a burrito is in his pocket, causing the burrito to get smashed in Harold's pants. Justin intervenes in the fight and uses the temporary peace to form a guys' alliance with Harold and Duncan, based on the premise that the girls outnumber the guys four to three and with Courtney back on the show, the girls will eventually figure it out and pick them off one by one. The scene then cuts to Leshawna and Beth, who are enjoying some cheese that Lindsay brought back from the factory. However, Courtney refuses to eat, as she is simply angry at Lindsay for enjoying the cheese factory tour so much and because the cheese smelled so bad. The two groups go to bed as they talk about what to do about the opposing group. The guys' alliance agrees that they will need a plan to remain in the competition so that one of them can win the million dollars.

The next day, the castmates arrive at the center of the film lot in their pajamas. They see Chef being held in the air by a bungee cord, wearing a pink dress and screaming for help. Chris then jumps from a building, dressed in a costume that resembles Batman, and manages to grab Chef Hatchet. The two then fall as the cords they were attached to break. Chris lands by Courtney's side and she asks when he'll tell her about the challenge, but Chris is too angry about the cord snapping to even care.

Shortly afterward, Chris announces that he feels like telling everyone what the challenge is, so he does. Chris tells the final seven that the challenges will be based on superhero movies. The contestants begin to complain about just waking up, not brushing their teeth or not having breakfast. Chris reminds them that, in movies, evil never sleeps and that heroes don't do the same thing as "mere mortals," but Harold disagrees and explains that many of them are mere mortals and ordinary humans. Chris tells everyone to shut it so he can continue explaining the challenges: (1) Superheroes have superpowers; (2) superheroes save people; (3) superheroes wear tights. Everyone is upset to learn that they will have to be wearing spandex outfits, along with other extra "junk," except for Lindsay. Chris asks them to get dressed and meet him back.

On their way, Harold thanks Duncan for the burrito, which he calls breakfast.

Courtney taunts Lindsay by telling her she could use her stench as a superpower, calling her Gorgonzola Girl, but Leshawna interrupts her and calls Courtney "Aged-Cheddar Chick."

All of the contestants must dress as superheroes, tights and all, for the challenge. They each have to make their own superhero costume and will be judged on originality. He also tells them that Chef under the alias of "Pythonicus," along with his sidekick cat "Dander Boy," will be playing the supervillain and will attempt to sabotage their work. Chris asks them if they have any questions but ignores them, telling them to begin the challenge. As they all run, Courtney and Lindsay fight over the same color of fabric roll, but Courtney pushes Lindsay off, obtaining it herself.

All the castmates work on their outfits except Duncan, who doesn't seem to care, while Pythonicus and Dander Boy manage to sabotage the contestants: Dander Boy scratches Leshawna's costume as she tried to measure it; Pythonicus takes away Beth's piece of wood and shreds it and puts a piece of a different-colored fabric on Lindsay while she sews her costume; Harold's sticker is changed; and Courtney is electrocuted.

The castmates all come out with their finished costumes and made-up powers: Beth comes out as "Lumber Woman," whose superpower is being able to talk to plants, but gets a 3/10. Justin's outfit is practically the exact same thing, except his name: "Timber Man," and gets a 2/10. Chris likes Harold's persona, "Captain Alberta," due to "keeping it Canadian" and having such a good superpower (powerful farting); which earns him a score of 7/10. Chris is dismayed when Duncan's superhero is revealed: "The All-Seeing Eye." However, Duncan refuses to wear any spandex and Chris gives him a 2/10 for poor superpowers. He has hope when Courtney's outfit as the "Human Cricket" gets an 8/10, after she reveals her superpower of making an annoying scraping sound using her costume. Leshawna receives a 7/10 as "Super Aqua Chick" after she sprays Chris with water. Lindsay is the last to come out and says her superhero is "Wonder Woman," but is reminded by Courtney that Wonder Woman already exists. When asked about her superpower, Lindsay says that she wonders a lot. Chris, however, says he loved Wonder Woman when he was young and proclaims Lindsay the winner of the challenge. Courtney argues that Lindsay's outfit isn't original, but Chris reminds her that he makes the rules. After Lindsay complains that Courtney stepped on her "invisible jet," Courtney gets two points taken off her final score, even if the winner had already been decided. Lindsay then asks if they want a ride on her invisible jet, to which everyone, except Courtney, raises their hands cheerfully. Chris then winks to the camera saying "I love this show."

The second challenge will test the castmates' powers.

Every contestant has to jump from a trampoline, over a building, then land on a mattress to save a "girl," which is actually a potato sack wearing a dress.

This confessional leads to a flashback of exactly the moment taking place. Finally, the castmates must go through a "meteor shower," which is really Chef throwing bowling balls over an electric wire. For a demonstration, Chef throws a bowling ball at a water tower, which goes straight through the tower, sending water pouring out of it. The castmate who completes the challenge in the least amount of time wins. For winning the first challenge, Lindsay gets ten seconds cut off her overall time.

Lindsay is up first for the obstacle course and, despite her bonus, she does a terrible job. She fails her jump, misses the potato sack, and is hit by a bowling ball when she crosses the telephone wires.

Harold surprises everyone by putting on a great display, and even manages to use his "superpowers," which are farting to speed up his time.

Harold completes the challenge with an impressive thirty-six seconds. Harold taunts Duncan by rubbing his success on him, and Duncan grabs him by the cape and threatens him by reminding him that Duncan's "real superpower" is the ability to "cream dorks like [Harold]."

All the other five go next, but Leshawna hits a prop, failing her jump. Justin is hit by a bowling ball, is electrocuted, and fails as well. Duncan, Harold, and Courtney are the only ones to finish the course. Even though Harold makes it in thirty-six seconds; Courtney wins the challenge, and invincibility, with thirty seconds.

The guys try to think of whom to vote off that night, and when Justin suggests they should vote off Courtney since she is the biggest threat, a worried Duncan reminds him that she won immunity. Duncan then tells everyone to vote off Leshawna, to Harold's anguish, and he refuses to vote with the alliance. Duncan convinces Courtney to vote off Leshawna and unsuccessfully attempts to blackmail Harold into doing so too, her knowing the girls will want her off if she loses the next invincibility challenge. Leshawna, Lindsay, and Beth are deliberating in the washrooms, and they choose Duncan, not only because he's a strong castmate, but because it would hurt Courtney as well. Leshawna points out that only three of them wouldn't be enough, and Beth attempts to convince Harold to vote off Duncan. Courtney then appears and tells Harold to vote off Leshawna.

She also lies to him by saying the girls are trying to vote him off.

The Awards Ceremony begins with Courtney, Justin, Beth, Harold, and Lindsay receiving the Gilded Chris awards in that order. Leshawna and Duncan are the last two left, and the final award goes to Duncan. Leshawna is voted off, leaving Lindsay and Beth shocked. Leshawna thought that they had betrayed her into voting her off, but Harold later jumps onto Leshawna, telling her that he is sorry, saying that he joined Duncan, Courtney, and Justin into voting her off. He wasn't sure if he could trust her, but he realizes he made a mistake. Leshawna tells him not to worry because she made a mistake earlier, and then forgives him. As Leshawna heads on over to the Lame-o-sine, Harold, Lindsay, and Beth waved goodbye to her. Leshawna tells Harold to keep continuing on in the game, and tells him to stand up for himself. After she leaves, Duncan tells Harold that he has something in his pocket, only to kick him in the butt when Duncan once again put the burrito in Harold's back pocket. When Harold says that things couldn't get things worse for him, Chris knocks him to the ground in order to close the show. After Chris signs off, Harold tells him that he broke his glasses.

Duncan makes it a habit to crush Harold's burritos throughout the episode.

Courtney and Lindsay argue about who stinks more...

...only for Leshawna and Beth to tell them that they both smell.

The guys form an alliance, since they have a disadvantage in numbers.

...and Leshawna insults her back as a response.

Courtney shoves Lindsay out of the way as they fight for costume materials.

...electrocutes Courtney while she is using the sewing machine...

...but is unable to find any way to hinder Duncan.

The guys want to join Lindsay at her invisible jet.

"You may have forgotten that my real superpower is being able to cream dorks like you!"

While some perform well in the challenge...

The guys are lost at first on who to vote out.

"You have circumstantial evidence at best."

Duncan tells Courtney to swing Harold's vote to get rid of Leshawna.

Beth attempts to get Harold to vote out his enemy Duncan.

Chris shoves Harold to the ground after the Lame-o-sine drives off.
Community content is available under CC-BY-SA unless otherwise noted.