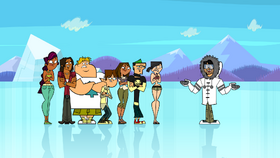 Team Chris Is Really Really Really Really Hot
The two teams land in Sweden to compete in a "Viking" capture the flag game. Someone still tries to flirt with an opponent while another contestant misses a fallen teammate. Meanwhile, someone becomes aware of someone else's true nature, thanks to a fallen teammate, and warns another, much to his surprise. Someone reveals his true feelings for another. In the end, the host reveals that there will be no elimination again, sparing someone and leaving others disappointed.

The episode opens with Sierra in economy class claiming that she is excited for the beautiful day (as she describes it) to a mouse she picked up. In the confessional, she admits that she is happy because Gwen is finally eliminated. She now hopes that Cody will pay more attention to her and get over his massive crush over Gwen. However, Cody is still upset about Gwen being gone and sighs about it. Alejandro is seen flirting with Courtney (continuing his plan from the previous episode) by commenting that she is the only pretty contestant in the competition, much to Heather's annoyance. Owen and Duncan are seen eating chocolate chip cookies, clearly enjoying the first class section. Alejandro comes in and grabs two cookies, then heads out.

Owen is curious if Duncan feels awkward about Alejandro and Courtney being together, but Duncan reassures him that he doesn't care. Owen then begins talking to Duncan about how Noah had told him that Alejandro was attracted to Heather. This interests Duncan, who asks for more information. Owen then tells Duncan about how Noah had described Alejandro in I See London.... Immediately understanding what Noah had meant, Duncan suggests that in order to respect Noah's parting words, he and Owen should not trust Alejandro and consider him an enemy. Duncan believes that Owen needs to ally with him so they can keep each other safe. Alejandro is seen back in the economy section giving Courtney a cookie. She and Alejandro then feed each other the cookies. Alejandro points out in the confessional that now that she and Duncan are broken up, Courtney had become easy to manipulate. Heather, clearly jealous, tries to get Alejandro's attention by claiming that a piece of gum is stuck on her butt, but Sierra ruins it by pointing out that there is no gum.

The Total Drama Jumbo Jet lands on an icy lake in the frozen land of Sweden and slides a long distance across it. While the cast is freezing from the cold, Heather asks if the jackets Chris ordered in the Yukon are available yet, but he replies that they aren't. Courtney demands Duncan to apologize about kissing Gwen, but Duncan refuses. Alejandro then cuddles Courtney to keep her warm, convincing her that it would make Duncan jealous. Heather notices their cuddling and tries to cuddle with Duncan in return, but he refuses to and pushes her away from him. Chris then greets them with a Swedish accent. The contestants ask him where their jackets are, but Chris informs them that they will be arriving in six-to-eight weeks. He then announces the challenge: they are supposed to build some kind of contraption out of a pile of parts and they have to figure out what it is they are supposed to be building. The winner will win an advantage in the next challenge. Heather and Courtney almost immediately begin arguing and Owen inadvertently suggests they build a boat to which Duncan and Alejandro agree to, but they try to keep it a secret.

Cody suddenly has an idea relating to the challenge and begins to work with Team Amazon's pile of stuff and the others let him work. When he is done, it is revealed that he built a wooden replica of Gwen's head. Heather angrily tries to attack him with a mallet, chasing him around 'Gwen's face' multiple times. Sierra interrupts with a massive metal rod, exclaiming at Heather not to hurt her Cody, and they start fighting each other. In the ensuing battle, Courtney is knocked unconscious by a wide swing. Chris then signals them to sing. Alejandro warns Owen not to tell the Amazons what they are building a boat, causing Owen to scream just that.

After they sing We Built Gwen's Face, Owen's stomach begins to rumble and Duncan asks him if he is going to pass gas. Owen confirms this and then runs, sits down on the ice and lets out a huge fart, causing the ice to break and Team Chris Is Really Really Really Really Hot to set sail. Sierra has an idea and tells the Amazons to cut the top off of their wooden Gwen head and hop in it before the water gets to them. Courtney and Heather happily agree to this, due to their problems with Gwen. Duncan and Alejandro flatter Owen to try and gain his trust and they make him captain of their ship. For being the first to sail to a set location in the challenge, Chris later gives Team Chris Is Really Really Really Really Hot a bag of rocks, which makes the team ponder about what they would be used for. The next part of the challenge is to capture a flag first or sink the other team's boat with cannons. The rocks are revealed to be flint rocks to fire their cannon. Instead of going for the flag, Owen orders them to attack Team Amazon and to talk like "Vikings", while accidentally using a pirate accent instead. Team Amazon nominates Cody as the captain and are given no tools to light their cannon.

Team Amazon fires first and misses, which causes a back and forth firing battle. Owen uses his team's last piece of ammo and fires it out of the cannon, but it ends up hitting the mast of their ship and breaking it, leaving them stuck where they are. The Amazons pass them, taunting the other team by saying that they will win. When it looks like the Amazons are going to win, Owen orders his team to shoot him out of the cannon. Duncan asks Owen if he's sure about what he's doing, but Owen assures him he is. Duncan lights the cannon with the flint and fires Owen straight at the Amazons' boat. Just as the Amazons are about to take the flag, Owen crashes into the enemy ship, completely destroying it and winning the challenge for his team.

Heather, back in the plane, confronts Alejandro and wants to know why he is picking off her teammates and ignoring her. He then explains that he is trying to get rid of Courtney and for his plan to work, he has to make Courtney think he likes her. Alejandro then comments in the confessional how jealous Heather is, but he adds that he only cares because it's strategic. Owen is then shown talking to Duncan, feeling conflicted about if he should trust Alejandro, while Duncan carves Gwen's face into the side of his chair. Duncan advises him to "do what Noah would do". Owen seems to agree. At the elimination ceremony, Sierra, Cody, and Heather all plan to vote off Courtney, but Chris then reveals the episode to be a reward challenge, leaving Heather and Sierra mad. Chris then signs off the episode.

Team Chris Is Really Really Really Really Hot is seen receiving their reward, a Swedish massage from a therapist. However, the therapist is revealed to be a large Viking. Alejandro begins to scream in pain as the Viking massages him while Duncan and Owen watch in horror.

Sierra tells a rat that with Gwen gone, this is the best day ever.

Heather is jealous of Courtney for flirting with Alejandro.

Alejandro showing what he plans to do with Courtney's trust.

Duncan and Owen discuss their future plans in first class.

When Duncan mentions Noah, Owen starts to get upset.

Duncan attempts to ally with Owen and seal an alliance.

- Heather, trying to get Alejandro's attention

Courtney yells at Cody for his constant sighing.

Heather attempts to make Alejandro jealous by flirting with Duncan...

...but the two ended up fighting.

Chris announces that the jackets ordered in the Yukon are in the mail...

...arriving in six to eight weeks.

The teams learn their first challenge: Build something out of scratch.

Alejandro tells his teammates that he knows what they have to build.

Heather and Courtney argue about what they have to build.

Duncan tries to make sure Owen no longer trusts Alejandro.

...which the rest of his team are very unhappy about...

...but Cody continues to express his sadness about Gwen's elimination in the confessional.

Sierra, right before Heather tries to attack her.

Owen accidentally reveals that they are building a boat...

...much to the Amazons' surprise.

Alejandro rips his shirt off...

...and Heather and Courtney gush over him, while Sierra remains unimpressed.

Owen can no longer hold his stomach...

... and his fart causes the ice to break.

Both of Owen's teammates congratulate him.

Cody barfs when Sierra talks him about "Codyland."

Chris gives Chef's Swedish meatballs to be used as cannonballs.

The second challenge: First team to retrieve the flag or destroy the other boat wins.

Sierra jumps in front of a Swedish meatball to save Cody...

...getting hit in the stomach for him.

Cody thanks her for sacrificing herself.

Sierra cringes in pain after getting hit by the cannonball but states that it is worth it.

Owen is shot out of a cannon.

Owen flies toward the Team Amazon's boat after firing himself from his team's cannon...

...and completely destroys it.

Heather and Alejandro are seen having a moment...

...then Chris calls Team Amazon for elimination, while Ezekiel has a cameo in the background.

Chris reveals that it was a reward challenge and Courtney is not really eliminated.

Courtney is relieved that this was a fake elimination ceremony...

...while the others groan in displeasure.

Retrieved from "https://totaldrama.fandom.com/wiki/Sweden_Sour?oldid=1644874"
Community content is available under CC-BY-SA unless otherwise noted.