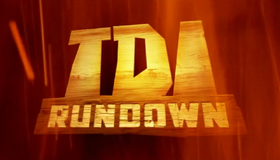 December 4, 2008
As each and every camper was eliminated, there has not been an episode to review what has happened throughout the entire season. With the finale coming up, the host recaps all the events that lead up to the end; this is the Total Drama Island Rundown!

The episode focuses on Chris, who covers the whole season of Total Drama Island up to the previous episode. The campers only appear in flashbacks and brief clips, as this episode does not take place on the island and ultimately has no effect on the plot of the series. The main purpose of the episode, as indicated by the title, is to give a basic rundown of the entire season up to this point. In particular the rundown focuses on the eliminations, the order of which they happened, and how each elimination happened. A brief clip of the eliminated campers is shown as Chris talks about them, with a large red circle with a line through it appearing over their head at the end of the clip, accompanied by a loud buzzing sound.

In addition, intervals between narrations allow Chris to talk a little bit more about the show itself. He also takes some time describing a few of the more "interesting" campers this season, such as Heather, Izzy, and Owen. Also, a special feature in this episode is the airing of some of the campers' audition tapes, which are shown throughout the episode. The two major events in the episode that are the most-mentioned throughout, and saved for the very end, are: a music video of an extended version of the theme song, featuring clips of all of the campers; and a sneak peek clip from the finale, where each of the twenty previously eliminated campers come on-screen, choose who they want to support, and then listen as the two finalists explain what they would do with the money if they win.

Just before Chris signs off the episode, he mentions the final two; Owen and Gwen. At that moment, he stops briefly to point out the uncanny similarity between their names, as both finalists' names have four letters, and the last three letters are "wen". Afterwards, he then signs off the episode.

There is a music video featured in this episode. The music is the theme song and it shows various clips of the campers from past episodes, however, there are special effects added, such as the screen changing colors and hues, along with various sound effects, as well as extensions of the instrumental bridges to make the video longer than the actual theme song.

Retrieved from "https://totaldrama.fandom.com/wiki/TDI_Rundown?oldid=1577314"
Community content is available under CC-BY-SA unless otherwise noted.