The LARPers with Leonard

None Down, Eighteen to Go - Part 2

Nicki Burke
Tammy was a Total Drama Presents: The Ridonculous Race contestant as a member of The LARPers with Leonard.

Much like her partner, Leonard, Tammy is a passionate LARPer (Live Action Role Player). She prefers to dress as a Viking and uses an ocarina as her weapon of choice. Just like Leonard, she believes she can perform magic, showing a very loose grip on reality and won't listen to anything against this delusion. Although she means well, she performs her "spells" at inappropriate times. Despite her determination in the game, she never passes up a chance to show off her magical skills to slow down the competition; as shown in the premiere, this is her fatal flaw and her immediate downfall.

Tammy makes her debut in None Down, Eighteen to Go - Part 1, alongside her partner, Leonard, a former contestant of Total Drama: Pahkitew Island. They first met in the ninth grade when they were both shoved into the same locker. Much like her partner, Tammy believes that she can use real magic, often in the form of an ocarina.

While waiting for their flight in None Down, Eighteen to Go - Part 2, the LARPers attempt to form alliances, with Tammy throwing confetti each time; however the other teams are not interested. During the final moments of the episode, Tammy and Leonard are among the final three teams remaining. When the other two teams begin to catch up with them, the LARPers decide to use their magic to gain the advantage. This temporary delay causes the LARPers to earn last place and eliminate them from the race. Tammy tries to cast a time reversal spell only for Don to berate her effort. As the two walk off, Tammy explains that they could have done a lot better, but she is glad they did this race together and have memories that they can share forever.

The LARPers appear in A Million Ways to Lose a Million Dollars with the other eliminated contestants, watching the final outcome of the race. After the winner is declared, they are with the others for the final group shot.

Tammy looking at something. 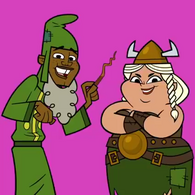 The LARPers waiting for the elevator to arrive.

The LARPers fail to form an alliance with the Adversity Twins.

The LARPers are the last team to reach the spice kiosk.

The LARPers pass up Dwayne and Junior.

The LARPers come up with the idea to use magic to slow down the remaining teams.

Tammy rushes for the Chill Zone.

The LARPers are the last team to reach the Chill Zone.

The LARPers make their departure.

Retrieved from "https://totaldrama.fandom.com/wiki/Tammy?oldid=1592844"
Community content is available under CC-BY-SA unless otherwise noted.