The Mom & Daughter with Kelly

Bryn McAuley
Taylor was a Total Drama Presents: The Ridonculous Race contestant as a member of The Mom & Daughter with Kelly.

Coming from a wealthy family, Taylor was pampered at a young age by parents who showered her with everything money could buy. As a result, she is used to getting whatever she wants. Because of this, Taylor has become an ungrateful and rude daughter who often disrespects her mother, Kelly. In contrast, she appears to have a soft spot for her father, as he showers her with gifts and she believes they have plenty in common, such as the both of them having a dislike for avocados. Taylor has won many trophies and medals from various competitions and beauty pageants and thinks that she is skillful in everything she does. She believes in her prowess so much that she blames any and all faults to her mother whenever they face difficulty in the Race. In reality, however, Taylor is poor in almost every physical aspect, and it's revealed in Hawaiian Honeyruin that all of her awards were given to her by her father, who bought a trophy store, while her beauty pageants were faked. After being told this by her mother and punished by her, Taylor was devastated and slowly begins to see the error of her ways and warms up to her mother.

Taylor is first introduced in None Down, Eighteen to Go - Part 1 along with her mother, Kelly after the introduction of the Best Friends. The first thing Taylor talks about is how attractive she is. Her mother chimes in, saying that she hangs out with her daughter's friends, and that sometimes, people mistake the two for sisters which horrifies Taylor. She seems confident on her chance of winning and states that she hopes her mother will not slow her down. They choose to do the Scare challenge, and despite being with the last group of pairs to the skywalk, they make it onto the second flight to Morocco. In None Down, Eighteen to Go - Part 2, they fall behind due to Kelly easily tiring out and not being able to keep up with her daughter while running. However, the two manage to finish in thirteenth place.

In French is an Eiffel Language, Taylor is the one who has to draw the caricature, which she seems confident about, believing herself to be one of the best artists in the world. Her caricature scares the judge, but Kelly still asks to keep it in order to show it to her plastic surgeon. In the end, they manage to get eleventh place. The two work together in the following episode, however Taylor becomes more disrespectful of her mother in Bjorken Telephone, where Taylor leaves Kelly to do all the work in the pronouncing challenge. When they fail to pronounce the Icelandic phrase to the Icelandic girl, Taylor makes her mom go back to hear the phrase again by herself. Due of this, they receive a one hour penalty from Don and after some tense moments with the Rockers and Vegans, they finish thirteenth.

Surprisingly, Taylor and her mother start to work better together in Brazilian Pain Forest. Taylor is disgusted at having to travel with animals, and nearly quits the race, until her mother bribes her by offering to buy her a car. In Brazil, Taylor threatens Mickey in order to get the clue first, but Kitty reminds her that he was there first, making Taylor bitterly comply. Taylor easily gets the tip from the ant-filled mitt by blowing on it, stating in an interview that she has powerful lungs from years of temper tantrums. After hesitating to swing on the vine, Taylor is ordered by Kelly to stop complaining and listen to her. Stunned by her bluntness, she complies, and the two work well together during the challenge. Taylor is impressed by her mother's skills, even giving her genuine compliments throughout the episode. She asks her mother if she is drinking protein shakes, then tells Kelly that those shakes will go to her hips.

However, these good terms between them doesn't last and Taylor returns to her hostile nature in Hawaiian Honeyruin, and resumes her constant berating of her mother's lack of skill. While on the donkey carts, Taylor tells Junior how lucky he is that he gets to race with his dad. Taylor reveals that she is much closer to her father than her mother – both enjoy being successful and hate avocados. Kelly describes Taylor as somewhat of a daddy's girl. Taylor has a firm belief of her own athletic prowess, but she does not have the skill to back up her claims and struggles to swim during the challenge. Despite this, Taylor's cockiness grows, and she sees herself as better than her mother. This causes Kelly to finally lose her patience, and she harshly reveals that all of Taylor's achievements and awards, including her swim trophies and beauty pageants, were bought by her father using her family's ample money. Taylor is stunned by this revelation and is distraught by the truth of her lack of talent.

In Hello and Dubai, Taylor is angry with her mom for her previous revelation, not even wanting to sit next to her on the plane. After arriving at the Burj Al-Arab, Taylor and Kelly decide to "Serve" for the Either/Or challenge after seeing the Sisters dangling precariously from the window washing platform. Taylor starts to boast about her skills in tennis, only to be reminded of what her mom had said earlier. After seeing the danger of the tennis ball launcher, they decide to wash windows in the "Squeegee" challenge instead. Taylor continues to be rude to her mother and grows more snide and irritable during the challenge. After finally finishing the windows, Taylor goes a step too far after a bird poops on her boot, prompting her to wipe it off on Kelly's sleeve. This pushes Kelly over the edge with her daughter's insolence as she hoists Taylor high above the ground on the window washing platform as a "time out". As they argue, Kelly pleads with Taylor to apologize to her and tells her that the next challenge is making their way to the Gold Souk.

Realizing that her attitude is keeping them from shopping, Taylor halfheartedly apologizes and Kelly lovingly accepts, helping her down. After arriving at the Dubai Mall, the two go on a shopping spree; however, they forget to check in at the Chill Zone and end up coming in last place. The two are cut from the race, but as they give their final statement, Taylor is shown to have a higher appreciation for her mother; however Kelly reveals that she is cancelling Taylor's allowance, much to her shock.

Taylor reappears with Kelly and the other eliminated pairs in A Million Ways to Lose a Million Dollars, watching the finalists race to the finish, and is one of the few to voice her opinion. She and her mother seem to be on good terms with one another. She claims to not be upset about her early elimination, happy to avoid some of the later disgusting challenges. She is seen with a scowling expression on her face throughout the rest of the episode, including the final group shot.

Taylor about to jump. 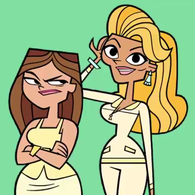 Taylor and her mother are introduced.

Taylor and her mother fail to reach the elevator in time.

Taylor brags on her artistic skills.

Kelly and Taylor work on their sand castle.

Mom and Daughter are penalized.

Taylor kicking a goat out of frustration...

Taylor threatens Mickey to get the clue first...

...but Kitty reminds her that he was there first.

Taylor easily gets the tip.

Taylor and her mother about to cross the gorge.

Taylor and Kelly complete the challenge.

Kelly tells Taylor the truth about her trophies and medals.

Taylor during the challenge.

After discovering her mother's lies, Taylor gives her an even harder time.

Taylor goes too far with her disrespect towards Kelly...

...and is finally given a time out.

Mom and Daughter and the Best Friends are in the bottom two.

After reconciling, Taylor and Kelly are eliminated.

Taylor and Kelly commentating on the finale.

Retrieved from "https://totaldrama.fandom.com/wiki/Taylor?oldid=1567641"
Community content is available under CC-BY-SA unless otherwise noted.