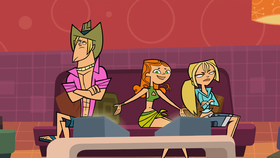 Ginger and Steve the Yeti
Two previously eliminated contestants host this season's new feature: a behind-the-scenes talk show. The non-returning contestants are back to provide commentary, with two others guest starring.

A snide remark is overheard from Eva, prompting Geoff to introduce the eight castmates from last season who did not qualify for this season: Cody, Noah, Ezekiel, Eva, Katie, Sadie, Courtney (who is busy talking to her lawyer, Michael, about suing the show), and Tyler. Bridgette and Geoff explain that they will read messages and texts from the viewers, and have some viewers on live webcam. The two reveal their guest stars for this episode: Izzy and Trent. Bridgette mentions how bad she feels about Trent's situation, which Katie and Sadie wholeheartedly agree with.

Before introducing Izzy, the hosts show a video containing various clips of her during her short time on the season, finally calling on her to appear. Izzy walks out to join Geoff and Bridgette on stage, and they begin their talk show segment. However, before they can ask her questions, she notices her old boyfriend, Graham, in the audience, and mentions how the restraining order he filed against her put a strain on their long distance relationship. Geoff starts by asking Izzy how it felt to be the first one voted off the show, but she returns the question by asking him how he felt. Bridgette reminds Geoff that they were the first to be voted off, and he starts to recount what he was feeling at the time before stopping himself upon realizing he was not asking questions. Bridgette asks how it had felt not getting a Gilded Chris Award, and Izzy starts to cry while explaining herself. When asked if the memories were too painful to bring up, Izzy reveals that she can't lie due to an implant in her neck that shocks her at the first sign of dishonesty.

Geoff introduces a game called Truth or Hammer, where they ask Izzy questions, and if she answers dishonestly, a hammer will fly down to knock her off her seat. Bridgette asks the first question: "Where did things go wrong for E-Scope?" She replies that it was when she turned down a secret alliance with Chef, which shocks the audience and the hosts. A never before seen clip shows Chef offering Izzy help in manning up, so long as they split the prize money evenly. Izzy responds by kicking him in the chest, scaring a nearby intern. Geoff points out the fear in the intern's face, and the same intern, in the Aftermath studio at that time, runs away in fear. Izzy mentions that Chef likely made a deal with DJ. Bridgette takes a message from a viewer, who asks if Izzy thinks DJ will be busted, to which she replies that she busted her arm, and is now double jointed.

Bridgette starts introducing Trent, sympathizing with what happened to him, while blaming Gwen for him being voted out. Geoff quickly disagrees, citing that Trent's superstition with the number nine, and general weirdness, made their relationship unstable. Bridgette mentions Trent missed out on the prize because of Gwen, and Geoff unknowingly reveals to a watching Trent that Gwen went behind Trent's back to have the Grips vote him off. Trent, watching from the green room backstage is completely shocked. Upon realizing his mistake, Geoff apologizes, but also points out that the Grips would've voted him out anyway for throwing challenges. Bridgette agrees, but firmly believes that Gwen double-crossed Trent to save herself. Geoff reminds everyone that Trent kissed Heather, but Bridgette retorts that Heather kissed Trent. Geoff lets slip that he doesn't need to be tricked into kissing the hottest girl on the show, which angers Bridgette and causes the two to fight. Izzy tries to step in with a distraction until the show goes on break.

The commercial shown is an advertisement for Chef's Roadkill Café, then the show returns. Izzy joins Geoff and Bridgette on the main couch to talk about Trent and Gwen, with Geoff on Team Gwen, and Bridgette on Team Trent, and Trent still in the green room sobbing. They show a video recapping their relationship over both seasons before Izzy asks the losers how they feel about the whole ordeal. After remembering how Trent kissed Heather, Sadie switches her support from Team Trent to Team Gwen, causing a fight between herself and the dissenting Katie. Cody is on Team Gwen, because of the bra she gave him, and Courtney, too, is on Team Gwen because she thinks Trent is a loser by choice. Izzy wants to bring out Trent, who is now playing his guitar while crying.

Trent joins them on stage and Bridgette asks what happened. Trent truthfully answers that things were fine until they were split up, though mentions things got rocky when Gwen and Duncan started hanging out, much to Courtney's disgust. The hosts bring up Trent's strange obsession with the number nine, and show the clip of Duncan explaing his reasoning to Gwen. Trent explains that when he was a kid, his grandfather gave him a toy train. Right before he died, the train lost a wheel and only had nine, which devasted him, but his mother turned it into a positive by making nine his lucky number. This story moves Sadie, Katie, and even Courtney enough to make them switch over to Trent's side.

Geoff and Bridgette introduce their first video guest, Ginger, who describes herself as a Trent fanatic, and shows off a stuffed doll she had made to resemble Trent, much to his horror. Before she can scare Trent any further, her video is cut off. The next guest is Steve the Yeti, who claims Chris is the best host ever and asks how Geoff and Bridgette got a show. He is interrupted by Chef, who calls the Yeti Chris, asking about getting into a hot tub together. Chef joins Chris on camera to tell the audience not to trust anything Izzy says. Afterward, Geoff gets a call from someone that believes both Gwen and Trent stink and announces their support for Team Eva, though it's found that Eva is making the call.

The final segment of the show, called "That's Gonna Leave A Mark!" shows various unseen footage of castmates being hurt by different objects. After the clip, Trent asks if he can sing a song he wrote after he and Gwen broke up. The entire cast, except Noah, are moved by the song, and Geoff and Bridgette share an embrace. Geoff apologizes to Bridgette and the two begin making out. Bridgette says they will be hosting the Aftermath all season, and the show ends. At the very end, the two are still making out as the studio is swept by an intern and the lights are turned off.

Katie and Sadie stand outside Trent's dressing room, with the latter knocking and begging him to come out. Katie comments on his hotness, and Sadie agrees, though expresses disappointment that he has a girlfriend. Katie corrects her on the matter, but Sadie replies that she, herself, is Trent's girlfriend, but he doesn't know it yet. Katie accuses her of stealing him, sparking an argument between the two. As they bicker, Trent sneaks out of his dressing room, gesturing to the viewer to be quiet.

Courtney talks to her lawyer, Michael, in preparation of suing the show.

Sadie barfs in her mouth at the thought of Trent's break-up.

Izzy on the stage.

…and making sure it's dramatic.

Izzy claims that when she lies she gets electroshocked.

Bridgette asks a question to Izzy.

Geoff accidentally tells Trent that Gwen convinced the Killer Grips to vote him off.

Bridgette slaps Geoff after he says that Heather is the hottest girl on the show.

Izzy makes a distraction with her eyes.

Izzy asks Geoff and Bridgette which team they're on.

The commentators' reaction to Trent's singing.

Trent explains his obsession with the number nine.

Courtney swears that Duncan is going to get what he deserves.

Cody reveals that he still has Gwen's bra from season one.

The aftermath guests are shocked to see Trent's depressed state.

Katie and Sadie want to be Trent's girlfriend.

Katie and Sadie get in a fight over Trent.

Steve the Yeti says Chris is the best host ever…

…but Chef accidentally spills the beans, not knowing that Chris is on the webcam.

Eva gets caught talking on her cell phone.

Duncan in the "That's Gonna Leave A Mark" segment.

Duncan and DJ in the "That's Gonna Leave A Mark" segment.

Lindsay and a crab in the "That's Gonna Leave A Mark" segment.

Beth ties herself up and is about to fall down in the "That's Gonna Leave A Mark" segment.

Chef falls in the "That's Gonna Leave A Mark" segment.

As Geoff signs off, Bridgette continues to kiss him.

"Can we get a hammer down here?"
—Izzy

Geoff and Bridgette, still kissing, put their legs up for a sweeping janitor.