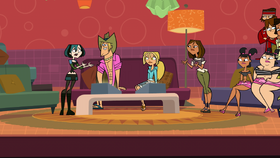 Gordon and Kelsey
The Aftermath show returns with two ex-castmates in the hot seat, but trouble erupts when someone attempts to boost viewers with harsh segments and embarrassing clips of the guests, which push apart the two hosts. Someone's behavior on the show made her lose a lot of her friends from the previous season, but one person manages to save her relationship with everyone in the studio.

Bridgette and Geoff welcome the viewers back for another episode of Total Drama Action Aftermath. Bridgette introduces the people in the peanut gallery, as Trent and Izzy join them. Katie starts to flirt with Trent, only to have Sadie argue that only she gets to flirt with him. Bridgette realizes Geoff has left and asks Courtney if she has anything to say about the three shocking eliminations, to which Courtney says her lawyer advised her not to comment on the current circumstances. Geoff returns as Bridgette says she is glad that she was eliminated before all the chaotic challenges took place. Geoff then starts a segment called "That's Going to Leave a Mark," showing all the times during the past episodes in which someone got hurt. Bridgette then tells Geoff that he shouldn't just leave her alone on live television, to which he responds that he had seven strands of his hair out of place, and had to fix them.

The first interview guest is DJ, whose mother comes out on stage to sit with the commentators. After Geoff returns again, Bridgette shows what has happened to DJ over the past few episodes. He finally comes out, and says that at least he still has his integrity. Geoff says that's dumb and asks if anyone agrees. Ezekiel, who was the only one to agree, claps, which Geoff thanks him for. Geoff then starts a game called "Truth or Anvil" (which has changed from Truth or Hammer since the producers thought an anvil would be more entertaining than a hammer). Worried about DJ's safety, Bridgette instead has Geoff show clips of his time on Total Drama Action. This reveals that Chef supplied him with new clean clothes and vitamins to help him perform better, as well as other treats. DJ also reveals in the clips that he enjoyed it and was cool with it. However, at DJ's mother's threat towards Geoff, clips reveal that Chef is in the confessional with him, and made him say such things.

Geoff tries to get DJ to lie so the anvil would fall, but Bridgette cuts to a fan of DJ, Gordon from London, Ontario, who is a chef who can't figure out the secret ingredient to DJ's sandwiches. DJ says he does not use a recipe, causing the anvil to fall, but he dodges it at the last minute by jumping. DJ's mother hands out sandwiches to everyone except Geoff, who refuses to eat it. When he reveals he is not eating it to stay thin and also insults Bridgette's weight in the process, Bridgette furiously attacks him and attempts to shove some sandwiches down his throat.

After returning from a commercial break, Bridgette successfully gets a sandwich down Geoff's mouth. He starts to like it and eats more. Gwen comes out next, though she is hesitant to face everyone for her past actions. Geoff then airs a clip that reveals that Katie and Sadie dislike Gwen, as they created a club that is meant to bash her. When Bridgette asks the two to comment, they are too busy flirting with Trent. Bridgette asks Gwen how she feels about her betrayal of Trent, which Gwen blows off by insisting they talk about something else. Geoff, however, refuses to let it go since he thinks it will boost ratings and he draws Gwen into a game of Truth or Anvil. An angry Bridgette warns Gwen about what she says, to which Geoff gets upset. Gwen reveals she still likes Trent and everyone else which touches Trent and angers Courtney when Duncan is brought up.

Geoff states that Gwen didn't leave many friends behind in the competition due to her actions. When Gwen tries to counter this by saying that Duncan didn't vote her off, Courtney stands up and angrily says that it's only because Gwen had her "goth girl hooks" in him, with the studio audience cheering at her outburst. Gwen tries to make peace with her, revealing that Duncan is always thinking of Courtney. Geoff then shows some clips involving Gwen and Duncan on a bridge. Though Courtney is happy for a moment when she sees Duncan dream about her, as Duncan looked up at the stars and wondered if Courtney was doing the same. Geoff plays the clip further and reveals Gwen falling on the ground with Duncan on top of her after the two play-wrestled. When seeing how close their lips were (aided by Geoff manipulating the viewers and the peanut gallery by making implications about what happened between the two), Courtney's jealousy gets the better of her and she storms off the stage to talk to her lawyer, despite Gwen insisting that they just got up and stole everyone's underwear afterward.

Geoff then starts another game in which Gwen will be put on a seat that is situated over a piranha pool. Bridgette protests, but Gwen accepts the dare. Trent steps in and reveals he alone rigged the Grips challenges and that Gwen was not to blame, saving her from having to perform the stunt. He then tells her that they are even, as he is now popular with the ladies. Gwen then apologizes for how everything went down. Geoff reveals that Trent has been getting a lot of fan mail. Another fan of Trent, Kelsey, calls in, revealing she has a Trent doll while kissing it. She then reads a disturbing poem she wrote, which gets cut off.

When an intern brings in fan mail for Trent, Izzy is knocked out of her seat, revealing she is just a standee. The real Izzy swings in on a vine and lands over the piranha tank. She attempts to get a guest spot again (but can't due to an earlier appearance). Bridgette calls in Chef to take Izzy away, but she lures him into the piranha tank and escapes. A question from a fan (actually Bridgette under a false name) comes in to Gwen asking what to do about a bad boyfriend, to which Gwen says to be straight up. DJ asks Bridgette to be honest, to which Bridgette says the letter wasn't from her. The anvil then falls on DJ and Gwen, due to Bridgette, but DJ saves them both. This prompts Geoff to make another insinuation about Gwen, saying that she is getting all "cozy" with DJ. Gwen believes that the anvil was for Bridgette. Bridgette then ends the show and grabs Geoff by the ear. Having finally had enough of Geoff's antics, she then drags him backstage and tells him that they "have to talk."

Gwen sits in the green room reflecting on how everyone "really let her have it," adding that having to face Trent again was difficult. She talks about his popularity and seems disappointed by his massive amount of supporters. She appreciates how he stood up for her, considering that maybe he still likes her because he did so. At this moment Trent walks by, laughing, with his arms around Katie and Sadie. Gwen, hanging her head, sadly dismisses the possibility.

Katie and Sadie argue over who gets to greet the viewers.

DJ tells Gwen that she probably won't fare well out in the open.

Gwen is unsure about going on stage.

DJ and Geoff high five when DJ is introduced.

DJ's mom claps for DJ when he enters the Aftermath studio.

The peanut gallery eat sandwiches made by DJ's mother.

An exclusive clip reveals that DJ has received fresh laundry from Chef.

DJ has also gotten performance enhancing products from Chef in another exclusive clip.

Chef scares DJ in a clip.

Geoff tries to convince DJ to lie in order to bring up the ratings.

Owen getting hit in the face by Chef's book in "That's Gonna Leave a Mark" segment.

Harold hits himself with a Num-Yo.

Owen falls into the sewer in a never-seen-before clip.

Gwen hitting Harold over his head with a shovel.

Gwen is hit by Leshawna with a spoon.

Gwen is pushed by Chef to the studio.

Gwen is saddened because of her reputation with her cast mates.

Bridgette warns Gwen about the anvil.

Katie and Sadie talk about their Anti-Gwen Club.

DJ thanks Gwen for complimenting him.

Duncan is thinking of Courtney, while Gwen disagrees with him.

Courtney is angered due to how much time Gwen spends with Duncan.

Kelsey shows her Trent doll to the aftermath cast.

Trent is freaked out after seeing Kelsey's doll of himself.

Izzy is revealed to have put a cardboard standee in her place.

Izzy leaps onto the Piranha Pool's board.

Izzy invites Chef to try and catch her.

Chef moments before being dunked.

Chef in the pool of piranhas, courtesy of "Esquire".

Geoff is bitten by a piranha.

An anvil falls due to Bridgette's lie.

Geoff leaps onto Bridgette's lap after the anvil falls.

Bridgette pulling Geoff by his ear.