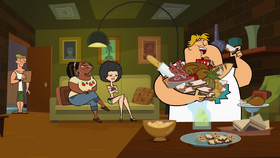 Owen's mother and Harvey
It is another episode of the Total Drama Aftermath, with not one, not two, but three former castmates taking the stage for an exclusive interview about their time on the show. However, trouble ensues when one host finally becomes fed up with her boyfriend's new attitude to the point that she breaks up with him on live T.V. It takes several people and a shocking therapy to finally make Captain Hollywood realize the error of his ways.

Geoff and Bridgette host another episode of the Total Drama Action Aftermath. It quickly becomes apparent that there is still tension between the two of them. Geoff announces that Bridgette wants more "humanity" on the show, making it clear that he disagrees with her. Bridgette reminds Geoff that the people who he is manipulating for ratings are his friends, and comments on how they have already lost the competition, and that loss is punishment enough. Geoff then reminds her that the Aftermath is not like normal talk shows and that it is still technically a reality show, and the eliminated castmates still have to deal with some torture. He then goes on about how real talk shows have much better lighting, clearly annoying some of the workers who have been seen on the set previously. He comments that the former castmates are free to talk about all their problems, but that he won't help them feel better. Geoff and Bridgette then get into another large fight, which leads to Bridgette calling Geoff a "Chris clone." Geoff brushes it off, and the two go back to hosting. They introduce the ex-castmates in the VIP section, with DJ and Gwen joining them. They then begin to talk about their three guests for the episode.

They soon bring out their first guest, Owen, who greets Izzy, Geoff, and Bridgette. However, he is sent straight into the "Truth or Electrocution" segment. With his arms full of food, Owen begins to participate, and after Trent tells Owen to "tell the truth," Owen panics and starts going through a long list of wrongdoings he did as a child since he believes it is what "telling the truth" was about. Geoff then begins to ask Owen questions about how he feels towards people who had done him wrong during his time on the set. Owen reveals that he isn't holding a grudge against anyone. Owen makes it through without being shocked by the chair, showing his surprising level of indifference towards Courtney and Chef Hatchet. Geoff then tells Owen that his family is broke after they spent $50,000 on a cheese cellar, hoping to anger him. Though this does not bother him too much either. He is even happy to discover that his family now owns a cheese cellar. Owen then gets the chance to talk to his mother about it via webcam and asks her to save a lot of cheese for him.

Meanwhile, Bridgette and Geoff are seen having another fight, due to Geoff's sadistic treatment of Owen, and making fun of his idea of promoting cheese on air. Bridgette then says that she doesn't even know who he is anymore, and finally, breaks up with him. Geoff seems slightly crushed while the "That's Gonna Leave a Mark" segment airs and before the commercial break, Owen comments on how "shocked" he looks and that Geoff suffers a bigger shock than he did. After the breakup, the pair is shown to still be arguing with each other. Bridgette begins to talk through Owen to Geoff, and Geoff insists that they, themselves, should talk about it. Bridgette, while ignoring Geoff, announces the next two guests. Heather and Leshawna then come out and are brought right into the "Truth or Electrocution" segment as well. Geoff announces that he will do all of the talking from that point on. Leshawna is surprised by the chair, while Heather is indifferent.

Heather starts off the segment first, talking about how her parents attempted to use electrocution to make her nicer. She then says that they can shock her all they want and manages to lie on every question she is asked while being shocked every single time. She is proven to think that Courtney is a solid castmate, that Lindsay isn't as dumb as she seems, and that she thinks Beth may be a threat. They then stop questioning her, and Bridgette shows a never-before-seen clip of Heather playing with "num-yos" near Harold, allegedly taped with Courtney's camera. The audience then laughs at her, as do Leshawna, Geoff, and Bridgette. Heather complains at Leshawna laughing at her, but she reminds them that they are still friends, though the video is still funny. They then move on to Leshawna.

Bridgette is worried about the means of finding information, while Geoff affirms that he will "go easy on her." Leshawna is first asked whether or not she considers Heather to be a friend. Leshawna responds positively, saying that Heather stood up for her, and states that it is worth a lot. Leshawna next admits that she would have been mad at herself too if she was in the other castmates' place in relation to the video where she insults them behind their backs. Harvey then appears on webcam, asking if there is still hope for Harold and Leshawna. Leshawna claims that they are "just friends" and that is "all they'll ever be." Geoff is intrigued and asks Leshawna how she feels about Harold, revealing a never-before-seen clip similar to Heather's, only that Leshawna is seen staring at Harold admiringly. Leshawna then admits that she still likes Harold, but only as a friend.

Leshawna, after getting unstrapped, protests to Geoff, stating that he used to be a real nice guy, but now is "all kinds of nasty." Bridgette and Owen concur while Heather says that she is proud of Geoff's new attitude, due to it being similar to hers. Bridgette, Heather, Leshawna, and Owen all force Geoff into the electric chair for a change, in consent with Bridgette's idea. Bridgette then asks him if the "new him" is really him. He lies and says it is "the new him all the way," and gets shocked. Heather asks Geoff about who he thinks is the hottest girl in the show, which annoys Bridgette. They end up asking him what he thinks about Bridgette, to which he answers that he is crazy for her, after getting shocked yet again due to saying that he "doesn't need her." Geoff apologizes, and Bridgette, pleased about how he feels about her, makes up with him. They sign off the episode and begin to make out. Owen then causes the electric chair to go off, which creates a power outage in the entire studio, prompting him to end the show with an apology.

The exclusive clip shows that power was able to be brought back to the studio. Geoff has been placed on a stretcher after his ordeal in the electric chair. Bridgette is at his side, tending to him, while Owen sits in their hosting chair talking about the device. He is happy that he was able to help Bridgette to turn Geoff back to his old self. He states that Geoff forgot that there are things in life to be thankful for. Owen excitedly brings up that now he has a cheese cellar to enjoy. He jumps up and starts dancing, hitting the stretcher and sending Geoff backstage with a loud crashing noise. Owen apologizes for his mistake.

Geoff and Bridgette welcomes the audience.

Owen will be a guest on the aftermath…

…along with Heather and Leshawna.

The interns get angry at Geoff and threaten to hurt him.

The peanut gallery are reminded by Geoff that they have lost the million dollars.

The peanut gallery is shocked when Geoff accidentally insults Bridgette.

…and calls him a Chris Clone.

In his clip, Owen scarfs down food…

…drinks through a straw…

…leaves with his head held high…

…even at his low…

…and gets booted off the show.

Izzy is excited to see that Owen is at the aftermath.

Izzy rides on top of Owen…

.. steals some fried chicken from him…

Geoff prepares for something extra.

An intern tests the electric chair.

Bridgette doesn't want Owen to participate in the "Truth or Electrocution".

Trent tells Owen to just tell the truth and he'll be fine.

Owen admits that he cheated on his math test.

Owen kicks his brother down the stairs…

…and blames his other brother.

He went to fat camp one summer…

Finally, he blended a concoction…

…carries it to school…

…and pours it on a group of nuns and children.

Geoff reminds Owen what will happen to Owen if he lies.

Geoff tells Bridgette that he wants to ask Owen one more question.

Bridgette is flattered by Owen's compliment to her.

Bridgette breaks up with Geoff.

A moment from the "That's Gonna Leave a Mark" segment…

…and ends with Sasquatchanakwa attacking Chef using a golf club.

Sasquatchanakwa flips Chef off in the "That's Gonna Leave a Mark" segment.

Heather participates in the "Truth or Electrocution".

A never-before-seen clip shows Heather practicing with some num-yos.

Leshawna laughs at Heather, but confirms that they are indeed friends.

Leshawna participating in the "Truth or Electrocution".

Leshawna admits that she likes Harold and calls him her "sugar baby".

Bridgette tells Heather her plan to get Geoff to his old self.

Tyler, Cody and Noah are smile as Geoff is forced into the electric chair.

…signs off the show…

…and Owen calls their relationship a real spark.