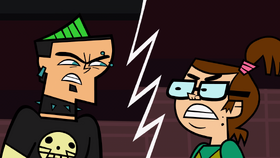 Beth (USA, Canada, Denmark, Norway, Latin America and Philippines)
Duncan United Kingdom, Croatia, Poland, Italy, Romania, Hungary, Netherlands, Australia, Sweden, Israel, Brazil, Portugal, Russia, Serbia, France, Finland, New Zealand, Ireland, and Turkey)
Season two finally reaches its epic conclusion… with a tie? The hosts are missing, and a winner has yet to be decided. As tensions rise, the two finalists attempt to find a way to break the tie and eventually are asked various questions by the eliminated contestants, who then vote for the winner. In the end, one is declared the winner, receives the money, and reunites with their lover, while the loser goes home with a "consolation prize."'

The episode begins from where the last episode left off, with the ex-contestants at the aftermath studio shocked about the tie between Beth and Duncan. The finalists are both very annoyed at the matter, with Duncan demanding to know if there's a plan for such a scenario. Geoff states there is none, as nobody expected a tie to occur. But, since they are all together, Geoff decides that they should start "partying," and they begin showing clips from the season. Meanwhile, Chris and Chef are at an airport, leaving for their vacation. Several fans gather around Chris and a woman even requests his autograph, much to Chef's annoyance.

At the studio, the contestants contemplate the fact that this is quite possibly the last time they will all be together, which Bridgette and Geoff seem to be sad about. Leshawna agrees, however, she angrily states that they should just pick a winner and go home. Instead of doing this, Geoff and Bridgette begin to show clips of major injuries during the season, as well as a few embarrassing never-before-seen clips of Chris. While at the airport, Chris ends up seeing what is going on with the show (which is on live television), becomes horrified, and back to the studio with Chef to stop it. Chris says that he wants a third season, but the contestants could ruin it. He insists on rushing and yells at Chef about the traffic claiming that Ryan Seacrest's driver could get around the heavy traffic.

Meanwhile, Geoff and Bridgette finish showing the clips, and Duncan starts to complain. Courtney then announces that she has a plan. She says they should have a "completely unbiased" quiz show, winking at Duncan as she does so, but the others unanimously deem that idea to be lame. Harold then announces a plan to do a contortion challenge. The two will have to contort their bodies in different shapes to make it through a conveyor belt. During this time, Chris and Chef end up at Camp Wawanakwa, due to Chris's poor directing of the driver. The two finalists begin participating in Harold's idea, however, they end up tying once again, as Beth falls and then Duncan fails immediately after. Many people become frustrated at this point, especially Eva. They begin showing more embarrassing clips of Chris until Chris himself finally shows up and yells at them. He forces Geoff and Bridgette out of the way and then declares himself the host for the rest of the Aftermath.

Chris then begins to show footage of Beth and Duncan, and then additional footage of the sides of them that aren't normally seen. Duncan is shown being nice to other castmates while they are sleeping, while Beth is shown being selfish. Both are embarrassed by the footage. The castmates are then subjected to questions by those who had been voted off. Geoff and Bridgette are not present because they are making out behind the scenes, so Trent goes first. He begins to ramble on about a hypothetical situation that sounds similar to his situation with Gwen. Then, Izzy challenges the two castmates to have a battle of break dancing. Gwen then questions them about how they'd help the environment if they won. DJ then asks them another hypothetical question, which Beth correctly answers. Owen challenges the two to hold an eating contest, which Duncan and Beth reluctantly do. They get sick and queasy. Right as they are about to move on, Duncan lets out a belch.

Heather states that she already knows who she's voting for, then goes into a rant about how she deserves to be in the final two and win the money more than both of them. Leshawna then asks them what they will do with the money. Next, Justin asks them if he is still attractive. Lindsay then states that she is going to vote for Beth, without asking a question. Harold then challenges them to draw pictures of an imaginary animal. Beth does; however, Duncan draws a cross between a samurai sword and a stealth bomber, which still intrigues Harold. Courtney is shown about to ask a question, but she's cut off by Chris. The ex-castmates then vote in a bathroom stall. Most of them end up voting and Chris slowly announces the votes.

The winner, in the end, is Duncan. Courtney runs up to him in joy and hugs him. Duncan questions her, saying that he never said he'd share the money with her. She then kisses him and says that every king needs a queen, which Duncan happily complies. The crowd and the eliminated contestants cheer as the couple reunite and make-out. Meanwhile, Brady enters the stage and hugs Beth to console her for her loss, leaving her happy. The losers, upon seeing him, are incredulously surprised at his existence. Heather remarks on how handsome Brady is, and Justin remarks on how his sudden appearance continues to fuel his insecurities about his looks. Beth comments that Brady is the only prize she needs and he cluelessly wonders if he was meant to bring something for her, leading to her happily stating that she doesn't mind losing the game. The screen pans out and shows the non-contestants cheering, Beth hugging Brady, Chef, and Chris grinning wickedly and Courtney and Duncan making out. Then Chris signs off the season, thanking the viewers for watching.
In this ending, Beth received the most votes and is declared the winner of the season. Many of the other contestants cheer and Brady comes in and hugs her, surprising the other contestants. Heather remarks on how handsome Brady is, and even Justin appears to be stunned by his attractiveness, now having regretted voting for Beth. Duncan walks up to a visibly disappointed Courtney and asks if she wants to leave with him to grab a bite to eat, to which Courtney replies that she doesn't usually eat with losers. Duncan grins and says that he usually doesn't either, but he still asked her anyway. Smiling, Courtney accepts the offer to grab a bite to eat with him. Duncan asks where she's going to buy him dinner, and she teasingly replies that she'll make him a knuckle sandwich. As they leave hand-in-hand, Courtney dials up her lawyers on her personal digital assistant. She says that she is planning another lawsuit due to the voting of the episode, thinking it's an "election fraud" and that Duncan should have won. Beth is held high by everyone as Chris throws the million-dollar suitcase to Beth, knocking her out. Chris then ends the show, thanking the viewers for watching.

Beth and Duncan are confused about the tie situation.

Duncan and Beth in the winner's seat.

One of Chris's fans.

Another one of Chris's fans.

The flight attendant sees Chris on the line.

Chris tells the attendant she can have his autograph.

Harold watching Duncan do the challenge.

Chris sleeping with a teddy bear in a never-before-seen clip.

A never-before-seen clip reveals that Chris is actually bald.

Chris singing in the shower in a never-before-seen clip.

The wind leaves Chris exposed when he leaves his trailer.

The humiliating clips of Chris are seen at the airport.

Chef is laughing at the clips of Chris.

Chris is horrified after he sees the humiliating clips.

The lame-o-sine is stuck in traffic.

Chris wants to get to the abandoned film lot quick.

Chris asks Chef if he wants to do a third season of the show.

Chris takes over the Aftermath.

Duncan puts Harold's foot back in his bed.

A never-before-seen clip showing Beth being greedy and mean.

Lindsay chooses to vote for Beth.

Courtney's screaming is muted by Chris.

Heather is disgusted by having to write on toilet paper.

Gwen does not disclose her vote, refusing to be predictable.

Trent gets queasy while trying to vote for the winner.

Courtney tries voting for the winner…

…but ends up getting inked in the face.

Chris is prepared to start reading the votes.

The first vote has covered in ink.

The vote obviously belongs to Courtney.

Beth and Duncan are nervous as Chris reveals the winner.

Duncan is declared the winner of Total Drama Action.

Courtney is extremely happy to hear that Duncan won.

"Every king needs a queen!"
- Courtney

Beth is happy upon Brady's appearance.

Brady thinks he was supposed to bring a prize.

Brady makes his way to the Aftermath studio.

Lindsay is happy for Beth.

Heather and Leshawna are surprised that Brady is real and good looking.

Justin wishes that he didn't vote for Beth because of Brady.

Beth is lifted up to celebrate.

Beth gets knocked out by the million dollar case when Chris throws it at her.