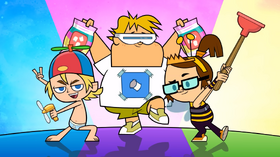 After watching a superhero show, four of the kids decides to form a superhero team of their own, but without a villain to fight, things start getting boring. Willing to do whatever it takes to play this make belief game, one of the heroes turns evil and confronts the heroes in the ultimate battle between good and evil.

Chef is busy in his office sorting through his taxes, only for Izzy to pop up and pestering him with a random question. Disgruntled, Chef asks her to leave and do something else, to which Izzy suggests flushing everything down the toilet. Chef almost agrees to this, before realizing his mistake and agrees to put on a movie for the kids by making it Movie Day. The kids watch a superhero movie which intrigues them. Inspired by the movie, Izzy suggest that they play a game where they are the superheroes: The Bad Guy Busters. The team, consisting of Owen as Marshmallow Man, Beth as Bee Girl, Jude as Dude Boy, and Izzy as Super Donkey. However they soon realize they can't be heroes without a bad guy, so Izzy suggests they find one.

The team try asking Duncan first, but to preserve his bad guy image, he cannot accept any favors including pretending to be bad. The team then asks Courtney and Harold, who both also decline. Disappointed that they are running out of people to be their bad guy, Izzy decides to ask Chef, but end up making a mess of his office. Infuriated, Chef makes the Bad Guy Busters leave his office. As the team gives up on finding a bad guy to fight with, Izzy notices Chef's weights. Coming up with an idea, Izzy snatches Chef's weights and leaves the office.

While the other three are playing at the treehouse, Izzy calls the Bad Guy Busters to duty as there's been an emergency. Someone has smashed Harold's toy Ferris wheel. Dubbing this villain "The Smasher", Izzy instructs her team to find any potential suspects. They ask Duncan, Courtney, Leshawna and Cody, but all of them deny responsibility. Jude then realizes that Chef is the only person they haven't questioned yet and the team (aside from Izzy who leaves to run some errands) enter his office only to be shooed out again. The Bad Guy Busters are running out of suspects, but their attention gets drawn when The Smasher strikes again. This time, the villain has smashed Courtney's 4x4. Izzy returns to the team and questions Courtney if she had seen the Smasher. Courtney couldn't remember as the Smasher moved so quickly, but Izzy presses on by instructing Courtney to draw the culprit with her eyes close. Courtney draws a portrait of Izzy wearing a mask with very large muscular arms. Despite Izzy's denial of not knowing who the picture was of, the rest of the Bad Guy Busters start becoming suspicious. With her cover blown, Izzy escapes by throwing a smoke bomb.

The Bad Guy Busters confront Izzy, now dressed as The Smasher and wearing Chef's weights, in the cafeteria. The Smasher immediately escapes the heroes by smashing through a wall. She then targets Cody who is playing on a see-saw by slamming on the opposite end, launching him into the sky. Owen tries to catch Cody, only for him to fail and result in a painful landing for the boy. Beth and Jude attempt to stop Izzy with their 'powers', but she fends them off easily. Izzy then goes back inside the daycare with the The Bad Guy Busters following her and are shocked to see her about to smash their favorite things. After destroying the dollhouse and computer, the heroes decide to combine her 'powers' before she can destroy the TV. Their joint effort manages to knock the Smasher to the ground and makes her lose her weights. Izzy admits defeat and collapses to the ground after giving the Bad Guy Busters her respect.

Chef enters the classroom to tell the kids that it is the end of the day and their parents have arrived, only to be shocked that the entire classroom has been destroy as a result of the kids' game. Izzy returns Chef's weights to him and thank him for lending them to her, angering Chef. The Bad Guy Busters congratulate each other and agree to play the game again the next day. Once they have left, Izzy promises them that they will be facing her again as the Lava Queen, where she dons her new costume of a model volcano on her head. The episode ends with Izzy's evil cackling being heard from outside the daycare.

Jude, Harold, and Izzy are playing "The Floor is Lava" by skipping on various furniture in order to get to the other side of the room before stopping on a table. Chef enters the classroom while holding a cup of Rainbow Juice and teases at them for running out of furniture to jump on, but as he takes a step into the room, Chef sinks into the floor.

Chef tells Izzy to go do whatever she wants.

Izzy wants to flush everything down the toilet.

Chef instead tells Izzy that it's Movie Day.

The kids watching a movie..

Eagle Hero tells Firewoman that they can rest now.

Firewoman tells Eagle Hero that since evil never rests, they can't rest either.

The movie ends with the super heroes flying away.

Izzy comes up with a new game.

The kids' reaction after they hear what Izzy's game is about.

.. dressed up as "The Bad Guy Busters"

The kids beat up the monster that stole Bridgette's lollipop.

Owen introduces himself as "Marshmallow Man".

Beth introduces herself as "Bee Girl".

Jude introduces himself as "Dude Boy".

Izzy introduces herself as "Super Donkey".

The kids go searching for a villain.

The kids ask Duncan if he wants to be a villain for them.

Duncan shows his tattoo to the kids.

Duncan doesn't want to play with the kids.

The kids ask Courtney to be bad for them but she refuses.

The kids ask Harold to be a bad guy for them..

Izzy thinks Chef should be the bad guy for them since he's "big, scary and mean".

Chef tells the kids that he can't play with them.

Chef orders the kids to get out of his office.

Izzy showing her "no idea" face..

.. and the face she'll make if she will ever get poisoned.

The kids find out someone destroyed Harold's creation.

Izzy calls the person that destroyed Harold's creation "The Smasher".

Courtney tells the kids that it wasn't her who destroyed Harold's creation.

Leshawna and Cody tell the kids that it wasn't them that destroyed Harold's creation.

The kids think that Chef is the "The Smasher".

Beth looks for an answer in her nose.

Chef tells the kids that he isn't "The Smasher".

The kids find out someone destroyed Courtney's 4x4.

Izzy asks Courtney to tell them how "The Smasher" looked like.

The kids ask Izzy where was she when Courtney's 4x4 got destroyed.

Izzy takes out a smoke bomb..

.. and uses it to get away from the kids.

The kids confront "The Smasher".

"The Smasher" is revealed to be Izzy.

Izzy explains how she turned evil so fast.

.. and sends him flying.

Izzy doubts the kids can catch her and save Cody.

Beth uses her powers to catch Izzy but fails.

Jude also uses his powers to catch Izzy but he also fails.

Izzy tells the kids that she'll smash all of their favorite things.

Owen uses his powers to catch Izzy but he also fails.

Beth thinks they should use their powers as a team.

The kids combine their powers to catch Izzy.

Izzy talks about how proud she is of The Bad Guy Busters.

Chef notices that the kids left a huge mess.

Izzy gives Chef his weights back.

The kids talk about how much fun the game was and that they should play again tomorrow.

Retrieved from "https://totaldrama.fandom.com/wiki/The_Bad_Guy_Busters?oldid=1589525"
Community content is available under CC-BY-SA unless otherwise noted.