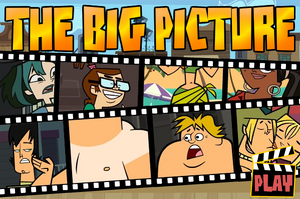 The Big Picture is a Total Drama Action game, produced by Cartoon Network and Teletoon.

In this game, the player takes photos of the original fourteen contestants who compete in Total Drama Action that are running across the screen trying to gain as many points as they can. The amount of money earned for each photo is as follows:

To proceed to the next level, the players must earn a certain amount of money within a set amount of time. If they fail to reach the goal, they are taken to a game over screen and are given the option to print or save their best pictures.

On April 4, 2011, adding on to the original part of the game, players became able to earn badges (just like in several other Cartoon Network games) for their profile by completing different tasks, such as taking a picture with two people in it and scoring 100,000 points or more. This is one of the first Total Drama games to have badges added to players' accounts.

In mid-2012, when the site was updated, the badge that was given when a player took a picture with four people in it has been removed. It hasn't returned (nor has it been replaced) since, and the game currently has five badges rather than six.

A picture of Duncan in mid-sprint.

A picture of Owen in mid-sprint.

A special picture of DJ having his picture taken behind scenery.

A rare picture of Bridgette on the Beach Set.

A rare shot with a couple and one person behind scenery.

The final two of the season in the picture together.

A good shot is ruined because Gwen's head is not in the picture.

Heather, Harold, and Leshawna feature a shot worth over 4400 points.

Izzy, Beth, and Harold in a triple shot together.

A shot that would usually be worth over 3000 is worth less because the picture is unfocused.

A goof in the game where Justin is wearing Trent's shoes instead of his sandals.

A goof in the game where Heather has her real hair back.

A goof in the game where Beth is still wearing her braces.

Beth and Justin are in a picture together.

Owen, Gwen, and Lindsay in a three-way shot worth many points.

A good shot is ruined because Geoff's body is not fully in the picture.

Geoff and Lindsay together in a shot, which ends up being worth $476.

A rare shot with Bridgette and Geoff together on the beach set.

Amateur Photographer:
Take a picture with two people in it.

Hobbyist Photographer:
Take a picture with three people in it.

Couples in Love:
Take pictures of two couples in a single game.

Game Master:
Get all badges for The Big Picture.

Retrieved from "https://totaldrama.fandom.com/wiki/The_Big_Picture?oldid=1550021"
Community content is available under CC-BY-SA unless otherwise noted.