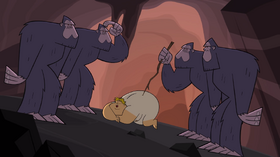 Eva
The two teams compete in a twenty-kilometer race and a buffet-eating contest, but they discover that their real challenge is an "Awake-A-Thon" to see who can stay awake the longest. Two campers start to bond, and the first alliance is formed. Meanwhile, another camper is sabotaged by a schemer and is voted off by her team.

The episode starts with Chris waking up the two teams by the sound of a loud horn. Leshawna abruptly wakes up, hits her head on the top bunk, and angrily asks Chris if they are keeping farm hours. Ignoring her, Chris announces that the next challenge begins in one minute with a twenty-kilometer run around the lake. Owen asks if there's breakfast, and Chris says there will be after completing the challenge. A grumpy Eva attempts to punch Chris upon hearing this, but is held back by Duncan and Geoff.

The run begins, with some campers actually running, and others simply walking. Heather sees a breathless Owen licking a puddle, but when he tries to explain his condition, she walks on him while continuing on, citing his condition to be overeating. Afterward, the tired campers gather in the main lodge, with an unconscious Noah being carried by Owen to a table where he attempts to revive him as his teammates look concerned. Harold, who wheezes to a scornful Courtney that he is having heart palpitations, finishes last; because of this the Screaming Gophers think they have won the challenge and earned invincibility. Chris interrupts their celebration, revealing that the run was not the challenge, and unveils a delicious banquet for the campers to eat.

The campers descend upon the banquet, grateful to eat real food after a week of Chef's disgusting meals. Once they finish, Chris announces the real challenge, called the Awake-A-Thon, where the last person awake wins the challenge for his or her team. The twenty-kilometer run and the banquet was to make it even more difficult for the campers to stay awake. When asked by Trent, Gwen predicts that it'll take an hour, maybe less, before everyone falls asleep.

Twelve hours into the challenge, Chris notes that all twenty-one campers are still awake, but Owen quickly becomes the first one to succumb to slumber.

Heather asks Beth and Lindsay to join their alliance, and they agree to do so. Then, Lindsay innocently asks if Tyler can join it, too, but Heather immediately rejects her idea, explaining to her that he is on the other team.

The Awake-A-Thon hits the twenty-four hour mark, and seventeen of the twenty-one campers remain awake, with Bridgette, Noah, and Izzy now asleep. Tyler slowly dozes off, but has a nightmare where Katie and Sadie are mauled by a bear. Chris decides to start reading fairy tales to the campers, accompanied by Chef dressed in a tutu and playing the harp in order to lull more campers to sleep. Chef's dancing, and the "Dance of the Sugar Plum Fairy" music, makes the campers drowsier. DJ, despite his attempts to stay awake by tying himself to a tree, falls asleep, taking the tree down with him.

Courtney tries to keep moving in place constantly in order to stay awake, but eventually falls asleep as well. The score evens up with four Gophers and Bass awake, then Lindsay and Beth fall asleep.

Due to eating baked beans at the banquet, Owen is seen sleepwalking in the nude falling off a thousand-foot cliff, and swimming upstream with fish, yet is still asleep. Trent and Gwen talk to each other to try and stay awake; a potential relationship starting to bud, as they get to know about each other's interests while trying not to fall asleep.

After fifty-one hours, Gwen, Trent, and Eva notice that Justin has painted his eyelids to look like they're open, so Chris disqualifies him. Eighty-five hours in, Cody has also fallen asleep, and Duncan passes the time by causing a sleeping Harold to wet himself by placing his hand in warm water. Duncan is ecstatic when he realizes the old trick actually works. Noah awakens to discover he is cuddling Cody and kissing his ear, much to his and Cody's horror. Eventually, Chris decided to have the campers that had already fallen asleep leave and take a shower.

Eighty-five hours in, Duncan, Gwen, Heather, Eva, and Trent are the only ones left awake. Chris uses his last resort: reading the history of Canada in pop-up book form.

This is boring enough to put Eva and Heather to sleep immediately, and, soon after, Trent as well, to Gwen's dismay. After the first chapter, it's down to Gwen and Duncan. After a while, Chris decides to give the two a bathroom break. Duncan tries to hold it, but concedes when Gwen challenges him to hold it for another ten chapters of the book. Duncan is later found asleep in the stall and this news is announced mere seconds before Gwen falls asleep. Gwen is declared the official winner of the Awake-A-Thon, giving the Screaming Gophers invincibility, and causing the Killer Bass to have to eliminate someone.

Later that afternoon, Eva is seen throwing things out of her cabin's window, looking for her MP3 player, and accusing her teammates of stealing it. Heather arrives with the MP3 in hand, giving it back to Eva and pretending to have found it nearby the campfire pit.

Eva tries to apologize to her teammates for accusing them but is only frowned upon.

That night, at the campfire ceremony, Chris gives the marshmallows to everyone except Eva, who is eliminated. After screaming at her former teammates and kicking Chris in the shin, Eva boards the Boat of Losers. Afterward, Courtney has a marshmallow toast with her teammates, vowing that her team will not end up in this position again next week.

Owen is seen sleeping in a cave as four Sasquatchanakwas look at him. One of them pokes him with a stick, causing him to fart. The smell causes them to throw Owen out of the cave, where he stays for the night.

Chris is about to wake up the contestants using an air horn.

Eva almost bites Cody when he attempts to touch her MP3 player.

Everyone's still tired after Chris wakes them up.

Owen is exhausted from too much running.

"Yeah, it's called overeating; look into it."

Chris passes Eva, Justin, Bridgette, and Beth on his scooter.

Some of the contestants are finished running.

Owen trying to revive Noah after the 20-kilometer run.

Harold is the last contestant to reach the main lodge, which annoys Courtney.

The feast didn't stand a chance against the campers.

However, the feast was all part of Chris's master plan.

Gwen and Heather, both visibly full, object to any more challenges.

Lindsay and Beth attempt to stay awake by maintaining a headstand.

Heather offers an alliance to Lindsay and Beth.

. . . and plots to use it for her unscrupulous motives.

Bridgette is one of the first to fall asleep by sundown . . .

Tyler has a nightmare involving Katie and Sadie.

Katie and Sadie are attacked by a bear in Tyler's nightmare.

DJ's plan of tying himself to a tree to stay awake doesn't work as well as he thought it would.

Courtney keeps up physical activity in order to stay awake.

Courtney explains her strategy in the confessional — if she keeps moving, she won't fall asleep.

The Screaming Gophers during the Awake-A-Thon challenge.

Owen ditches his clothes once he starts sleepwalking.

Katie and Sadie even fall asleep together.

Duncan plays a prank on Harold.

. . . which causes both of them to panic upon waking.

Chris teases the campers with coffee.

Gwen begs Chris to give her some coffee.

Chris reads a book about the history of Canada.

. . . and then Trent, all before Chris even finishes chapter one.

Duncan ended up falling asleep while using the toilet.

Chris declares Gwen the winner — and by extension the Screaming Gophers.

Courtney says whoever stole Eva's MP3 player should give it back to her now before she destroys the camp.

Katie and Courtney are tired by Eva's anger issues.

Eva is happy that Heather "found" her MP3 player.

Some of the Killer Bass members are angry at Eva.

Eva admits that she overreacted a little.

The Killer Bass at their second elimination ceremony.

Duncan is the first camper to receive a marshmallow.

Katie and Sadie are safe too.

Harold gets the final marshmallow.

Eva leaves the camp, infuriated with her teammates.

On depature, Eva kicks a smiling Chris in the knee.

Owen gets thrown out of a cave.