The Bold and the Booty-ful 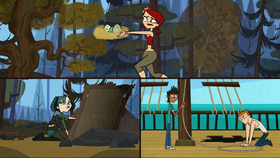 Gwen and Scott
The final four is given the final immunity challenge. Someone discovers the evidence left by a fallen contestant that exposes another's true nature, which leads the hero to feel almost apologetic to a villain. Meanwhile, the malevolent competitor ends up trapping someone in a pile of junk before sabotaging somebody else's chance of winning against his old foe. In the end, one contestant is automatically eliminated due to angering the host, and another is eliminated by the winner's sole vote to try and save her significant other also giving her a final warning for who she's up against, thus allowing two contestants to move on to the finale.

The episode begins with an upset Scott mourning Courtney's elimination. He states he misses having someone to boss him around, and Mal convinces him that it Gwen is to blame for Courtney being gone. Gwen announces in the confessional that she plans on leading an alliance. When she tries recruiting Scott, his previous conversation with Mal causes him to snap at her. Inside Mike's subconscious, he and his first three personalities are almost at the tower when they finally locate Manitoba Smith. Manitoba has been tasked with the least strange job of all the alters - destroying Mike's dreams so he "can never enjoy them again". He selects a cloud displaying one about kissing Zoey, earning a smile from Mike, and a romantic comment from a sighing Svetlana. Mike snaps out of it when Manitoba throws the cloud into the fire. The former attempts to convince him to join them, but the latter points out that, as Mike would just regain control, he himself cannot really benefit. Vito and Chester realize the validity of his argument, and question why they should listen to Mike. Mike counters that he's "the original", and extracts his license to prove it. The image on the card is not his own, but Mal's, shocking Mike and his other personalities.

Zoey is then seen in the Spa Hotel, pondering Alejandro's warning about Mal. Chris bursts into the room, complaining about the quality of the hotel. He complains that the sheets are "only" six hundred thread count, and the soap is made of actual soap. Zoey tricks him into leaving, by saying she needs to use the bathroom. She hits a portrait of Chris and something behind his teeth falls out - the DVD of Mal's misdeeds. She sneaks into the library and plays it, discovering that Mal has been active longer than she previously thought.

Chris makes his usual announcement to meet for the challenge, this time at the Dock of Shame. "Mike" assures Zoey that things are back to normal, and remembers when he gave her a bracelet. However, Zoey fumes in the confessional that Mike actually gave her a necklace, not a bracelet, and calls him a weasel. Chris explains that the contestants must find the treasure they are assigned, and bring it back undamaged. The first person to do that gets invincibility. He goes on to say that the contestant who comes back empty-handed, or finishes last will automatically be eliminated, and the immune contestant will send someone home, effectively causing a double elimination. Zoey is assigned Sasquatchanakwa, "Mike" is assigned a Gilded Chris Award, Scott is assigned a diamond guarded by Fang, and Gwen is supposed to retrieve a painting of Chris from his destroyed "cottage" intact.

Scott is the first to reach his destination when Chris deliberately yells about his arrival over the intercom, so as to bring out Fang. The diamond is in his teeth, much to Scott's anger. The two initiate their normal routine of a "cat and mouse" game, with the shark having the advantage. Meanwhile, Zoey has found Sasquatchanakwa's tracks. She destroys a loudspeaker in order to retain her own safety and climbs into a tree. Gwen is next to reach her location. Initially confident, she retracts her enthusiasm when she sees how burned and scattered with debris the cottage is. "Mike" sneaks up behind her and almost hits her with a pipe, but Gwen becomes aware before his plans can come to fruition. When questioned, he says that despite the statue being long lost, he thought it would be at the cottage because Chris wouldn't lose a statue of himself. They agree to team up even though, as Gwen confirms in the confessional, she has noticed a negative change in Mike. when she warns him about the frailness of the structure, "Mike" smiles evilly and kicks down a post, thus burying her in rubble.

Zoey obtains Sasquatchanakwa's egg breakfast and flees for the finish line. Mal runs into Scott and suggests that they work together to get to the final two. Gwen pulls herself out of the wreckage and grumbles about Mal to then find an intact painting of Chris. She accidentally smudges it and frantically works to restore it, but can't find the perfect shade of brown until she comes across bear feces. Extremely disgusted but satisfied with the color, she uses it for the painting. Mal sabotages a trap he and Scott made to capture Fang and traps Scott instead, before watching Fang beat him up. Zoey tries to surrender the eggs, but the branch she and Sasquatchanakwa are both on breaks. Upon landing, Zoey shatters the eggs as both begin rolling down the hill. They land by Chris, who announces that Zoey wins the challenge. Mal drags Scott over and argues that while he didn't find the Gilded Chris, he did bring back one of the host's favorite things: an injured contestant. Chris is pleased and doesn't take the issue any further. Gwen's efforts result in her arriving last, though, unlike the males, with something to actually present for judgment. Chris notes that doesn't recognize it, recoiling at the smell. Gwen reluctantly admits she used bear poop for paint and Chris pukes on the portrait. For "defacing" the painting, he eliminates Gwen from the competition.

Inside Mike's head, Mike is still in disbelief over Mal apparently being the original personality. Chester asking why he's been listening to him triggers Svetlana to raise morale in Mike's defense. She states that even though he may not be the first, he is the best. As Mike thanks her, Manitoba reminds him that they're inside a "jail" Mal created. Mike realizes that the wallet is really just a piece of brain and that he is indeed the original. He molds the brain into a key and frees Manitoba. Mike grudgingly agrees to carry Chester for the rest of the trip while everyone else runs ahead. Gwen wishes Zoey good luck in the competition and the latter says that she hopes they're on the same team next time. Gwen angrily adds that she never wants to return right before being flushed. Chris then instructs Zoey to choose who is eliminated. She elects to send Scott home for reasons of a past agreement, as well as fear about terminating Mike before he may regain control. Scott warns Zoey that she picked the wrong person to take with her, but she assures him that she knows what she's up against. Chris pushes Scott into the toilet and flushes him before signing off.

Gwen and Scott manage to swim to the surface and are relieved that they are still alive. After Gwen starts to believe that everything is fine, they realize that they are at Niagara Falls. As they fall off the waterfall, Gwen angrily yells about her hatred for Chris.

Sasquatchanakwa uses the Flush of Shame as a literal toilet.

Mal convinces Scott that Gwen is the reason Courtney's gone.

Gwen is excited to be the last of the original cast in the competition.

Scott yells at Gwen for something she didn't commit.

Mike and his personalities head for the tower.

Mike and his personalities find Manitoba.

Mike enjoys his romantic dream about him kissing Zoey in the rain...

... until Manitoba burns it.

Zoey discovers the truth about Mal.

Chris arrives in his pirate outfit.

Zoey is electrocuted when she touches her chest.

Scott is hit by a boxing glove when he opens his chest.

Mal opens his chest, which contains a turtle.

Scott looks for the diamond.

Fang reveals that the treasure in his teeth.

Gwen finds a picture of Chris.

Mal accidentally gets whacked in the face by Gwen.

Gwen is suspicious of Mal.

... and buries Gwen in rubble.

Mal and Scott agree to team up.

Gwen finds another painting of Chris...

... but accidentally smudges it with her hands.

Scott and Mike set a trap for Fang, but it fails.

I'm not done with you yet!

Fang prepares to beat up Scott.

Gwen is forced to use bear droppings to restore her painting.

An exhausted Gwen returns with her painting.

Disgusted, Chris vomits and disqualifies Gwen from the competition.

Mike is shocked about Mal being the original personality.

The ID turns out to be fake.

Mike shapes it into a key and saves Manitoba Smith.

Zoey tells Gwen she hopes they are on the same teams next time they compete.

Gwen exclaims that she will never return to Total Drama, before she is flushed.

Zoey chooses to eliminate Scott, leaving her to deal with Mal.

"Mike" and Zoey are the final two.

Retrieved from "https://totaldrama.fandom.com/wiki/The_Bold_and_the_Booty-ful?oldid=1582789"
Community content is available under CC-BY-SA unless otherwise noted.