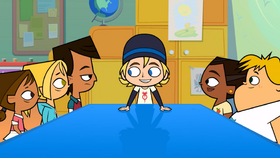 The kids are craving for pizza, but their teacher is suffering from a broken heart and will only serve them pizza if he is happy again. Using love letters, the kids create a secret admirer for him in order to mend his broken heart. Just when things are going according to plan, an unpredictable kid ruins it by setting up a date between the teacher and the secret admirer. The kids attempt to fix this by getting two of them to be their teacher's date, but the plan fails and everyone will be having vegetables for a long time.

It is another peaceful morning at the daycare, only for the tranquility to be disrupted by sudden tremors. The source is a hungry Owen craving for pizza. In fact, he craves pizza so much that he drools until a puddle of his saliva forms. The kids are normally served pizza for lunch at least twice a week, but lately Chef hasn't been serving them. Leshawna explains that Chef only serves pizza if he is in a good mood, but for the past two weeks, he isn't and serves them only vegetables. Duncan knows the reason why; two weeks ago while trying to escape from the daycare, he witnessed Chef literally being dumped by his girlfriend.

Bridgette pities Chef and hopes that he can find a new love soon so that he can be happy again. However the other kids can't wait that long and propose to create a secret admirer for him. Everyone aside from Bridgette agrees with the plan. The kids set their plan into motion; Leshawna writes a love poem and has Duncan leave it by Chef's office door. When Chef reads the poem, he instantly falls in love and his mood raises. Just as the kids had hoped, Chef celebrates by serving them pizza.

For the next few days, Chef receives love letters and gifts from his secret admirer while continuing to serve pizza to the kids. One day however, Chef announces that his admirer, Lafawnduh, is coming to the daycare for a date. This confuses the kids as not only is Lafawnduh fake, but none of them wrote such a thing. It turns out Izzy is the one who set up the date, much to Leshawna's anger. After calming down, Leshawna thinks of a new plan to solve this; one of them will have to wear a wig and stand on another kid to pose as Chef's date to meet up with him. They will then write a note telling him that Lafawnduh has runaway to join a Russian Circus that performs at space stations before creating another secret admirer.

Jude is chosen to be the 'head' of Chef's date while standing on top of Owen's shoulders. Though Jude complains at first, he complies when the girls (sans Gwen) compliment on how pretty he is. The plan is put into motion and Chef comes in to see Lafawnduh. Duncan bets Noah five candy bars that Chef will not fall for the disguise, but loses as Chef does indeed fall for it. For their date, Chef set up a picnic by the playground with cookies. Wanting to keep the date short, Lafawnduh decides to take her leave, but Chef wants to give her a goodbye kiss first. Jude gets nervous at the last minute and jumps out of the trench coat, leaving Owen behind. Realizing that he has been tricked, Chef angrily gives timeouts for everyone. As punishment, the kids are served vegetable for lunch. Jude and Owen suffer the worse and have to sit at the naughty corner for a long time eating blended vegetable puree.

In a version of Pac-Man, Owen is going through eating pizza and sandwiches, while avoiding vegetables. Soon, Chef begins chasing him down.

The sounds of Owen's belly causes Noah to ruin his painting..

..and Gwen and Leshawna to ruin their creation.

Owen's belly is hungry for some pizza.

Owen talks about how much he wants to eat pizza.

Jude wants to help out Owen.

Jude and Owen sing a song about Pizza.

Gwen wants to help out Owen..

.. but accidentally trips over his drool..

.. and runs away in disgust.

Leshawna mentions that Chef only orders pizza when he's in a good mood.

Duncan tells the kids why Chef is in a bad mood.

Candice breaks up with Chef.

Chef cries over Candice breaking up with him.

Bridgette thinks that if Chef finds a new girlfriend he will be in a better mood.

Jude comes up with a plan as to how they can get pizza.

Owen's and Leshawna's reaction when they hear Jude's plan.

Bridgette thinks it's mean to mess with someone's personal life.

Jude imagines Bridgette as a angel..

Jude imagines Owen as a pizza.

Jude tells the kids his plan.

.. which makes Leshawna want to help the kids.

Leshawna comes up with a plan as to how they can get more pizza.

"Roses are red, violets are blue, sugar is sweet and so are you!"
- Leshawna

Leshawna hands over the love letter to Duncan.

Duncan puts down the love letter right next to Chef's door.

Chef reads the love letter made by Leshawna.

Chef tells the kids that he now has a new secret admirer.

The kids get happy when Chef tells them he'll order pizza.

The kids give more love letters to Chef.

The kids' reaction to getting more pizza.

Chef after he read a lot of love letters.

Chef tells the kids that his secret admirer will come over to him at 3..

.. which shocks the kids.

The kids find out Izzy created a love poem where La Fonda wants to meet Chef..

Leshawna tells her plan to the kids.

Owen calls Jude the prettiest kid of the daycare.

Leshawna tells Chef that his secret admirer is here.

Noah gets 5 candy bars from Duncan.

Chef asks "La Fonda" if she wants any cookies.

.. and burps after he ate them all.

Leshawna tells Jude to hurry up and get out of there.

"La Fonda" tells Chef that she has to go.

Chef asks "La Fonda" if he can kiss her.

Jude's reaction when he sees Chef wanting to kiss him.

"Well this just got weird!"
- Duncan

Izzy is happy that her plan succeeded.

Jude tells Owen that Chef wants to kiss him.

Jude jumps off of Owen.

Chef finds out La Fonda was just Owen and Jude all along..

.. which makes him very angry.

"TIME OUT FOR EVERYONE!"
- Chef

Chef makes vegetables for the kids.

Bridgette asks Leshawna where are Jude and Owen.

Jude and Owen in the naughty corner.

Chef tells Owen and Jude that they have to eat blended vegetable puree.

Retrieved from "https://totaldrama.fandom.com/wiki/The_Date?oldid=1589518"
Community content is available under CC-BY-SA unless otherwise noted.