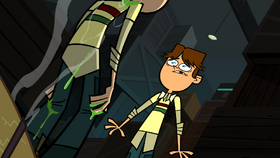 Tyler
After breaking up with an unfaithful partner, a jealous contestant is persuaded to seek revenge by flirting with someone else. The two teams must search Area 51 for intact alien artifacts and bring them back to the Total Drama Jumbo Jet. During the challenge, two contestants have their second kiss, thus officially starting a relationship, while an alliance becomes strained. In the end, one team wins while the opposing someone is betrayed and gets sent home.

This episode opens to the first class compartment, where there is definite tension among Team Amazon. Courtney and Sierra are planning on eliminating Gwen from their team the next time they lose a challenge. The reasons are as follows: for Courtney, Gwen's kiss with Duncan in the confessional (which resulted in her breaking up with Duncan by throwing food at him and kicking him in the groin); for Sierra, Gwen getting together with Courtney's boyfriend, as she believes boyfriend stealing is wrong. The only person having fun with all of this drama is Heather, who is just glad that the target is finally off her back, and thanks Gwen for becoming the new one in the confessional. In economy class, Team Chris Is Really Really Really Really Hot is planning their own next elimination, with Tyler and Alejandro hoping to eliminate Duncan.

The camera then shows Ezekiel and Chef's inflatable dummy sitting in the cockpit while the plane is on auto-pilot. Suddenly, two UFOs appear and shoot strange electricity beams at the plane, which causes it to waver in its flight. Chris calls the "potential crash victims" to visit the culinary for a "last meal" while their autopilot tests some of the equipment. Alejandro takes advantage of the turbulence to suggest that Courtney flirt with Tyler to make Duncan jealous and Courtney does so, mentioning that Tyler is "super-cute". This surprises Tyler, but he refuses to cheat on Lindsay, saying he could never do that to her.

Both teams go off looking for intact relics. Heather is angry to discover that Courtney is purposely throwing the challenge in hopes of eliminating Gwen, while Tyler forces Team Chris to help him look for Owen, who may be having his memory erased. Alejandro angrily claims that an artifact won't fall from the sky, but Tyler causes a small box to fall into Alejandro's arms, releasing a pair of aliens that electrocute the both of them. Duncan and Gwen run into each other in the warehouse and Gwen mentions although everyone on her team now hates her, she enjoyed their kiss. However, she points out that Courtney's "ridiculous" flirting seems to be getting to Duncan, but before she can go on, Duncan kisses her, popping his foot up in the process. Gwen asks if Duncan kissed her just to shut her up, and Duncan says that is not entirely the reason. The two smile and decide to start a relationship and just let things happen. They are interrupted by an alien spaceship, reminding them they are competing against each other. Duncan runs off to capture the alien, and Gwen trips him. She tells him to try not to get eliminated, and Duncan replies with, "same to you", with a dreamy expression.

Cody is shown to be searching alone. However, when he finds an alien pod, an alien Cody is created as a result. Sierra is enthusiastic and hugs both so tight, the alien Cody explodes, covering Sierra and Cody in slime. Duncan finds Team Chris Is Really Really Really Really Hot and rescues them, but makes Alejandro promises not to vote him off in return - he fails to free Alejandro, but they both end up unintentionally freeing Owen, who claims to have no memory, despite clearly showing he remembers everyone and the competition. Chris and Chef Hatchet, watching from the plane, thank the Colonel for doing Owen's make-up job and mullet hairdo, while Duncan finally gets the aliens off Tyler and Alejandro and traps one into a cardboard box, confident.

Gwen brings Team Amazon the original box Team Chris Is Really Really Really Really Hot had found, which Courtney and Sierra object to. However, Heather tells them to "save it for first class" as they run out of the warehouse. Tyler, on the other hand, is too busy gloating to notice that Team Chris Is Really Really Really Really Hot is now on a mine field. Tyler is blown up and launched into the air, landing by Chris with the charred remains of the alien. When he lands, Tyler can only see hallucinations. Chris announces that the specimen is not alive. Team Amazon almost loses their box because Courtney trips Gwen, but Chris catches it and they win the challenge. In first class, Heather is surprised at Courtney's obsession with eliminating Gwen, noting that Courtney has replaced Izzy in terms of insanity. In the meantime, Gwen disappears to spy on the elimination ceremony, where Chris is explaining how Team Chris Is Really Really Really Really Hot failed due to their lack of teamwork. Tyler, now bandaged up due to his injuries from the mine explosion, is ecstatic due to thinking that Duncan is out, remembering his earlier discussion with Alejandro, only to discover that he's been voted off instead. Courtney protests at first, but when Tyler asks if there can be a re-vote, she angrily knocks a severely injured Tyler out of the plane. Courtney says she will have her revenge on Duncan and Gwen next. Since she said the key word "revenge", Owen is hypnotized and starts dancing again. Chris signs off the show while wondering whether or not Courtney will ever get her revenge on Gwen and Duncan.

Tyler is seen taking the Drop of Shame, saying, that he's sad about his elimination, though he becomes happy and says that this was his best season. He looks at the camera and tells Lindsay he is coming to see her, also asking whether she remembers him this time. After that, an alien is coming towards him. Tyler then says that it can't beat him alone. Though, a whole team of aliens appear and Tyler says that now, they can beat him. The camera zooms out, and he is then seen being zapped by the aliens in the sky.

Sierra cuts out a paper Gwen...

...and then bites its head off.

Tyler about to eat a banana.

Courtney laughs at Duncan's pain while embracing an uncomfortable Tyler.

Team Chris gets a better view of the warehouse behind a rock.

A bunny passing by gets zapped by a laser.

A lizard latches onto Heather's leg.

Gwen realizes and informs her team that they are on a minefield.

Duncan's plan of throwing a rock and running in the other direction doesn't end well for Tyler.

Owen gets trapped in a tube.

Tyler climbs up an electrical fence, unaware that there is a door to the right.

Team Amazon has to choose between singing or tap dancing in the mine field.

Heather and Courtney during Boyfriend Kisser.

Team Amazon escaping the mine field as Cody sacrifices his candy to enable this events occurance.

Gwen thanks Cody for helping them find a way out of the mine field.

Tyler vents his worry over Owen's safety to Courtney...

...so she consoles and asks him to go somewhere quiet to talk about it...

...but it isn't genuine as she wants to make Duncan jealous.

Courtney hesitates at the idea of saving Heather's life...

...but decides to save her for her vote.

Owen is captured by the government.

Tyler and the alien touch fingers...

Duncan and Gwen converse after bumping into each other.

Duncan and Gwen agree to let their relationship play out without any pressure.

An alien clone version of Cody hatches from a pod.

...hugging both it and the real Cody excitedly.

Cody and Sierra are covered in alien slime after the clone explodes.

Alejandro is annoyed by Tyler's attempts to save Owen.

Alejandro tries to persuade Tyler to leave Owen behind.

Tyler knocks an alien artifact off the roof.

Alejandro is satisfied with his find.

Duncan helps to get the alien off Alejandro.

The alien shocks Alejandro and Duncan.

Duncan and Alejandro have to carry Owen after he faints.

While Tyler expresses hope that his team will win, he sets off a mine...

...sending him flying through the air.

"Why is the purple meatball playing the piano?"

The alien artifact gets destroyed and Chris declares it's not enough...

As she and her team run back to Chris, Gwen notices that the other team has already made it.

Gwen ends up falling and losing the box...

...via Courtney who "accidentally" tripped her...

...however, Chris still ends up catching the box and declares Team Amazon the winners.

Everyone on Team Amazon (except Courtney) cheers when they win.

Heather tries to strategize with Courtney, telling her to focus on the boys instead of Gwen, though she isn't listening.

Gwen feels guilty after she looks at Courtney.

"Izzy, you have been replaced."

Gwen listens to Chris announcing that the elimination ceremony is about to take place.

Team Chris at their third elimination ceremony in a row.

Tyler is seen excited that Duncan is out..

...but it's revealed that he is eliminated.

Gwen hides from an angry Courtney.

Tyler gets kicked out of the plane...

Courtney swears she will get her revenge, on two people specifically.

Alejandro and Duncan, both not intimidated by Courtney's threat.

Owen starts to sing and dance again after Courtney says "revenge", while Chris signs off the episode. 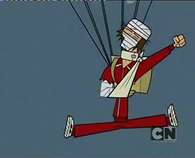 "This was my best season yet! Woohoo!" 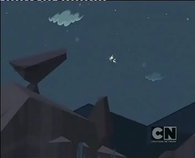 Tyler zapped by the aliens.

Retrieved from "https://totaldrama.fandom.com/wiki/The_EX-Files?oldid=1621754"
Community content is available under CC-BY-SA unless otherwise noted.