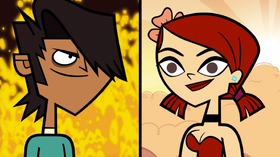 Zoey (Canada, USA, USA (iTunes), New Zealand, Hungary, Poland, Romania, Turkey, and The Netherlands)
Mike (USA (Netflix), UK, Australia, Croatia, France, Israel, Italy, Russia, Latin America, Philippines, Brazil, Denmark, and Norway)
The final two face each other with some added assistance on a moat climb to the million. Someone finally gives her all to take down her enemy, but with some well-deserved help, the enemy is disposed of, and a relationship is saved. The sadistic host tries to make things interesting by making the contest a free-for-all, where anyone in the game can win the prize, though one of the two original finalists ultimately emerges as the champion. In the end, a host is well-rewarded, even though a long-time home meets a cataclysmic end.

The episode begins with Zoey in the monitor room, watching clips revealing Mike to have been Mal for longer than she thought. In the confessional, she expresses her concern, but believes "that doesn't mean Mike's not in there." Mal, in the confessional, laughs at Zoey's devotion in taking him to the finale despite him still being Mal. Meanwhile, in his subconscious, Mike and his four alternate personalities arrive at the door of the tower, questioning its lack of surveillance. Mike argues that since there is a picture of five people on the door and there are five of them, it must be the right way. But as he pulls on the handle, the door falls on top of everyone. Using their combined strength, they can push it off and enter the tower but are met with a dauntingly long, spiralling staircase to reach the top.

Everywhere on the island, water starts to burst out; the Flush of Shame, the confessional, the mines, the cabins, and the main lodge until the entire island completely sink. As Alejandro tries to console Heather, who is disappointed for losing a chance to get the million dollars again, Fang appears and started chasing the couple. Meanwhile, Mike, floating on a roof with his friends, tells them that they "should do this again sometime," to which everyone responds "No!" Floating off on what's left of the outhouse confession with the million dollar case, Chris bids farewell to the viewers and tell them to tune in for the next season which will feature new contestants and a new island, since this season is such a success. Before the episode ends, the Boat of Losers, filled with the animals of the island, sails off with Owen water-skiing behind it before falling into the water, only to resurface, laugh, and proclaim "That, was Awesome!"

In both endings, Zoey hides behind a rock to avoid the shots, while Mike uses Svetlana's skills again to jump and avoid them. After Chris mocks Chef for his shooting skills, Zoey tells Chris not to be too hard on Chef. Chef thanks her and proceeds to try to hit Zoey. Her distraction gives Mike the chance to arrive first to the rock, pull out the sword, and win Total Drama All-Stars. Mike cheers happily, and Zoey claps, proud of him. Cameron and Gwen also congratulate him on his victory.

In both endings, Zoey hides behind a rock to avoid the shots, but Mike uses Svetlana's skills again to jump and avoid them. After Chris mocks Chef's shooting skills, Mike becomes cocky towards Chef and agrees with Chris, which causes Chef to become focused on him. This buys Zoey enough time to pull the sword from the rock and win, while Mike, Cameron, and Gwen congratulate her on her victory.

As Zoey paddles, Mike ponders on whether or not he'll miss having his alternate personalities. It's also shown that the respective finalist kept their grand prize. Near the floating cabin, Fang is seen still chasing Alejandro and Heather.

Chef accidentally drops the prize money out of the case.

Zoey watches more of the DVD of Mal.

Zoey claims Mike has been Mal for longer than she thought.

Mike about to open the door.

Mike and his personalities push the door that fell on top of them.

Mike and his personalities manage to get inside the tower.

Mal tells Zoey that Mike is never coming back.

Chris congrats Mal and Zoey for making it to the finale.

Zoey and Mal before the challenge starts.

Mal has more difficulty in shooting than Zoey.

Alejandro, Cameron, Gwen, and Heather fall out of their balloons.

Everyone's reactions to the Moats of Doom.

The "Moats of Doom".

Zoey is saddened that Mike may be gone forever.

Zoey buries the necklace Mike gave to her in Grand Chef Auto.

Mal attempts to throw Heather to the Toxic River.

An annoyed Chris drops his phone into the toxic waste.

... but fails and Mal tosses her on top of Cameron.

Mal uses a pogo-stick to cross the moat...

Alejandro and Heather refuse to help Gwen since they're on different teams.

Mike and his personalities defeat Mal by pressing the reset button.

Mal and Mike face-off for the final time.

Heather and Alejandro making out.

Gwen kisses Cameron on the cheek.

Mike and Zoey after their first kiss.

Heather and Alejandro fighting for the million dollars.

...and jumps off the screen.

Fang chases after Alejandro due to the latter having his tooth.

Gwen bonks Heather on the head with her pole.

Gwen says she had been waiting for four seasons to do that.

Mike and Zoey continue with the challenge.

Chef Hatchet shoots Chris down with a meatball bazooka after Chris berates his shooting skills.

A squirrel holding up a sign showing the world being destroyed.

Camp Wawanakwa sinks into the ocean.

Alejandro and Heather swim away from Fang...

...and the shark chases after them.

Mike suggests playing the game again sometimes, which the others are not too thrilled to hear.

All of the animals escaping in the Boat of Losers.

Owen water-skiing behind the Boat of Losers, concluding the episode (and the season).

Retrieved from "https://totaldrama.fandom.com/wiki/The_Final_Wreck-ening?oldid=1636279"
Community content is available under CC-BY-SA unless otherwise noted.