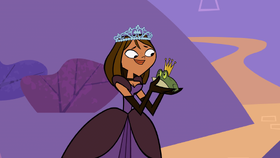 Justin
Fairytales come to the set of the show as a princess is crowned, causing two knights to form a fierce rivalry over love. Despite fighting his way through dragons and ogres, one knight finally meets his ultimate end in the game and gets his long waited comeuppance after the princess refuses to return his love.

The episode begins with Duncan hosting a burrito making contest. Courtney is sitting at the other table, saying she is "too busy 'strategizing' to win the competition" to participate in the contest. Beth and Lindsay combine their burritos using a friendship bracelet, giving it the name of BFF; "Burrito Friends Forever", while Harold makes one called the Luscious Leshawna, which is crudely modeled after the recently departed Leshawna. Justin makes a burrito modeled after his muscles to impress Beth and Lindsay, but they feel no sense of attraction, which worries him about his control over them. Despite being disgusted, Duncan picks Harold's burrito to be the winner, as it is the biggest, which was the original objective. Harold does not notice the shady remark towards Leshawna's weight. When Justin demands another opinion, Courtney says that all of them show signs of "Reality Show-itis", which apparently causes them to turn everyday tasks into challenges. Justin goes over to Courtney, compliments her strategy, then asks her how she gets through life with all of her "deformities". When she says she doesn't have any, he assumes that her answer is denial.

Chef and Chris walk in to announce the challenge. Beth correctly guesses the challenge based on fairy tale movies due to the glass boot Chris is carrying before they announce it, which results in Chris threatening to personally kick Beth off the show. Chris says that the first female castmate who fits into the glass boot will be the challenge's princess, but he immediately rules Beth out, saying that only the winners from the last challenge can participate, which makes Beth bitter. Lindsay takes off her boot and reveals that she has big feet (which are never actually seen, but the boot can only just fit over her big toe). Then Courtney tries to put on the boot. Chris says that he can find a different way of selecting the princess, but Courtney manages to get the boot on her foot. Chef then dubs Courtney as "Princess Courtney." Courtney's glass boot then suddenly shoots off her foot, hitting Justin in his eye.

As Chris tells a story, the first challenge begins: Crossing a bridge with an "Terrible Toothless Troll". Everybody is given a fairytale role, complete with accessories that covers their eyes for their costumes. It becomes apparent that they'll be crossing the bridge blindfolded. Beth and Lindsay fail, but Harold is able to run past Chef. Justin is reminded of "W.W.C.D." ("What Would Courtney Do?") and uses his headgear to headbutt Chef and get across the bridge. Duncan is able to use Chef's Rapunzel wig as a rope vine to get across, even though he cheats by moving the blindfold around to see. Even though Justin notices that Duncan can see, Chris doesn't see that he cheated. Beth and Lindsay get injured from falling off of the bridge after they fail to get across it, so they sit near Chris to watch and listen to the story.

The next part of the challenge begins as Courtney is leveled down, dressed like a princess. She begins singing a song called "My Prince Will Be", which enthralls both Duncan and Justin. Justin realizes that he finds Courtney attractive and points out that he and Courtney would be "the best looking couple in the kingdom". Duncan hears this, and the two get into an argument about who should be with Courtney in the final challenge. During Courtney's song, the boys try to prove to her that they are the best for her, and at the same time, Chris advertises a CD of Courtney's song, telling the audience to buy it now before everyone else downloads it illegally. Harold gets one so he can think of Leshawna while listening to it, but then he gets a letter saying she'll kill him if he does that.

After the song, Justin compliments Courtney's brain and beauty. Duncan just thinks he is sucking up, but Courtney points out that it is nice to get compliments for once. She then throws her glass slipper at Justin (which accidentally hits him in the face), explaining that she has chosen him to receive an advantage in the second challenge. Chef "kidnaps" Courtney, and takes her up the water tower (designed to look like a medieval castle tower). The three boys are given wooden swords (Justin gets the biggest one for his advantage), and are told to use them to slay a dragon (the mechanical monster with wings taped on), and then climb the tower to rescue Princess Courtney. Justin calls a truce with Harold to get Duncan to lose, but later betrays Harold (claiming he would have done the same if the princess was Leshawna), and leaves Duncan crushed by the dragon as he makes his way up. Right before Justin and Courtney kiss, Chris informs them that the challenge isn't over; the two must now duel with their swords, with the winner gaining invincibility. Out of chivalry, Justin refuses to battle. Courtney, however, doesn't want to risk losing invincibility and knocks him off the tower, causing him to crash into the ground (placing him in a full body cast). Chris also advertises Princess Courtney dolls which are "more fun and less dangerous than playing with the real Courtney".

At the award ceremony, Chris gives Courtney her Gilded Chris before announcing that her lawyers want 80% of the profits from the Princess Courtney merchandise. In an attempt to avoid this, he changes all the dolls to Princess Beth dolls (and gives her a contract that she gets no profits off the merchandise), because she's the only other brunette girl, much to Beth's happiness. He then gives Beth her Gilded Chris Award along with the contract. Lindsay and Harold receive Gilded Chris awards too, meaning it comes down to Justin and Duncan in the bottom two. Chris announces that the final Gilded Chris goes to Justin, and Duncan is out of the competition. Courtney is taken aback and loudly voices her protest, but Chris confesses the truth, saying he was only joking; Duncan is, in fact, safe, while Justin has been voted off. Justin bids everyone farewell, but to his surprise, none of them are sad to see him go, not even Courtney who barely acknowledges him. Courtney explains in the confessional that she had the whole thing set up to work out in her favor. She never had any feelings for Justin and only flirted with him so that he'd give up his immunity in the late stages of the game. Justin then carefully makes his way to the Lame-o-sine with his injured body saying this show has got a lot less handsome. Chris and Chef then end the episode playing with dolls, and Chef has a war with the princess Beth dolls. Then Chris mentions that the target audience might be too old to play with dolls, but then demonstrates to Chef how to "properly" play with dolls.

Still injured and holding Courtney's glass boot, Justin continues to dream of Courtney, believing that if he stops focusing on his looks and becomes smarter instead, she will fall for him. However, Justin states that modeling pays, and despite his severe injuries, his agent is still capable enough to get him to be in several leg modeling contracts and celebrity children's birthday parties. Justin then throws the boot out of the lame-o-sine and says "love smug".

Lindsay and Beth seem to appreciate the burrito Harold has made.

Justin's burrito is simply him folding it to resemble him flexing his muscles.

Courtney tells the remaining castmates that they are all "infected" with "reality show-itis".

"Like, how do you even get through life with all your deformities?"

"I feel like I'm trying to jam a T-Rex into a smart car, and make him buckle up."
- Chris

..but it isn't the right size.

Justin gets hit by the glass boot after it flies off of Courtney's foot.

Justin gets his makeup retouched after he gets hit with the glass boot.

"It's story time, with Uncle Chris."

Justin as the Frog Prince and Beth as the Ugly Stepsister.

Harold as a dwarf and Lindsay as Sleeping Beauty.

Beth, dressed as the "ugly stepsister", falls off the bridge.

Justin runs into a wooden post used to support the bridge.

Lindsay tries to prove that her feet are not big, only to fall off the bridge in the process.

Duncan competes in the challenge with one eye open.

The final three castmates in the challenge.

..along with a CD consisting of Courtney's song.

Courtney expresses her ideas of a "Perfect Prince" through song.

Duncan and Justin admire Courtney while she is singing.

Duncan threatens Justin when he expresses his desire to date Courtney.

Lindsay and Beth are both jealous that Courtney gets to be the princess.

Harold sings along to Courtney's song in the confessional.

Courtney is grossed out after kissing the frog...

...and unknowingly tosses it into Justin's face.

Courtney believes that Duncan could spare a compliment once in a while.

Duncan waits for Courtney to compliment him for all that he has gone through.

Courtney roots for Justin to win the challenge.

This does not go over well with Duncan who attempts to compliment Courtney.

Justin is yet again, hit by the boot.

...only for Justin to steal Courtney's kiss to Duncan as well.

Duncan, Justin, and Harold get ready to fight for Courtney.

Harold calculates the time it would take for Duncan and Justin to reach Courtney.

Duncan and Justin having a sword fight.

Justin persuades Harold to help him.

Justin defeats the dragon and betrays his deal with Harold in the process.

Justin and Courtney on the tower.

Justin's jaw smashes into a prop-castle.

Justin lands on the ground after Courtney pushes him off.

Courtney gets a Gilded Chris Award.

Beth and Lindsay have fun with a Courtney voodoo doll.

Beth celebrates after Chris renames the dolls after her...

..before realizing that it's a voodoo doll.

Duncan is confident about his chances of staying in.

Duncan is amused that Courtney felt that his so-called elimination was an "outrage".

Beth and Lindsay play with the Princess Beth dolls.

Harold is one of only two cast mates to give Justin a farewell.

Justin hits the door on his way out.

Chef Hatchet plays with the dolls.

Chris plays with the Princess Beth dolls as he signs off the episode.

Retrieved from "https://totaldrama.fandom.com/wiki/The_Princess_Pride?oldid=1644246"
Community content is available under CC-BY-SA unless otherwise noted.