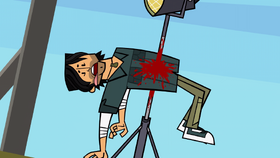 DJ
The castmates compete in a horror-themed challenge. One castmate takes the leadership role of her team, and someone else's conscience begins to bother them due to their suspicious actions. This leads to them to quit from the competition, even though their team won the challenge, saving two others from potential elimination.

The episode opens with the castmates relaxing and enjoying not having to compete in any kind of challenge. Some of them are playing "Go Fish," and eating some stolen sandwiches. Duncan and Justin are kicking a soccer ball back and forth, with DJ being asleep between the two, blissfully unaware of the game. During the game of "Go Fish," Izzy demonstrates her skills in card shuffling, annoying Harold.

All of the cast members are surprised that the sandwiches are so delicious. Beth tries to perform a trick that she calls the "egg salad firework," and when she throws the sandwiches in the air, Owen steals them.

While DJ is dreaming, his dream flashes back to the night before, where he was preparing the sandwiches for the team. Chef appears, reminding him that they both are part of the alliance to make DJ a man and the winner, and Chef is to take half of the million. Back with the castmates, Lindsay and Beth fantasize about having a girls' free day if there is no challenge, but Heather interrupts them by reminding them that they're here to compete, and the quicker she can get rid of everyone else, the better.

The castmates are called over to the fake mountain by Chris, so he can reveal the next challenge. Once they arrive there, Chris's screams are heard before he falls out of the sky, and is impaled on a spotlight. He appears to be dead, before it's revealed to be a stunt prop. The real Chris shows up and announces that the challenge's theme is horror films. After everyone screams about Chris's stunt, Lindsay notes that Beth didn't scream like the others. Beth tells her that she cannot scream due to a faulty tonsillectomy from one of the doctor's earrings getting stuck on her tonsils. Back at the challenge, each team has to select a "scarer" from their team to scare the members of their team, with the rate of the scream being shown on the scream-o-meter. The Screaming Gaffers all agree to choose Duncan for it because he did great in the acting challenges before, and he would make a great scarer due to his personality alone, but Chef forces them to go with DJ as the scarer.

Meanwhile, the Killer Grips argue with each other over who should be the killer. Justin wants to be the killer because the mask would protect his face from damage, whereas Izzy wants to be the killer because she claims that her 'scary faces' even creep her dog out. However, Owen disagrees and continues to claim that Izzy is cute, which annoys her. While Lindsay tries to get everyone to go with Beth because she can't scream, Beth is distracted by Justin and the mask. Owen then rambles about how Izzy is cute and never scary, prompting Izzy to glare at Owen. While no one answers Lindsay, she finally shouts that Beth would be the killer and this is final.

The challenge begins with both Harold and Justin standing in the forest setting, and both DJ and Beth set to scare them. Beth tries to scare Justin, but as he doesn't want his pipes to be strained, he does not try very hard to scream. DJ is pushed by Chef, and he bumps into Harold and puts on his mask, making Harold scream. Harold's screams were the loudest, which causes the Screaming Gaffers to win the first round.

The next round involves scaring one of the teammates in the outhouse. The victims are Leshawna and Lindsay. Leshawna thinks that being scared in the outhouse is the most inappropriate thing ever, and Lindsay states that she is not going to pee on camera as she did last season. When DJ goes in to scare Leshawna, he realizes that she is sitting on the toilet and is immediately embarrassed, apologizing to her for intruding. She angrily tells him to do the scene and scare her, and so he growls softly and claws at her with his hand, which causes her to laugh at DJ's feeble attempt, as the entire outhouse shakes. However, when Beth runs into Lindsay's stall, she scares her so much that she pees herself and screams twice. Beth then tells Lindsay that it was her and she stops screaming. Beth and Lindsay score a point for their team.

The tie-breaking round is the couples round, in which both "killers" go after the couple, who are making out. The couples are Owen and Izzy, as well as Duncan and Heather. Owen and Izzy are excited about the scene, and start making out in front of Chris, but Duncan and Heather are horribly disgusted. Once Chris mentions the incentive of a million dollars, they hesitantly and briefly kiss and recoil almost immediately, both visibly shaken, with Heather commenting on how Duncan "tastes like street," and that she may never recover. When both "killers" try to scare the two couples, neither couples are scared because Duncan and Heather are still grossed out by the kiss, and Owen and Izzy are too busy making out to be scared. Chef then comes out with a mask and chainsaw and scares Duncan, Heather, and DJ. This stunt scares DJ so much that he passes out. After a show break, everyone is surrounding the shocked DJ to see if he is still alive.

In DJ's dream, he is in the clouds and sees his mother. He runs to her, but she gives him a disapproved look and tells him she didn't raise a cheater, before she slaps him. He returns back to consciousness on the where he is being slapped by Heather, who is trying to bring him out of the shock. He requests to speak to Chef, but Chef is talking with the producers, getting disciplined for messing with the challenge. Chris then sets them up for another challenge, in which the Killer Grips' challenge is to stay in the craft services tent and try not to get scared for the rest of the night. Afterward, Chris tells them a fake story about an old movie lot guard who mysteriously disappeared. They are given devices to detect where the ghost of the guard is. Chris then comes out of a tent and informs the Screaming Gaffers of their challenge: scare the Grips out of the tent using any items available. Before the night ends, Harold tries to scare them with a floating object trick, but it doesn't work.

Duncan makes some fake blood and rigs it to seep from the windows of the kitchen. The Killer Grips are terrified of the blood and attempt to leave the tent until Lindsay points out that it smells like ketchup. She forces Owen to taste it, proving it is ketchup, allowing them to stay in the tent.

During that time, everyone on the Killer Grips notes that Lindsay was being a bit bossy. Meanwhile, the Gaffers try to think of something else to scare the Grips, and everyone turns to DJ, for he hasn't been helping out with the other tricks. DJ claims that he doesn't want to scare the Grips, as his Momma doesn't like him scaring people, but the Gaffers force him to cooperate. DJ's plan was to scare the Grips with the ghost of the guard. Heather dresses up as the guard, and added with some spooky voices (provided by Leshawna), complete darkness (Duncan turns off the power) and Harold suspending Heather above the Grips, scares everyone (except Lindsay) out of the tent. Lindsay tries to tell everyone that the ghost detecting devices were still not going off and therefore it was just a prank, until DJ throws a fork that sets off the device and sends Lindsay screaming into the night. Once the Killer Grips were gone, DJ walks toward the hanging Heather and sees the 'conscience momma' telling him that he did a bad thing and she would never forgive him.

At the Gilded Chris Ceremony, Justin and Lindsay are in the bottom two. As Chris is about to name the contestant who receives the last award, DJ abruptly confesses about his illegal alliance with Chef and votes himself off the show. Chef tries to talk to DJ, only for DJ to scold him in front of everyone and then prepare to leave. Before leaving, the rest of the cast realized that he is the one who's been making the recent delicious food. All the castmates want DJ to stay, with Justin even saying that they should have Chef voted off. However, DJ wants to clean his conscience and getting voted off will fix everything that he did with Chef, hoping it will make his mother proud. Once DJ enters the Lame-o-sine, Owen tries to stop the vehicle because he wants DJ to stay with the castmates and make food for them but fails. Chris signs off the show while holding Owen's face and telling him that in the next episode they will face the most horrible thing ever, Chef's cooking. Owen then drops to the ground and pukes on Chris's shoes as the episode ends.

DJ is sleeping with a doggie plush toy.

Owen and Izzy talk with each other.

.. and play cards with each other.

DJ tosses a spoon at Chef.

Chef and DJ talking to each other in the kitchen again.

Heather calls Beth and Lindsay "spineless followers", causing Lindsay to take the leadership of her team.

Beth reveals to Lindsay that she can't scream.

Beth explains to Lindsay why she can't scream.

...until Owen comments that it's not scary.

Lindsay takes leadership of her team.

Chef scares DJ from behind.

Lindsay gets scared as Beth enters the outhouse.

Beth, as the killer, scares Lindsay during the challenge.

...but both of them have to fake their terror after being so focused on making out.

Heather and Duncan are both disgusted by the kiss.

The Gaffers nearly get scared to death by Chef Hatchet and his chainsaw.

DJ faints after Chef with the chainsaw.

DJ dreams that his mom is angry at him for being in an illegal alliance.

Chris tells the Grips a scary story about the film lot.

Chris explains the challenge to the Gaffers.

Harold's plan of scaring the Grips.

"I can't believe we're putting our team's fate into the hands of the great dorko."
- Duncan

...which scares the Grips.

Duncan is mad at Harold for sticking a hook in his soccer ball and his unsuccessful attempt at scaring the Grips.

Duncan takes charge of his team.

Blood is leaking down the wall.

Lindsay yet again manages to figure out the trick.

After their plan fails, the Gaffers ask DJ's advice.

After the lights are turned off and the Grips hear noises, Lindsay tries to console her team.

Heather is dangled from the ceiling in a costume of a security guard.

Lindsay escapes from the tent, securing victory for the Gaffers.

DJ is upset about scaring the Grips.

Justin and Lindsay are in the bottom two.

The Killer Grips are shocked when DJ quits during the elimination.

The Screaming Gaffers are shocked as well.

DJ tells Chef off when he tries to convince him not to say anything.

Owen and Duncan try to convince DJ to stay.

DJ walks into the Lame-o-sine.

Owen tries to stop the Lame-o-sine in order to ask DJ if he will make more food.

Chris reminds Owen that he will be eating Chef's cooking again.

Chris cringes in disgusts after Owen vomits on his shoes.