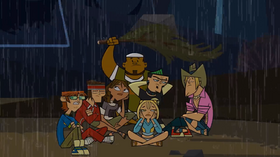 An all-expenses paid trip to the Tuck Shop

Katie
The two teams must spend an entire night alone in the woods. While two teammates are lost in the woods and start a fight that jeopardizes their friendship, one camper pulls a prank on her team. Among all these events, an unfortunate rainstorm begins, leaving both teams without any shelter. Another camper is voted off the island, leaving another incredibly sad.

Chris explains to the campers around the campfire that their next challenge is to survive a night in the woods with the provisions given at their campsite and return to camp the next morning. The team that returns first wins the challenge and gains invincibility. Heather and Duncan are given maps and compasses — though Courtney snatches the map from Duncan — by Chris, who warns them about bears. Leshawna shares her fear of bears, but Owen reassures her by fabricating a story about a previous bear experience that he and his grandfather had. Izzy adds her own story of a bear rummaging through her neighbor's garbage with spaghetti noodles dangling from his teeth, leading her to believe the bear had eaten her neighbor's cat.

Trent tries to speak to a downtrodden Gwen on the way to the campsite after hearing her diary read in the previous episode, but she rejects his efforts to comfort her. Heather plots to eliminate Gwen after she dumped Harold's red ant farm into her bed, despite Trent pointing out that she was justified in doing so. Elsewhere, Courtney is leading the Killer Bass to their site when Katie spots a blueberry bush, and she and Sadie stop to eat some.

After finishing the berries in the bush, Sadie takes notice that the rest of the team is missing. The two know they are lost after crying out for them, which first causes them to panic.

When the Gophers arrive at their campsite, Owen notices there is no food. Trent deduces that since it's a survival game, they'll have to fend for themselves. Owen, claiming to be a hunting expert, goes into the woods to get their food. Meanwhile, Katie and Sadie, still lost, get into an argument as Sadie criticizes Katie's poor sense of direction. As night falls, their arguing continues to escalate, which is mimicked by a pair of squirrels nearby, and culminates in their friendship ending once the challenge is over.

At the Gopher camp, the campers become hungry while waiting for Owen, when a delivery man arrives with a pizza for the camera crew, much to their annoyance. Owen returns with a catch of fish, which everyone, except for Heather, is grateful for. Izzy attempts to bite into one before sheepishly asking if it's better to cook it first. Owen tells the others that his grandfather taught him how to fish, and, in one incident, a shark bit him in the butt. He drops his pants to show off the scars, but only Izzy is impressed by it.

While the Killer Bass are setting up camp, Geoff tries to compliment Bridgette, saying she pitches a tent like a guy. When this doesn't seem to flatter her, he tries to explain what he really meant was that she isn't afraid to get dirty.

While Duncan and Courtney argue over gender roles regarding food preparation, DJ arrives with a sick rabbit in his arms, which Duncan suggests should be their dinner. DJ intends to make it a pet, and names it Bunny. By this point, Duncan notices that Katie and Sadie are absent. The missing campers in question are still wandering in the woods, realizing with horror that they have been unintentionally walking in a large circle. They panic after hearing an owl in the darkness and run screaming through the woods into a cave. Sadie is scared further when a bat flaps around her head, and, after it leaves, she resigns herself to the fact that they will die.

Back at the Gopher camp, Owen is telling the others the story of how he and his grandfather fought a bear when Trent notices that Izzy is missing. They attract the attention of a nearby bear while calling out to her, which scares everyone — especially Cody, who wets himself — and forces them to flee by climbing a tree. At the Bass camp, Bridgette is spooked by an owl and reveals that she is afraid of being alone in the forest, prompting Duncan to tell the tale of a murderer with a hook for a hand. He scares the campers by taking out a hook from his right hand at the end of the story. Courtney chastises Duncan for his stunt, but when the owl's hoot startles her, she leaps into his embrace.

The Gophers call upon Owen to deal with the bear, but he reveals that he was only being theatrical with his story, and is subsequently blamed for attracting the bear in the first place. Lindsay fears that the bear ate Izzy, which Heather points to as a good thing, since the bear would no longer be hungry, much to everyone's shock. The branch Leshawna was sitting on gave way, and she fell near the bear, who moved in to attack her. Leshawna cries for help, but the bear suddenly speaks up. When the bear's head is removed, it reveals Izzy in a costume.

At the Bass campsite, the campers — with the exception of Duncan — are too terrified by Duncan's story to leave their tent or sleep. Bridgette eventually leaves the tent to use the toilet, preferring not to share DJ's jar, but when she walks outside, a colony of bats flies past her, one flying right into her face. Bridgette's leaping shadow frightens the campers, and when she inadvertently kicks an ember from the campfire into the tent, it burns down.

After Izzy's scare, the Gophers are enjoying their fish dinner when another bear emerges from the bushes. Owen tries to remove the bear's head, thinking it's a joke played by Chris, but discovers that this bear is real, forcing the Gophers to climb the tree for protection once more. As Courtney is berating Bridgette, it starts to rain, leaving the Gophers and Bass without shelter, while Katie and Sadie remain lonely and terrified in the cave.

By the next morning, the rain has ceased, and Katie and Sadie wake up from a long night in the cave, only to flee immediately after encountering the same bear that attacked the Gophers. At the Bass camp, Courtney wakes up cuddling with Duncan and accuses him of cuddling her. Duncan mocks her denial while smugly refuting her accusation.

Back at camp, Chris is preparing the campfire for that night's bonfire ceremony when the Killer Bass come out of the woods, declaring victory. The Screaming Gophers arrive a moment later and, seeing the Bass already there, Heather blames Izzy and Owen for them losing the challenge. Chris stops the Bass' celebration, pointing out that two of their members are missing. Courtney dismisses Katie and Sadie's absence casually, saying they were eaten by wolves, which Duncan confirms, but the two soon appear, happy to have made it back and babbling about how they got lost. Now that they're safe, Katie and Sadie apologize to each other for the hurtful things they said during their fight and reaffirm their BFFFL status. Chris declared the Gophers the challenge winners and awarded them an all-expenses-paid trip to the Tuck Shop, right after Katie and Sadie arrived last, leaving the girls with their angry teammates. The Gophers enjoy their Tuck Shop winnings in their hot tub, though some are disgusted when Owen vomits after eating too many snacks.

At the campfire ceremony, the marshmallows go out to everyone except Katie and Sadie, who become upset, knowing that they will be split apart. The last marshmallow goes to Sadie, and Katie is sent to the Dock of Shame. Sadie refuses to let Katie go, but Katie encourages her to continue on without her. Later, at the Bass' cabin, Duncan apologizes to Courtney for scaring her with his hook man story the night before. Courtney insists that she was not scared, and denies the existence of a hook man, but screams in fright when Duncan suddenly pulls out his hook prop again. Courtney gets enraged and walks away, exclaiming how much she despises him, even though Duncan is convinced she doesn't, as he relaxes and puts his hands behind his back, inadvertently piercing himself with the hook.

The contestants listen to Chris explaining the challenge.

The Gophers listening to Chris talk about the safety of camping.

Chris gives the teams maps and compasses for the challenge.

Owen brags about killing a bear once.

Izzy begins to scare Lindsay with a story.

Katie and Sadie after they eat all the blueberries.

Katie and Sadie laugh over memories.

"Well, at least this will be a good week for my diet."

Katie and Sadie begin to argue.

A pizza arrives, but it turns out to be for the camera crew.

Owen catches fish for everyone.

Izzy forgets that you're supposed to cook the fish first.

"If it wasn't for me, you wouldn't even be on this show."

"You're just saying that because I'm prettier than you."

Bridgette is not impressed by being told by Geoff she pitches tents like a guy.

DJ and Bunny for the first time.

Katie notices that she and Sadie have been walking in circles.

Katie is scared in the woods.

"We were out in the woods when we came upon the great beast...

"We grabbed our shotgun. We knew it was either him or us...

"One shot was all it took."

The Gophers are startled by the bear.

Several of DJ's teammates hide in fear behind his back.

Courtney jumps into Duncan's arms after hearing a wolf.

A scared Cody sits on the tree.

Owen reveals the story about he and his grandpa killing a bear wasn't true.

"She should have just peed in her pants like Cody."

Leshawna screams in terror at her would-be death.

Izzy laughs about her prank in the confessional.

The Bass, except Duncan can't sleep.

Bridgette and DJ are too scared to leave the tent.

Bridgette is attacked by a bat when she leaves the tent...

...and accidentally kicks a burning coal onto the tent, which burns down instantly.

Cody wets himself again after seeing a real bear.

Izzy, Heather and Owen are irritable in the morning.

Katie and Sadie awake to see a bear.

Chris notices that Katie and Sadie are missing..

..to which Courtney says that they probably got eaten by wolfes.

The Killer Bass listening to Katie and Sadie's story.

Katie and Sadie apologize to each other.

Katie and Sadie cheer after thinking they're safe.

Courtney yells at Katie and Sadie.

Screaming Gophers win the challenge thanks to Katie and Sadie arriving late.

The Killer Bass are furious at their loss.

The Gophers enjoy their reward in their hot tub.

Heather is grossed out when Owen barfs.

The Killer Bass at the Campfire Ceremony.

Katie and Sadie in the bottom two.

Katie is eliminated from the game.

Katie tells Sadie that she has to win for both of them.

Katie leaves with the Boat of Losers.

Sadie mourns Katie after her elimination.

...but Duncan scares her again with the hook.

Retrieved from "https://totaldrama.fandom.com/wiki/The_Sucky_Outdoors?oldid=1694670"
Community content is available under CC-BY-SA unless otherwise noted.