There Are No Hoppy Endings 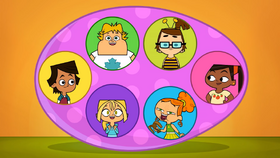 Chef struggles to maintain his sanity when the kids continue to blame a stuffed rabbit named Hoppy for everything they do wrong.

The episode begins with the daycare which has been decorated for Easter. Bridgette goes over to Hoppy and asks him how storage was. Bridgette sees Beth play baseball with a giant Easter egg, but Bridgette objects, saying that she will eat it. When Bridgette discovers it's white chocolate, she encourages Beth to smash away. Unfortunately, she manages to hit the egg so hard it bounces around the daycare, causing destruction and hitting the other kids. The egg accidentally causes Duncan to get "reverse face-planted" into his Easter dragon painting. When Beth hits another egg, it hits him in the face and causes him to hallucinate. In his hallucination, he sees four flaming birds from his painting and his polka-dotted egg. He happily slides down it and lands in an Easter egg basket with two dragons and laughs. He sees Beth as an actual bee until he wakes up. Duncan ends up enraged at Beth, and "losing his words." Chef comes in and tries to calm Duncan down to get him to say what happened. He is only able to stutter "Beth," "bat," "ball," and "face." Chef asks Beth how Duncan got hurt, and she blames Hoppy(Due to The bat being on hoppy when She threw it away realising what she did). Chef humors her and pretends to believe it is Hoppy and asks her if he is sorry and won't do it again.

Chef decorated the daycare for Easter.

Chef as he decorates his office.

Bridgette asks Beth to not smash the Easter egg.

Beth tells Bridgette to relax because it's white chocolate.

Duncan starts seeing flaming birds after Beth hit him with another Easter egg.

Duncan lands in a basket full of Easter eggs.

Duncan is angry at Beth.

Duncan is unable to tell Chef what happened to him.

Beth tells Chef that Hoppy won't ever hit anyone ever again.

Duncan is surprised that Chef believed in what Beth said to him.

Beth says sorry to Duncan for hitting him with an Easter egg.

.. and splashes it onto Duncan's face.

Beth is surprised by Duncan thinking that she's a genius.

Duncan tells the kids that as long as they blame Hoppy for everything, they can do whatever they want.

Chef notices that someone ate all of the chocolate eggs.

Noah and Owen tell Chef that Hoppy ate all of the chocolate eggs.

Chef's reaction when Noah and Owen tell him that Hoppy ate all of the chocolate eggs.

Izzy says that she found a way as to how she can fly.

Izzy uses a bird to fly.

Izzy tells Noah and Owen that she can see Neptune and Uranus.

Izzy starts falling down the sky.

Izzy blames what happened on Hoppy.

The kids take a nap.

Chef tells the kids that he set the thermostat to "sleepify".

The kids want to build a snow bunny.

Duncan sets the thermostat to Canada.

Chef's reaction when he sees that it's snowing.

Chef orders some mittens for the kids and himself.

MacArthur is dissapointed that she didn't get invited to Chef's mitten party.

The kids play with snow.

The kids tell Chef that Hoppy set the thermostat to Canada.

Chef tells Hoppy that he's locking him up.

Chef's reaction when he sees that Hoppy disappeared.

Harold blames what he did on Hoppy.

Chef is surprised by Hoppy.

Chef's reaction when he sees that someone left the chocolate fountain on.

Beth tells Chef that Hoppy left the chocolate fountain on.

Chef repeatedly hits himself with a giant carrot.

Owen tells Chef that Hoppy packed the simple bake oven with Easter chocolate and it blew up.

Duncan and Owen as they eat whipped cream.

The kids keep blaming every bad thing they do on Hoppy.

"The man believed a stuffed rabbit was causing trouble. He was already broken!"
- Beth

Chef finds out the kids were using the Easter bunny against him.

Chef takes Hoppy away from the kids without them noticing.

Chef dresses up as Hoppy.

Duncan tells the kids that they're all about to need Hoppy.

"It's time for an Easter egg fight."
- Duncan

The kids' reaction when Duncan tells them that it's time for an Easter egg fight.

The kids' reaction when they find out that they can go home now.

The kids find out that the Hoppy they beat up was Chef.

Chef is dissapointed that the kids gave him white chocolate.

Chef gets scared by Gerald.

Retrieved from "https://totaldrama.fandom.com/wiki/There_Are_No_Hoppy_Endings?oldid=1643973"
Community content is available under CC-BY-SA unless otherwise noted.