This Is The Pits! 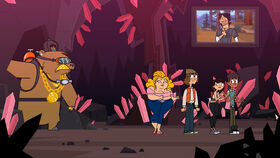 A buffet from Darwin's All You Can Eat Food Safari
The teams are sent down into a cave complex and must navigate their whole team out. One has a hard time trying to impress another while someone's fear causes her team to be separated. Two partners finally reach their breaking point. In the end, no one wins the challenge after disobeying the host's rules, but he decides to make things interesting by splitting up two partnerships.

At Pimâpotew Kinosewak's treehouse, Jasmine wakes up on her branch and hops down onto the balcony, using the roof as a landing. This startles Max and Topher out of their sleep. Max confronts her outside, complaining that the noise she made cut short his "delightful" dream of being carried like an Egyptian king. Jasmine mockingly tells him his "servants" have stuck around, in reference to the ants crawling over Max's body. He is appalled by the infestation in his bed and orders Scarlett to remove them. In the confessional she expresses her desire to see him get eliminated. She also realizes that the others will grasp the identity of the true mastermind once they see how incompetent Max really is. Max ends up using a magnifying glass as a "death ray" to burn the ants, but ends up setting his own bed on fire. She smiles smugly while Topher is put off by it all.

At Waneyihtam Maskwak's cave, Sky dreams about a muscular Dave proposing to her to be his jungle queen. She wakes up, and finds that in reality, he is actually offering her some berries. Sky denies having a crush on him and believes he understands that she is focused on the competition. Dave realizes that Sky is hesitant about getting into a relationship, convinced it's because he hasn't kissed her yet. Sugar takes their bonding as proof that the two are in an alliance. When Sugar tells Shawn that Dave or Sky could team up to vote off her or him, Shawn indicates that he wouldn't mind voting off Sugar. She recommends to Shawn that they form one of their own before it's "game over" for one of them. Shawn exclaims in the confessional that he'd "rather be eaten by a zombie". Dave attempts to wipe a berry stain off Sky's cheek, but Sugar beats him to it by spitting on her hand and vigorously rubbing it off. Both of them are disappointed at this development, while Sugar is determined not to allow their relationship to progress. Chris calls the contestants to gather for the challenge.

Chris tells the contestants that their challenge is to get into hamster balls and run around the island until they cross the finish line. All of the contestants reluctantly comply, except for Jasmine who has huddled on the ground shivering in terror, revealing that she has claustrophobia. Chris tries to snap her out of it by feigning sympathy, but has little success, so instead he has Chef pick her up and toss her in. Chris and Chef then push the balls into a long drop that sends the competitors down into a cave. Dave exits Maskwak's ball, followed by Sky, who falls on top of him. Dave is ecstatic as he believes the near death experience will make her want to kiss him. However, Sugar vomits up the blueberries that she ate. Sky realizes just in time and steers clear, but Dave who still has his lips puckered for a kiss, opens his eyes to see a stream of puke fly towards him. Being covered in Sugar's puke causes him to go into another panic attack. Topher thinks Chris has pulled a "host fail" by putting them in a situation that they are unable to be narrated. On a television high up on the cave wall, Chris's image appears informing them of the truth: the balls were a trick to lead them to their real challenge, which is to navigate out of the cave. He points out two bags on the side; one contains useful supplies, claimed by Max for Kinosewak, and the other has random, unhelpful objects, taken by Sky for Maskwak. Along the walls is a series of tunnels, some will help them exit safer and faster than others.

Without warning, Jasmine begins to panic and pounds on the walls. The cave shakes, threatening to collapse on itself. Shawn discourages the way Jasmine is acting before Sugar screams so loudly that it results in a cave in. The contestants scramble to safety. Kinosewak gets separated as Topher, concerned about his hair, knocks Jasmine into a random tunnel, and it is sealed off by rocks. Scarlett leads Max into another while Maskwak sticks together. Topher provides the still anxious Jasmine with night vision goggles to see. He complains about Chris's stolen phone having no bars, and irks Jasmine by narrating her actions. They arrive to a room where there is a drop. The bottom is blanketed in fog, thus making it impossible to see. Jasmine fearfully clings onto Topher, causing him to suffocate. He passes out and sends both of them tumbling forwards. Contrary to their earlier beliefs, they are safe, as the fall was only a few deep feet. After a while longer, the phone detects a signal, and Topher follows it to get them out. Their exit is later revealed to be a hole dug by gophers. While Topher starts to go back, Jasmine doesn't allow it and uses his head in order to bust them out from underground. Meanwhile, Max and Scarlett find themselves in a room full of stalactites. She finds this strange because of the lack of water on the cave floor. Chris warns them to control their volume as he releases a crocodile. As the crocodile bites Max, he screams in pain and it causes the stalactites to collapse. The two are unharmed, however, the crocodile is demolished and its interior is shown to be robotic.

Scarlett is intrigued, and attempts to put together a remote control which will allow her dominance over all the other robots on the island. The two load into an elevator that Max locates. Before the doors close, he throws Scarlett's remote out. In the confessional, she declares that she officially hates him. The elevator gives them the ability to safety exit the cave off-screen. Team Maskwak finds themselves in a seemingly normal part of the cave. Dave and Sky attempt to kiss again, but Sugar interrupts them by belching loudly, which awakens a swarm of bats, causing Dave to kiss a bat instead. Next, they find themselves in a room full of glow slugs, one of which Sugar eats in order to provide a light source for the team. The final room they appear in is a room full of crystals guarded by Scuba Bear, now wearing an abundance of jewelry and known as "Bling Bear". Chris warns them not to take any crystals, but Bling Bear pursues them despite no one having stolen anything. Dave and Sky are confused, but a succeeding confessional shows that someone did, in fact, swipe something: Shawn. The team retreats and jumps into a pool of water. Bling Bear ceases his attack, perplexing Sky since he is wearing the necessary gear to continue.

Sugar finds a large hole in the wall, which they use to escape the cave. Much to the disgust of everyone, it leads out the toilet of the confessional, causing Dave to collapse. Chris expresses his aggravation that neither team actually completed the challenge correctly, so both teams lose. At the elimination ceremony, he reveals what would have been their reward, a gourmet dinner, before announcing that it would be the dinner that would be eliminated. Chef then proceeds to set the dinner on fire and burns himself in the process. Chris then notes that one couple is on the verge of entering "smooch town", getting too close, and decides to implement a team swap. Although Sky believes that Chris is talking about her and Dave, Chris reveals that the "couple" he is talking about is none other than Max and Scarlett, much to Scarlett's embarrassment as she nervously tries to defend herself that the two of them are not in a relationship. Chris sends Max over to the Waneyihtam Maskwak and selects Sky to replace him on the Pimâpotew Kinosewak, devastating Dave.

Max and Topher are awakened by Jasmine.

Max accidentally sets fire to his bed while trying to kill some red ants.

Sky dreams of a muscular Dave offering her a ring...

...when he is actually offering her berries.

Sugar is mad about Dave and Sky and tries to make an alliance with Shawn.

"There's no nice way to say this: I'd rather be eaten by a zombie!"

Sugar uses her saliva to wipe the berry juice off of Sky's face...

...and eats the berries.

Chris forces the contestants to get inside of the two balls.

Chris pushes the balls into a big pit.

Sky falling out of her ball.

Dave tries to kiss Sky after she lands on him...

...causing him to freak out.

Sky finds a Beardo beatbox CD in one of the bags.

Sky tries to decide which way to go.

Jasmine is eager to get out of the cave.

Team Maskwak realizes that the cave is about to collapse.

Team Kinosewak is split up between Jasmine and Topher...

...and Max and Scarlett.

Topher "hosts" as he and Jasmine try to find their way out of the cave.

...which ends up making her belly button a light source.

Max attempts to command a crocodile.

Scarlett finds out that the crocodile is a robot.

Scarlett tries to figure out the code.

...causing Topher to faint and both to fall.

Jasmine and Topher discover the shallowness of the hole.

Shawn puts his team in danger due to his affection towards shiny objects.

Max and Scarlett find an elevator.

...and throws it out of the elevator.

Scarlett is unable to retrieve the machine before the elevator closes.

Scarlett's hatred for Max peaks after he throws away her remote.

Sugar knocks the others into the water.

Sugar finds a way out.

Maskwak sees their way out.

Shawn, Sky, and Dave run out of the confessional...

...but Sugar doesn't mind the stench.

Dave is left traumatized after learning he climbed through the confessional.

Jasmine and Topher crawl up a tunnel.

Jasmine refuses when Topher wants to go back down the tunnel.

Jasmine uses Topher to bust her way out...

... and manages to get her and Topher out of the cave.

- Topher, after being used as a human battering ram.

Max and Scarlett arrive last, leading Max to believe that the others took a "faster elevator".

Since there is no winner, Chef burns the intended reward, along with himself.

Dave is devastated after hearing Sky will be on the different team.

Retrieved from "https://totaldrama.fandom.com/wiki/This_Is_The_Pits!?oldid=1628030"
Community content is available under CC-BY-SA unless otherwise noted.