Three Zones and A Baby 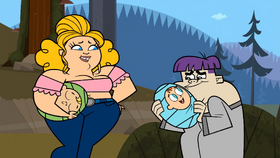 Topher
The two teams slowly adjust to their new members as they are faced with their most dangerous challenge yet: babysitting. As they quietly run through three deadly courses, one contestant is encouraged by her new teammate to forget about her relationship with her now rival, while another's maternal side is revealed. One's desire to replace someone else distracts him from the challenge, leading to the downfall of his team, and ultimately sending him flying.

The episode begins with the Pimâpotew Kinosewak in their shelter, now with their new teammate Sky, with Scarlett studying her REM while she sleeps. Scarlett concludes with telling her that she had slept well. Jasmine greets Sky with a basket of fruit, but when she seems saddened about not being with Dave, Jasmine tells her that she can't trust Dave, still scorned from what Shawn did to her. All the while Shawn is situated outside and watches the exchange, believing that they were chatting about love and considers the prospect of a double date with him, Dave, and their girls.

The episode continues with the Waneyihtam Maskwak in their cave, now with Max as part of the team. He awakens and begins complaining about how uncomfortable his sleep was, but Sugar begins to laugh at his mannerisms. Sugar then notices Dave and tells him to cheer up, as well as cautioning him to not waste the "evil genius" they now have on their team as they did with the wizard." Shawn arrives in the cave and finds a forlorn Dave, still distressed over losing Sky to the other team. Shawn offers Dave some tree-bark that he brought as food, but as Dave notices some mites running around on the bark he declines and states he would be fine with starving. Shawn attempts to cheer his friend up, by telling him now that their girls were together they would be conversing about them. This is finally enough to raise Dave's spirits, just in time for Chris to call everyone over for the challenge.

Chris explains the challenge, "Hush or Die," to the contestants. They first must race through "The Lion's Lunch"; a zone full of sleeping lions and rattlesnakes, where the rattlesnakes, if awoken, could cause a chain reaction that will result in the lions waking up. The second zone, "The Pasta Blaster," features a blindfolded Chef using his sense of hearing to determine where they are so that he can fire a pasta cannon at them. They must also keep quiet to avoid waking up "Pasta Bear" in his cave. The third and final zone is "The Avalanche Zone," where they must cross a cold, winter terrain underneath a snow-covered ledge to the finish line. When Topher continues to make fun of Chris and mock him for "running out of creative steam" and calling him "old," Chris decides to up the danger by forcing all the contestants to carry a baby, who must avoid crying in order for them to avoid the dangers.

The contestants start the challenge, narrowly making it through the Lion's Lunch. Despite Jasmine insisting that Dave is the enemy, Sky quickly saves Dave from a rattlesnake before it can bite him, claiming in the confessional that it was just "a parting gift." Meanwhile, Max continues to show a strange parenting side whenever his baby begins crying, using baby-talk to calm it. This noticeably amuses Sugar on many occasions, with Max dismissing it as an act whenever she catches him. When Topher accidentally wakes up a lion with Chris's cell phone, Scarlett and Jasmine work together to appear more threatening to the lion, with Scarlett jumping on Jasmine's shoulders and roaring, scaring it away. Team Kinosewak successfully makes it through The Lion's Lunch, while only Shawn has finished from Team Maskwak.

In the "Pasta Blaster" zone, Chris reveals that there are booby-traps spread out on the ground. Topher steps on an air horn and alerts Chef, who blasts Topher and alerts Pasta Bear (which is Scuba Bear with a blindfold, using his sense of smell to find the contestants). Although Dave warns Sky of the same air horn, Sky places the same air horn in front of Dave to sabotage him (at Jasmine's insistence), which breaks Dave's heart. He insists on being left behind, though Shawn refuses to leave him and helps him throughout the challenge. To motivate Dave, Shawn tells him that Sky likes winners, and not quitters. This motivates Dave, but he cannot move as he was paralyzed by the snake bites.

Once Team Kinosewak reaches the Avalanche Zone, they must hand over their babies to an intern before they continue on to the finish line. Although Team Kinosewak is about to cross the finish line first, Topher gets the call he's been anticipating from a bearded producer of the show, asking if he'd like to replace Chris. Topher cheers excitedly, causing the snow above them to fall onto their team and bury them, while Team Maskwak slides across the snow, using Dave as a snowboard. As they celebrate, it is revealed that Max initially refused to give up the baby to the intern, due to his growing attachment to it, and hid it in his back.

At the elimination ceremony, despite Scarlett angrily telling Topher that he is eliminated, Topher is confident about what will happen. When Topher is the only one without a marshmallow, he happily declares he's not the one being eliminated, and that he'll be replacing Chris as host. This is short-lived, as Topher finds out that the "producer" he spoke to is actually Chris in disguise. Chris gives Topher one final piece of advice to "never play a player" in show business, then bids him good riddance as he blasts Topher away in the Cannon of Shame.

... while Sugar laughs at her new teammate.

Topher proves that he cannot keep up with his teammates.

Chris reveals that there are rattlesnakes in the first zone, to awake the lions.

Topher is the newest casualty of Chef Hatchet's meatball bazooka.

The challenge is made harder, thanks to Topher.

The contestants now, need to carry babies with them.

Team Kinosewak with their babies.

Dave sees Sky helping him as a sign that they'll be together forever.

...and wants to associate with it.

A lion awakens and tries to attack Team Kinosewak...

... but Jasmine and Scarlett scare it away.

Scarlett is proud of her technique.

Shawn and Dave wait for the rest of Waneyihtam Maskwak before entering the second zone.

Sugar forgets her baby in the Lion Zone.

Waneyihtam Maskwak after Sugar gets her baby back from the lion.

Topher gets shot again, after giving away his position by stepping on an air horn.

Scarlett and Jasmine work together to scare off Pasta Bear.

Sky catches her, Scarlett, and Jasmine's babies after they get launched by a spring trap.

Topher gets chased by Pasta Bear.

Chef shoots Max after he sneezes.

"Back off, furball! This ain't dinner for two."

"If you keep us from winning, you wish you never met me."

Shawn gives Dave a pep talk, so they can win.

Max supposedly hands over the baby when Chef points his bazooka at him.

Team Maskwak slides on Dave to the finish line.

Max had the baby with him all along.

Scarlett gets her marshmallow before blowing a raspberry at Topher.

Pimâpotew Kinosewak's reaction to Topher's claims on being the new host.

Topher discovers the truth about the "producer"...

... and is eliminated instead of becoming the new host.

Retrieved from "https://totaldrama.fandom.com/wiki/Three_Zones_and_A_Baby?oldid=1628033"
Community content is available under CC-BY-SA unless otherwise noted.