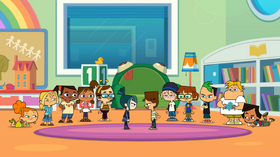 In order to have some peace to do his work, the teacher promises to buy ice cream for the kids if they promise to be quiet. However, one of the kids wants a flavor that the others do not agree on. To settle this, the teacher suggests they play the quiet game to determine which ice cream flavor to buy. After some time, the sole player manages to outlast every other member of the opposing teams in order to claim their prize.

It has been raining for the fourth day in a row. Unable to play outside, the kids instead play in the classroom or more specifically, making a lot of noise and wrecking the entire room. Because of this, Chef is unable to do any of his already piling work. In fact, he can't even find a moment of peace in the washroom. Eventually, Chef loses his patience and promises to buy a tub of ice cream for them if they promise to keep quiet. The kids each voice out what flavor they want but Chef only has one coupon so they have to decide on what flavor to buy and they all agree on chocolate. However, Bridgette realizes that they haven't ask Gwen what flavor she wants but Leshawna warns her not to as Gwen doesn't like doing "normal kids stuff".

Despite Leshawna's warning, Bridgette decides to ask Gwen anyway. From her egg chair, Gwen reveals what flavor she wants; tiger tail. This freaks out the rest of the kids much to Bridgette's confusion. From a commercial video, tiger tail is an orange and black color ice-cream that is supposedly made from an actual tiger's tail. This disgusts even Izzy. Courtney tries to negotiate with Gwen by explaining that Chef will not buy them any ice cream if they can't agree on the same flavor but Gwen still insists on tiger tail. Frustrated, Courtney asks why Gwen has to be so difficult to which she explains that she doesn't have to like something just because everyone else does. Even when Duncan and Courtney threaten to break her precious chair, Gwen will not change her mind. With the kids getting noisy again, Chef propose that they play the quiet game with the winner deciding on what flavor to buy. In reality, Chef is using this in order to get some peace while he finishes his work.

As Gwen is the only person wanting a different flavor, she has to face the other eleven kids. As Courtney tries to formulate a plan to win, Chef starts the challenge moments before she can finish her sentence, immediately eliminating her. Despite this minor setback, Courtney is confidant that the others are good at keeping quiet only for Bridgette to voice out that Gwen is best at keeping quiet, eliminating her as well. With two members down, Courtney orders the others to get Gwen to make a sound. Harold, Jude and Izzy try to make funny faces in order to get her to laugh but none of their attempts work. Instead, Izzy and Jude laugh at Harold upon seeing his face which they think is funny. A confused Harold tells them that he is not making a funny face, only to get himself eliminated as well. Amidst Courtney scolding her team, Gwen suddenly disappears and the kids spread out to find her. Duncan checks the egg chair only to find a swarm of bats in it and scream in terror, eliminating him from the game.

The game continues with each kid attempting to get Gwen to make a sound only for Gwen to turn the tables on them. Meanwhile, Bridgette and Chef have been secretly cheering for Gwen to win, the latter using the opportunity to complete his remaining errands. Beth tries to scare her with a pair of cymbals only for "Gwen's" head to rip off and runs away while voicing her guilt. Leshawna tries to hand her a toy bunny in order to get her to laugh but Gwen instead presents her with a crown and flower to make it as if she wins a beauty pageant. A confused Leshawna asks what she wins only to realize that she has been tricked to speak. Noah and Owen attempts to scare her only for her to hand them two presents containing aggressive rats that attack Owen, causing him to scream in terror. Seeing how good Gwen is in the quiet game, Noah sees no point in continuing and forfeits. Before Chef can declare Gwen the winner, Cody enters the room with his mouth tape shut. Apparently, he is so quiet to the point the others even forget he is present. With only Gwen and Cody remaining, the game continues.

Fast forward 78 years later, the kids have grown up and are now in the twilight of their years. Cody, having reached the end of his life, gives out his final breath, and is thus finally eliminated. With that, Gwen is declared the winner of the game and receives her tiger tail flavor ice cream. During those 78 years, Chef has earned a PhD in education, wrote two novels and built his dream boat by hand. As Gwen and her remaining friends enjoy the ice-cream, Gwen realizes that tiger tail isn't as great as it sounds and that chocolate is actually better. It is then that Courtney realizes that they have wasted 78 years for a flavor that isn't actually good and slams her head on her table as the episode ends.

At the whiteboard, a drawing of Owen comes to life and feels hungry. The drawing walks out of the the picture and draws a ham with a red marker pen before returning to the picture to eat it.

The kids play inside the daycare because it's raining outside.

Leshawna plays on a guitar..

A bear hits the window while Chef talks on the phone.

Owen tells Chef that Beth got stucked in the toilet.

Chef says that it's been raining for 4 days straight.

Jude about to ride on a skateboard.

Chef made sloppy joes for the kids.

.. and ruins the sloppy joes he made for the kids.

Chef orders the kids to go outside..

.. but he quickly changes his mind after he sees how much it's raining outside.

Chef goes to the bathroom.

Cody tells Chef that he can't find his socks.

Izzy tells Chef that she's so hungry she could eat a horse.

Cody cries after Izzy tells him that people turn horses into glue.

Izzy tells Chef that somebody forgot to flush the other toilet.

Chef is annoyed by the kids.

Chef orders the kids to stop messing around.

Chef tells the kids that if they are quiet for the next hour he'll get them ice cream.

The kids talk about what ice cream flavour they want.

Chef tells the kids that they have to agree on one ice cream flavour.

Bridgette wants to ask Gwen what ice cream flavour she would like to eat.

Bridgette decides to ask Gwen what flavour she would like.

Leshawna is angry at Bridgette for asking Gwen what flavour she would like.

.. so Leshawna shows her a commercial that explains what tiger tail is.

Bridgette wants Gwen to come to her house so they can play.

Duncan and Courtney try to make Gwen change her mind.

Chef wants the kids to play the "Quiet" game.

The kids all agree to play.

Courtney talks about what the kids have to do to win.

Courtney tries to finish her sentence right after the game started.

Courtney is the first one to lose the game.

Chef says that the longer the game goes on, the more time he'll have to get his chores done.

Courtney tells her plan to the kids.

.. and loses the game with it.

Courtney orders the kids to make funny faces in front of Gwen.

.. but neither of them make Gwen laugh.

Jude and Izzy laugh at Harold's face and all 3 of them get out from the game.

Gwen scares Duncan with her bats..

Beth thinks she killed Gwen so she freaks out and gets eliminated from the game.

.. and Chef are rooting for Gwen to win.

Courtney tells Leshawna what she has to do in order to get Gwen out of the game.

Noah and Owen try to get Gwen out of the game.

Noah eliminates himself from the game as he thinks he will never beat Gwen.

The kids are angry at Bridgette for rooting for Gwen.

Noah thinks the game won't last long as there are only 2 people left in the game.

The game lasts for 78 years.

Chef declares Gwen the winner of the game.

.. which makes her cheer.

Chef says that while the kids were playing he build his dream boat.

Bridgette asks Gwen if tiger tail was worth waiting 78 years.

"We hang around 78 years for NOTHING?"
- Courtney

Retrieved from "https://totaldrama.fandom.com/wiki/Tiger_Fail?oldid=1589527"
Community content is available under CC-BY-SA unless otherwise noted.