Too Much of a Goo’d Thing 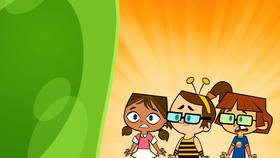 When one kid makes living slime, it starts to consume all the other kids, except for the goth. They then work together to get rid of the monster, until they both end up inside. They all enjoy the inside of the monster until it accidentally gets destroyed.

It's another day at the Daycare, Harold Had just finished building a Ninja Castle until Beth runs through the castle and destroys it. Harold gets mad at Beth for destroying his Castle, But Beth apologies and shows Harold her Slime. Harold gets surprised and tells Beth what is it, Beth tells Harold that it is her Slime, which grabs Owen, Izzy, Duncan, and Courtney's attention. Everyone rushies to Beth and Harold, then Courtney explains that she loves Slime, Beth explains that she can't have it at home anymore, Harold tells her why? but Beth says she doesn't know either. She flashbacks that her entire house is covered in Slime, including her pet cat. Beth explains that she wants to keep her Slime at the Daycare and wants to make more, Harold tells Beth if she can make Slime, Beth says yes and the recipe is in her brain. Beth (sitting on a Swing on the Swing Set) says that she doesn't know how to make Slime, but knows how it is formed.

Later in the Kitchen, Beth puts a bowl on the floor and get's ready to make Slime. Courtney tells Beth that if she knows how to make Slime or Doesn't know how to make Slime. Beth reponses that she knows both. Beth adds Gelatin, Green Food Coloring, 3 bottles of Glue, Glue Sticks, and her Snot. She thinks what to add next and suggests Green Fizzy Soda and Green Flower Fertilizer, before she able to grab it, Gwen comes behind the Trash Can and explains that adding Fertilizer it will be bad, Courtney agrees with Gwen, Gwen says it will react like her pet Rat and Snake. Beth refuses to listen and carries the Fertilizer to her Slime, Gwen says that she will love Beth's Funerals which Frightens and makes Courtney walk away. Beth then adds the Soda and Fertilizer in the bowl and says it's almost ready. Izzy cheers and squishes the Slime with her Bare Feet, Beth swipes the bowl away causing Izzy to fall over. Beth puts the bowl inside to Oven so it can make the Slime Warm and Toasty, Courtney says it will end bad, the Oven then starts moving Crazy, causing Izzy, Owen and Duncan to walk away while being scared. The Oven keeps going Crazy until it stops. Beth says it's ready and opens the Oven door seeing that the Slime is Warm and Toasty, Beth takes it out and shows the class, Owen says that it is moving and the Slime falls out of the bowl, making everyone Gasp. The Slime later starts standing up straight, which causes Courtney and Harold to run. The Slime starts walking to Beth, which causes Beth to Freak Out and is Frightened by her creation, but the Slime hugs her and Beth realizes that it doesn't what to hurt anybody and just wants to be friends. Beth tells the Slime that she will love it at the Daycare, Izzy gives her Googy Eyes and makes them her nose, Beth starts to get confused. Beth (inside the sandbox) says that she made Slime that can come to life and calls it Slimy. Gwen then tells Beth not to make friends with it because she had seen a Movie before and it doesn't end well. She says that in the Movie, the Slime eats everything in sight including Cats, Cars, Babies, Buildings until it eats the entire Planet and earth is just a Big Green Booger floating in Space, but Beth doesn't believe her and says that in her Movie, it's a Buddy Comedy where a Gal and her Slime are best friends. (Beth is seen watching a Movie with Slimy and Slimy eats all the Popcorn, they are both seen jumping up and down on a Bed in Beth's room until Beth throws the pillow on Slimy, then Beth is seen carrying an Umbrella with Slimy, then the two of them both open doors and laugh, the two of them are seen watching the sunset.) Beth explains that the two of them are Best Friends even if their different from each other and no one could tear them apart. Beth explains it's a Feel-good movie which causes Owen to cry. Gwen warns her, but Beth ignores her. Beth then gives a tour about the Daycare. Owen, Harold, Duncan and Izzy join them. Chef Hatchet is seen walking out of his office taking on the phone. Beth tells everyone to hide Slimy. Chef just keeps taking on the Phone, and doesn't see Slimy. Beth says it was a close one and doesn't want Chef to see Slimy. Beth says that they should have some fun. Beth plays with slimy outside only to see Slimy dissolve and re-form again. Izzy throws a ball at Slimy, but Slimy eats it. Harold tells Beth what Slimy is doing. Duncan says that Slimy is really freaky, but Beth reponds that Slimy is just hungry.

Harold is angry at Beth for knocking his blocks over.

Harold asks Beth what is she holding.

The kids' reaction when they hear that Beth brought slime with her to the daycare.

Beth's kitchen is covered in slime..

Beth tells the kids that she knows how to make more slime.

Beth thinks that creating slime shouldn't be a hard thing to do.

Beth tells the kids that they will have to improvise because they don't have all the ingredients.

Beth pours glue into the bowl..

Beth pours soda into the bowl.

Courtney agrees with what Gwen said.

Beth is almost done with the slime's creation.

Beth takes the bowl away from Izzy.

Beth puts the bowl into the bake oven.

The kids as they look at the slime that Beth created.

The kids get scared by the slime.

Izzy puts eyes on the slime.

Beth decides to name the slime that she created "Slimey".

Gwen warns Beth that the living slime is dangerous.

Some civilians get scared..

.. by a living slime monster in a movie.

Beth tells Gwen that what she will do with Slimey will be like a buddy comedy.

Beth imagines herself watching a movie with Slimey..

.. playing with her in her bedroom..

.. and having fun with her.

The kids hide Slimey from Chef.

The kids decide to go outside to play.

Izzy throws a ball at Slimey.

Slimey eats the ball that Izzy threw at her.

The kids give Slimey some apples.

Owen becomes angry at Slimey for eating all of the ice cream.

The kids notice that Slimey ate everything that was in the fridge.

The kids notice that Slimey disappeared.

Cody tells Slimey to catch him.

Slimey catches Cody and eats him.

Slimey is about to eat Duncan.

Leshawna before she gets eaten by Slimey.

Slimey is about to eat Noah.

Courtney tells Beth that Slimey is a monster that eats everything.

Courtney is about to get eaten by Slimey.

Chef says that he always knew that this day would come.

Gwen decides to help out Beth.

Chef tries to slow Slimey down.

Beth says sorry to Gwen for not believing her.

Beth and Gwen notice that Chef is about to get eaten by Slimey.

Beth asks Gwen why are they using vinegar to stop Slimey.

Beth and Gwen decide to run away.

Chef's reaction to the napkin deliveryman getting eaten by Slimey.

Gwen runs out of vinegar.

Gwen tells Beth to use all of her vinegar.

Beth notices that everyone inside Slimey..

The kids and the napkin deliveryman don't want to get out of Slimey.

Everyone gets out of Slimey.

Retrieved from "https://totaldrama.fandom.com/wiki/Too_Much_of_a_Goo%E2%80%99d_Thing?oldid=1609909"
Community content is available under CC-BY-SA unless otherwise noted.