Three Zones and A Baby

Christopher Jacot
Topher was a contestant on Total Drama: Pahkitew Island as a member of the Pimâpotew Kinosewak.

Topher is such a huge Chris McLean fan that he gave himself the nickname "Chris 2.0" and even has a cat named after Chef Hatchet. He frequently goes out of his way to try to talk to Chris, which usually causes him to hinder his team. Just like Chris, Topher can be quite arrogant and frequently admires himself. He joins the show not to win the prize money but to replace Chris as the host, and will attempt to do so at any opportunity, whether it's by taking over his job in announcing the challenges or humiliating him on live TV. He is very ambitious in this endeavor, eventually stealing Chris's cell phone to contact the producers and frequently insulting Chris's age to imply that they need a younger host, such as himself. These situations beg the question of whether or not Topher truly does admire Chris, or was just stroking his ego so as to lower his guard in his attempt to steal his job.

When Topher is introduced, it is immediately obvious that he is a huge fan of Chris, and is eager to indulge in every opportunity to show his appreciation to his idol. He is also under the impression that, his constant kissing up to Chris gives him special treatment. In reality, he is no exception to the host's love of causing pain and suffering, such as when he gleefully orders Chef Hatchet to toss Topher away. His obsession with Chris is to the extent where he even praises Chris for the cruel challenges he comes up with, such as the grease obstacle course in I Love You, Grease Pig!. Chris at first enjoys the attention, but after a while becomes irritated when Topher repeatedly attempts to steal his spotlight.

Soon it's hinted that Topher may have ulterior motives, and he begins making remarks about Chris's age. This leads Chris to worry he's getting old, and goes to drastic measures to look younger. However, Topher continues to press the host on this sensitive issue. By Mo Monkey Mo Problems, it's clear that Topher's true intention is to upstage Chris and take his job. He excuses himself from his team and runs right into Chris. He apologizes to Chris and passes it off as an accident; however, this turns out to be a ruse to steal Chris's cell phone. Using the phone, he leaves a message with the network's producers to plant a "seed of doubt" about Chris's age.

With his plans in motion, Topher eagerly awaits a response in This Is The Pits! This is made difficult when the pit they are in begins to collapse, and he is forced to retreat into the tunnels, and ends up alone with Jasmine. After a while, he begins to irritate Jasmine by constantly checking the phone for bars of reception, and continuously narrating their actions in Chris's absence. They eventually reach a seemingly bottomless chasm, where a fearful Jasmine hugs him tightly in fear, causing him to pass out due to oxygen deprivation. Once they awaken at the surprisingly shallow pit, Topher leads Jasmine to a possible exit by following the path where the phone was getting bigger signal, eventually leading them out.

In Three Zones and A Baby, Topher doubles his efforts to overthrow Chris. He once again annoys Chris before the start of the challenge, by stating the host was "running out of creative steam". As payback, Chris has Chef Hatchet shoot Topher, followed by increasing the challenge difficulty by having them carry babies. Throughout the challenge, Topher expends all his efforts in showing off his ability to the producers, giving them the "Topher Experience", and keeps on awaiting his phone call. His actions cause him to fall behind, such as when he gives away his position to Chef's bazooka after posing for the camera. After repetitively dragging the team down, his teammates become immensely frustrated with him especially Scarlett, who gives him a threatening look. At the final part of the challenge in the "Avalanche Zone", Topher finally gets a call from the producers, and is delighted to hear they them offer him a position as the show's new host. Overjoyed, Topher yells out, causing the team to be buried in an avalanche and costing them the win. Topher is voted off that night, but at first he appears unphased. Confident that he has been inducted as the new host, he proclaims that he would be staying and it is in fact Chris who would be eliminated. However, he is shocked to discover the producer who called him is actually Chris in disguise, and that he knew Topher had his phone all along. Chris gives Topher one final lesson: that he should "never play a playa", before firing a confused Topher from the Cannon of Shame.

In his audition, Topher is in a room with his cat, named after Chef, and a picture of Chris McLean on the wall. He says how people keep telling him he looks like a younger Chris, and how he nicknamed himself Chris 2.0. He yells into a megaphone in an attempt to mimic Chris, which frightens the cat. He then states how he doesn't care about the money and that he just wants a chance to introduce the show like Chris. Chef the cat then attacks Topher, ending the audition.

Topher pointing at something.

Topher giving a thumbs up.

Topher on the ground. 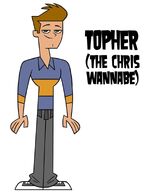 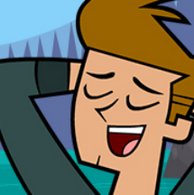 Topher is pushed by Chris in the opening theme.

Topher thanks Amy for bringing them berries.

Topher compliments Chris for how cruel the challenge is in I Love You, Grease Pig!.

Topher narrating the conflict between the twins.

Topher is excited for the day's challenge.

Topher expects that Chris will ask him to co-host.

Topher narrowly dodges a balloon in Twinning Isn't Everything.

Topher is eliminated from the challenge.

Topher tries to start a commercial.

Chris and Topher crash into each other

Topher apologizes for crashing into Chris.

Topher narrates Jasmine's actions in This Is The Pits!

Jasmine hugs Topher in fear, and suffocates him.

Topher uses Chris's phone's reception to lead him and Jasmine out of the pit.

Topher gets taken down by Chef's pasta blaster.

Topher posing in front of the camera.

Topher applies what he learned in on-camera poise classes.

Topher talks to the "Producer".

Topher is fired from the Cannon of Shame.

Topher's cameo in Lies, Cries and One Big Prize.

Retrieved from "https://totaldrama.fandom.com/wiki/Topher?oldid=1600136"
Community content is available under CC-BY-SA unless otherwise noted.