Total Drama All-Stars takes place on Camp Wawanakwa, the setting of Total Drama Island and Total Drama: Revenge of the Island, with fourteen players from the last four seasons returning to compete. This season, contestants are divided into two teams based on their status as a hero or villain, and must avoid the Flush of Shame in order to take home the $1,000,000 grand prize.

For more information about this section, visit: List of Total Drama All-Stars episodes

For more information about this section, visit: List of rewards#Total Drama All-Stars

On Netflix, Total Drama All-Stars contained unedited dialogue and full screen, 16:9 aspect ratio. In November 2020, Netflix's global rights to the show were set to expire, resulting in it no longer being available on the platform. Netflix later confirmed that the show would be staying on for a little longer. However, in February 2021, all seasons of Total Drama were removed from Netflix in some regions, though it remained available in the United States and Canada.

Thirteen of the returning contestants after they are introduced.

Alejandro has returned to compete as well.

Lindsay is the first All-Star to take the Flush of Shame.

A new villain is introduced shortly before Lightning's elimination.

After Jo's elimination, Courtney and Duncan are ordered to switch teams due to their respective villainous and heroic actions in the challenge.

After being caught cheating, Sam is eliminated.

A frustrated Gwen breaks up with Duncan after he continues to ask about Courtney.

Heather finally discovers the highly-coveted McLean-Brand Chris Head, not knowing Alejandro notices where she hid it and uses it to get back at her for what she previously did, eventually resulting in her elimination.

Courtney and Gwen finally make amends with each other.

The Vultures hold the deciding vote to eliminate a team member from the losing team, and they chose Sierra.

Chris announces the merge to the final eight contestants.

Due to blowing up Chris's cottage on the island in order to restore his reputation, Duncan is arrested and removed from the competition.

Chris prepares to celebrate the 100th episode of Total Drama, right before he is captured by Ezekiel.

Cameron is deemed too injured to continue, so Chris decides to remove him from the contest.

Alejandro's knowledge of Mal's secret, results in his later elimination.

After her planned order of elimination is revealed by Mal, Courtney is eliminated and her relationships with Gwen and Scott are over.

The final four participate in the season's penultimate challenge.

... and Scott are both eliminated in a double elimination.

Mike pulling the sword from the stone in his ending.

Zoey pulling the sword from the stone in her ending. 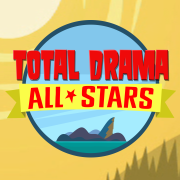