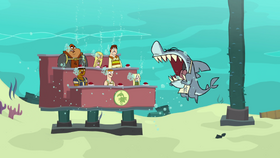 "Getting to know you" trivia game
"Mad Skills" Obstacle Course

Dakota
As the competition narrows down to twelve, the contestants must compete in the first part of their challenge; a tell-all trivia game which ends up embarrassing a few contestants. Due to a few arguments in this challenge, the host makes the second challenge more difficult for both teams. A nonathletic contestant ends up winning the physical-oriented challenge for his team, sending the opposing team to the elimination ceremony. In the end, a wannabe becomes too distracted on her image, and is voted off.

The episode begins with all the contestants' morning routines. In the Toxic Rats girl's cabin, Dawn is seen hanging upside-down talking to a blue bird while Dakota moans that she needs more beauty sleep. In the Mutant Maggots girl's cabin, Zoey asks Anne Maria how she managed to smuggle in so many hair products, to which she reveals they're all stored in her pouffe. Mike talks to Chester in his sleep, while Cameron turns his sleeping bag into his protective bubble to help him sleep.

Brick and Jo are on a morning run and then get competitive of who ran more or harder after crashing into each other. Scott, however, spent the morning looking for the immunity idol, in order to achieve his plans: force his team to lose and eliminate them one by one, which he believes will give the Maggots a false sense of security. Sam and Lightning catch him coming back in the cabin, but he lies to them by saying that he was making out with one of the girls. When they asked which one, Scott responds by saying "a gentlemen never kisses and tells". Not familiar with the phrase, Sam asks Scott if he "kissed a gentleman."

Chris gathers everyone to start the day's competition, and both Sam's video game console and Dakota's cell phone are confiscated from them which leads to both of them suffering from withdrawal. The competition takes place out in the lake in the form of a quiz show. Chris reads out an embarrassing fact of one of the teammates, and the victim had to buzz in and confess; doing so earned a point. Failure to own up had the whole team dunked in the lake, where a four-legged mutated shark, named Fang, now dwells. If a team gets dunked, the opposite team could guess whose fact it belonged to; they get a point if right, or dunked if wrong. It is revealed that Sam farted on his first and only date, Brick wet his pants on the first and last day of school, and B's real name is Beverly. The contestants begin to bicker, and some even quit the challenge. Due to the time wasted by their arguing, Chris cancels the challenge, and tells the contestants that a new one will await. However, this one will be even worse than the first.

Throughout the day, Sam tries to bond with Dakota. However, she rejects all of his advances. The second competition is an elaborate relay obstacle course in a mud pit. The teams were also given blurry glasses so they can't see well. By way of batons, the teams were given their team mascots: a mutant maggot and rat. During the relay, another of Mike's personalities is revealed: a gymnast named Svetlana. Scott, despite being in the lead, intentionally slowed down their team by not immediately handing off the rat to B. Despite everything, though, the challenge came down to Dakota and Cameron trying to land in a giant baseball mitt surrounded by bats. Dakota gets distracted when a group of photographers floats in on a hot-air balloon, allowing Cameron, tangled up in the rope, to get dropped right into the mitt and win for his team.

Before the elimination, Scott and Dawn both suggest eliminating Dakota, with Scott pointing out how easily-distracted she is, and Dawn saying that a great disaster will befall her if she stays on the island any longer. Sam tries to plead with his team to keep Dakota, to no avail. Lightning comments that everyone besides him should be eliminated due to their performance in the challenge. At the bonfire, the bottom two are B and Dakota, with B receiving the final marshmallow, and Dakota, who is busy filing her nails, is eliminated. In the confessional, Sam displays his sadness over losing her, and adds he had been looking forward to making awkward passes at her all season and get rejected every time. Before Dakota is hurled off the island, Chris asks if she has any final words. She says that she does. However, Chris hurls her before she can say anything else and then signs off the episode.

Dakota is unable to sleep due to Dawn's noise.

Jo and Brick crash to each other while jogging.

Jo and Brick begin arguing on who among the two is the better athlete.

Dakota shows Sam the bags under her eyes, which creeps Sam out.

"You like action movies? If you're into ultimate kickboxing, I may have to marry you."
– Mike

The conversation gets awkward when Dakota has a hard time trying to compliment Sam.

Jo insults Cameron's physical ability after he hopes for an academic challenge.

Anne Maria asks B what he thinks the challenge will be, getting no response...

...leaving B confused in the confessional when she makes a remark.

Chris introduces the campers to their second challenge; a tell-all trivia game.

Brick becomes embarrassed when a secret of his is revealed.

The Maggots earn their first point.

B reveals that his real name is Beverly.

The Maggots end up arguing about if they have to leave the challenge.

Brick advices Cameron to stop embarassing himself as the challenge is already over.

The twelve remaining contestants prepare for the second part of their challenge.

Lightning gets hit by the giant boot...

... and gives the maggot to Brick.

Lightning advances with the rat.

Dawn is warned by the mutant rat of an incoming cannonball...

...which instead hits Brick.

Scott gets hit with the wrecking ball.

Scott finishes his part of the challenge.

B makes a female beaver...

...until they discover it's fake.

Sam during the challenge.

Dakota gets distracted and doesn't get the rat.

Mike and Zoey bond with one another when their hands touched.

Mike is vomited on by a maggot.

Mike transforms into Svetlana for the first time.

Dakota using a compact mirror to look at herself.

...which makes Zoey kick them.

Cameron gets bitten by his maggot.

...which makes her scream in terror after she spits out mud.

Cameron wins for the Mutant Maggots.

Lightning chases after Sam in anger after the latter says "winning isn't everything".

The bottom two ends up being B and Dakota.

B awaiting for the final results.

Dakota is eliminated and takes the Hurl of Shame.

Retrieved from "https://totaldrama.fandom.com/wiki/Truth_or_Laser_Shark?oldid=1625403"
Community content is available under CC-BY-SA unless otherwise noted.