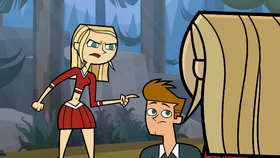 An order of Mary's Lamburgers

Amy
The two teams set off into a balloon war. Unfortunately for them, it isn't water inside the balloons, but instead various weird and painful items. One contestant attempts to get closer with a teammate, while the feud between two sisters becomes more intense. When one team's winning streak meets its end, one contestant is initially sent home; however, her long overdue payback to another gets the other sent home instead.

Jasmine and Samey are out foraging for food for their team. The former tries to assure the latter that just because Amy forces her to help every morning doesn't means she has to and that it should really be her choice whether or not she does it. Samey mistakes this for Jasmine saying she doesn't want the company. She also points out that Amy is both the pretty and the "favorite" twin. However, Jasmine defends Samey's self criticism and tells her she needs to stand up for herself. Their friendship solidifies as Jasmine confirms Samey's question as to whether they were friends because Jasmine doesn't appreciate the way Amy treats her. Jasmine also confesses that she herself has a hard time forming bonds because people are intimidated by her, and she herself is happy to have a friend in Samey. Shawn approaches and he and Jasmine immediately seem to display attraction to one another. Samey takes the hint and goes off to leave them in private. Jasmine jokingly asks him if he's seen any zombies around. In the confessional, Shawn gushes about her looks, survivalist skills, and her "healthy" concern about the undead. He adds that he is conflicted about wanting to date her because he doesn't want a zombie baby attacking him. Shawn leaves the girls to bring Waneyihtam Maskwak the food he's gathered. Samey wonders if they were talking about zombies, and Jasmine responds that it's a "running joke" between them, not realizing that Shawn sees otherwise.

At Waneyihtam Maskwak's cave, Sugar is overjoyed that Shawn's brought back food, tackling him to the ground and rummaging through the bag. Ella is happy too and tries to sing a song, but Sugar shoves a pear in her mouth to keep her quiet, and tells her to eat up. Sky arrives with a bucket of water. Ella attempts to continue singing, only to be cut off again by Dave. Shawn suggests she go sing to Kinosewak as a sign of "friendly competition". Ella loves this idea and leaves. Sky compliments Shawn, offering to go with him to forage the next morning. Dave seems uncomfortable and adds that he will come along. With Kinosewak, Rodney thanks Jasmine and Amy for obtaining their breakfast. Samey immediately rebels by yelling she is the one who went out and not Amy. Topher narrates the quarrel while Jasmine hesitates that this isn't the right time to tell Amy how she feels. Samey goes as far as calling her sister a "monster". The latter sobs into Scarlett's arms (later showing that those were crocodile tears). Rodney defends Amy as Max inputs that jealousy is a low form of evil. Chris announces that everyone should gather for the challenge. Jasmine goes off as she puts berries into the hand of Rodney, who then falls back in love with her.

Topher is the first to reach Chris. The former wants the challenge to be explained to him so he can then display his hosting abilities to the other contestants. Chris declines his request. Sugar says in the confessional that she only trusts Topher "about as far as she can throw a tractor". Chris elaborates that the challenge is a game of "Doom Balloons". Every competitor will collect as many balloons as they can carry. Each one holds a dangerous or disgusting surprise, which will be used against the opposing team. If a contestant is hit with a balloon, they are eliminated no matter how the contents got onto them. Max visits one of the several stashes of "pure evil" he hid around Pahkitew Island. Scarlett asks him what he's doing, and he replies that he's planning a contraption to launch his balloons from a safe distance. Scarlett suggests that he instead use sharp projectiles to pop Team Maskwak's balloons onto themselves. Max takes credit for the idea. He also thinks Scarlett is "hopelessly in love with him", but is too focused on his work, and even says "evil doesn't date."

Sky is navigating through the forest cautiously. When she hears a noise, she prepares one of her balloons. She backs down, relieved, as she notices it is just Dave, who warns her not to throw. The two share a conversation which leads to Dave admitting in the confessional that he's falling for her. Sky is obviously drawn to him as well. However, she doesn't want anything distracting her from winning. She hears another noise and pushes Dave off to the side. From the safety of a bush, Max shoots a sharp object at Sky's balloon, causing a swarm of bees to attack her. Max is ecstatic that his plan worked while Scarlett rolls her eyes. Rodney has a good aim on Sugar and is about to hit her until she unintentionally throws a snake into his face. Back with Dave and Sky, she orders him to go warn their team members that Team Kinosewak is using their own balloons against them. Topher abandons the challenge to inform Chris that his crow's feet are showing. Chris runs off to get a makeup touch up.

Shawn sees Jasmine wandering through the forest, somehow managing to stay quiet even with the rocks and twigs on the ground threatening to break her silence. He says in the confessional that he wants to like her, but doing so will result in him not being able to kill her should she turn into a zombie. Sugar charges to attack a member of Kinosewak with a balloon. It turns out to be just Ella holding one with a smiley face on it. Ella walks off with her exclaiming that she's looking forward to being friends with her. Sugar pretends to hear something in the woods in order to get the opportunity to push Ella into a bush. Shawn, who has camouflaged himself with mud and moss so he can blend in with a tree, meets up with Dave. Dave fulfills Sky's request by telling him about Kinosewak's tactic. When he goes off, Shawn hurls balloons at Scarlett and Max with a slingshot, eliminating them. Rodney is trying to figure out how to break up with Amy without hurting her feelings. He comes across Amy and Samey fighting over the incident at breakfast. Rodney politely asks Samey if he can have a moment alone with her sister, and she gladly complies. He repeatedly fumbles his words while trying to talk to her. Amy walks off yawning. Rodney begins to cry, which leads to Dave hitting him with a balloon.

Topher runs up to Chris to compliment him on the challenge. As the host starts to get irritated with his admirer, Dave uses up his last balloon on Topher. Ella and Sugar are walking together as the former begins to sing, making Sugar call to Chris, informing that Ella was once again singing. Jasmine swings by on a vine and hits them both. Sugar squeals on Ella to Chris, who doesn't care that Ella sang as long as it caused them pain. Dave's lack of balloons works against him as Amy and Samey attack him with theirs. Samey delivers the final blow, covering him with itching powder. Amy tries to take credit for it when Jasmine approaches. She, however, doesn't buy it because she knows how to tell the twins apart. Seeing Samey has one more balloon, Jasmine decides to take them with her to Shawn's hiding spot. She encourages Samey to drop it on him. Before she can, Amy grabs onto it because she wants to take the shot. The three girls fight for it until the balloon bursts, not only dousing them in the paint but also causing Kinosewak to lose the challenge, making Jasmine scream in anger.

Samey rants in the confessional that Amy always takes whatever she wants. She pauses suddenly, contemplating this statement and coming up with a plan. Later on, she is shown holding a green apple in her hand before Amy swipes it from her. The latter confidently tells her that she talked to all of Kinosewak about how Samey's balloon lost them the challenge. Amy walks off, munching on the stolen apple, to which Samey smiles and silently tells her to enjoy the poisonous fruit that she has learned about in the previous episode. At the elimination ceremony, the sisters are the bottom two. As Chris reveals that Samey has been voted off, Amy begins choking, her face swelling up. Samey takes on her sister's mannerisms and dismisses it as "Samey" begging for sympathy, while Amy struggles to speak. Chris, unable to identify which twin is which, forces Amy to take the Cannon of Shame. In the confessional, Samey claims that Amy has had her karma coming to her for years.

Jasmine begins to show an attraction towards Shawn.

Samey has had enough of Amy and that she needs to stand up for herself.

Samey walks away to leave the two in private.

...happy that he brought back some food for the team.

Ella sings her gratitude to Shawn and Sky...

...before Sugar stuffs a pear in Ella's mouth to keep her quiet.

Ella loves Shawn's idea to sing to the other team.

Amy fake cries, pretending to be the victim.

...and Ella shows up hoping to sing them a song.

Topher expects Chris to ask him to co-host.

Dave is scared by Shawn's camouflage.

Sky almost throws a balloon at Dave, before realizing who it is.

...moments before Scarlett sneaks up behind him...

Max claims Scarlett's idea as his own.

...but she interrupts him, believing an opponent to be nearby.

Max prepares to shoot to Sky and Dave.

...and pops her balloon, releasing some bees, causing her to run away.

Sugar with a snake attached to her face.

Scarlett and Max get hit.

...and sees the number of stingers on her.

Sky tells Dave to warn the others about Max and Scarlett's plan.

Ella with her "delighted" balloon and a butterfly.

...before realizing that it is only Ella.

Ella shows her balloon to Sugar.

Dave throws a balloon at Rodney.

Sugar and Ella in the aftermath of Jasmine's hit.

Chris gets a facial.

Topher is eliminated from the challenge.

Dave scratching himself in the confessional.

Amy tries to tell Jasmine she was the one who shot Dave...

...but Jasmine can tell the two apart.

Shawn hides behind a bush.

Amy tries to take the balloon from Samey, claiming that she’ll miss.

Amy tells Samey that she is doomed to elimination.

Team Maskwak is declared the winner of the challenge.

Amy takes the apple from Samey.

Samey pretends to be Amy and finally gets revenge on her.

Amy is eliminated in Samey's place.

"I guess twinning isn't everything!"
- Samey

Retrieved from "https://totaldrama.fandom.com/wiki/Twinning_Isn%27t_Everything?oldid=1628026"
Community content is available under CC-BY-SA unless otherwise noted.