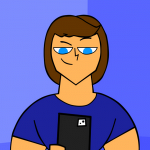 Ieuan is seen to be the 4th person to come of the yacht in Not So Happy Campers - Part 1. When Duncan arrives him and Duncan fist pound at become friends. When Katie and Sadie arrive Ieuan says "Look at her <3" and keeps stairing at Katie. When they have the group photo for the promos Ieuan stands right beside Katie. Later on Ieuan is put on the Killer Bass, and is sad Katie isn't on his team. When everyone is eating in the main lodge Ieuan is seen sitting beside Duncan laughing at Harold because he is ugly. When Chris tells the campers the next challenge Ieuan seems to be very excited.

In Not So Happy Campers - Part 2 Ieuan is the second person from his team to jump of the cliff. He lands in the safe zone. When Duncan reaches the beach where Ieuan is they both high-five and Ieuan says "Great job man, that was to easy." After when Ieuan and Duncan see Katie and Sadie jump of the cliff Ieuan starts to wonder. Ieuan asks Duncan "Did Katie or Sadie switch teams?" And Duncan says "I don't know." After Katie and Sadie reach the beach, Ieuan is happy to hear Katie has switched teams. Ieuan and Duncan are seen pushing a crate together, Duncan and Ieuan both laugh when they found out Katie and Sadie went to the bathroom in poison ivy, leaving Katie and Sadie to glare at them! After Ieuan sees Ezekiel picking his nose he goes in the confessional and says "That his NASTY!" After Ieuan finds out their team loses he is mad Courtney for not completing the challenge. When Ezekiel makes his sexiest comments in the main lodge Ieuan starts laughing, leaving all the girls to glare at him! At elimination Ieuan gets the fourth marshmallow. Ieuan didn't really care Ezekiel was eliminated, and smirked when he left the island

In The Big Sleep Ieuan is very mad to be woken up at 7:00 in the morning. He and Duncan arrive at the main lodge after the run together and sit down and wait for the rest of his team. Ieuan and Duncan scoff down as much food as they can at breakfast, not knowing this was all part of a challenge. When they found out their doing an awake-a-thon Ieuan glares at Chris. After everyone finds out Justin was cheating at the challenge Ieuan goes and falls a sleep beside the fire. When Ieuan finds out his team loses he is angry. Before the bonfire ceremony Ieuan finds Katie in the main lodge. Katie asks Ieuan"What do you want?" Ieuan asks Katie if she would want to go out with him. Katie laughs and walks away. Ieuan in confessioanl "She wants me ;)." At the bonfrie Ieuan gets the first marshmallow, and is happy "anger issue" Eva is gone. He then is in the confessional and says "She had anger issues, but she was a strong palyer :/."

In the morning of Dodgebrawl, Ieuan is seen to be very angry with Harold, because of his snoring! When Duncan walks by, Ieuan tries to fist pound him, but Duncan just falls asleep. When Gwen walks in Ieuan and Duncan are the only ones not to clap. Ieuan luaghs when Courtney hits Gwen with food. When Ieuan finds out the challenge Ieuan is excited, "I got this in the bag," Ieuan says happily. When everyone enters the dodgeball arena Ieuan is even more excited. Ieuan laughs when Lindsay forgets what to do in the challenge, and gets hit with a dodgeball. Ieuan particpates in the first round and is the second to get hit. Ieuan comes back in the second round and is the second to last standing! Ieuan is was very scared for Katie when she is getting chased by the dodgeball. When Katie gets hit Ieuan gets very angry at Cody. Ieuan is with his team when they wake up Duncan. He wasn't very scared when Duncan broke the stick. When it's all tied up Ieuan is totally against Harold competing in this round. Ieuan didn't compete in this round! When Harold wins the challenge for his team Ieuan had second thoughts on Harold. Ieuan is seen holding up Harold and cheering with the rest of his team. Ieuan is seen watching the elimination from up on the mountain. He wasn't surprised about Noah's elimination, as he wasn't a team player.

In the morning of Not Quite Famous Ieuan is seen sitting at the stage area with Duncan waiting for Chris. When Chris announces the challenge Ieuan is not impressed. Ieuan goes in the confessional and says angrily "Talent show?!?!?! Worst challenge ever!" Ieuan walks of with Duncan unitl he returns to watch the players compete to win. Ieuan was very impressed with Trent's song to Gwen. When Bridgette started puking on the crowd she puked all over Ieuan! When Heather starts to ready Gwen's diary he thought it was hilarious! He did feel bad but couldn't stop laughing with Duncan. When Chris announces the Killer Bass had won the challenge he was very impressed with his team. Ieuan is seen in the boat of losers when Justin is eliminated. Before the boat starts sailing away Rob jumps out and swims to his cabin.

The day of The Sucky Outdoors Ieuan is seen sitting with Duncan but is admiring Katie. When Chris announces the challenge Ieuan is very excited as he is very good in the outdoors. When the Killer Bass are walking to their campsite Ieuan stops with Katie and Sadie for some berries. He then goes in the confessional and vents about being alone with Katie. When he figures out they are lost he doesn't freak out because this is all his plan. Later when Katie and Sadie get into a fight, Ieuan is seen in the cave beside Katie while Sadie is alone. He then asks out Katie again. She says "Yes" and Ieuan is very excited. He then is seen running away from the bear with Katie and Sadie the next morning. When they finally return to camp after running for awhile Ieuan is very releaved. He then is very happy that Katie and Sadie made up, but is mad they lost the challenge! At elimination Ieuan is "SHOCKED" Katie was eliminated. He tells her he will win it for her. He is seen with Sadie at the dock saying goodbye before she leaves! He is seen in the confessional angrily saying "I'm going to get revenge on everyone on my team for eliminating Katie"

Retrieved from "https://totaldrama.fandom.com/wiki/User:TotalDrama1100?oldid=1345771"
Community content is available under CC-BY-SA unless otherwise noted.