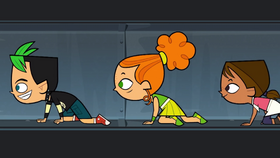 One of the kids has just won a new toy from a crane machine that was confiscated by the teacher. The naughty kid decides to lead the team to get the toy back by sneaking into the teacher's lounge via air vents while another stays behind to distract the teacher. Following the success of their mission, the leader abandons his team as it was simply a plot for him to escape the daycare.

The episode opens with Owen rushing into the classroom trying to find his friends, who are playing inside the castle. He announces that he recently won a prize from a crane game. When Duncan asks what he won, the class goth, Gwen, suddenly appears from the shadows and brings up how there were forty-three crane related deaths last year alone. Duncan retorts that the statistics might be referring to actual cranes, but Gwen simply says the article she read only said cranes before disappearing back into the shadows. Owen continues his story, telling his friends that he had won a Uber Ball, having spent seventy-three dollars in quarters on the game. Noah warns Owen that Chef will confiscate any toys from home and he should hide it, but Duncan insists that he should play with it. After some thinking, Owen agrees to bounce the Uber Ball once. Despite dropping the ball slowly, it suddenly picks up momentum and begins to ricochet around the classroom, breaking objects along the way, until Chef enters the room and grabs it. Chef immediately asks whose toy it was, to which the other children all point at Owen.

Owen, Noah, Izzy, and Duncan are brought to Chef's office where he places the Uber Ball inside a locker with an electronic number pad and retina scan. Chef has become fed up with the kids for constantly breaking the rules, and intimidates Noah for making a sarcastic comment about him being a poor teacher. Upon seeing the number of toys inside the locker, the kids all become excited. After returning to class, Owen starts crying as he misses his new toy. Duncan, seeing an open ventilation shaft, comes up with a plan to escape the daycare. Requiring a few things from Chef's locker, Duncan rallies the other kids to help Owen break into the locker and get his ball back.

Duncan discusses his plan with the other kids: he would lead a team consisting of himself, Izzy, Owen, Courtney, Jude, and Harold to sneak into Chef's office via the ventilation shaft. Izzy, whom had memorized the combination earlier, would unlock the locker's code. However, Jude asks how they would bypass the retinal scan, to which Duncan reveals he had stolen Chef's glass eye while he was asleep and replaced it with a marble. Duncan then chooses to have Noah to stay behind in class so Chef will not suspect anything. Courtney volunteers to stay behind, but Duncan suspects she would snitch on them, so he forces her to come along. In the confessional, Courtney reveals Duncan is right and that she would absolutely expose her friends. Gwen refuses to take part in the plan and tells the others that Duncan's plan would get them all killed before scarily fading away into the background again.

Using a map Duncan drew, the kids navigate through the vents and reach Chef's office. Izzy and Duncan unlock the locker, where the kids are overjoyed to have all their confiscated toys back. However Duncan abandons them, revealing his actual plan was to escape the daycare. Izzy points out that Duncan has the map and without it, they are unable to return to class. Meanwhile, Chef has woken up and finds the class empty with the exception of Noah. When asked where everyone is, Noah claims they were playing Hide and Seek and he is having trouble finding them. Chef accidentally hurts Noah's feelings by pointing out how terrible he was at the game, but then tries to comfort Noah by listing off the good and bad things about the boy, only to further upset Noah as he is unable to think of a single good quality to balance his many bad qualities.

Without the map, the kids get lost in the vents and Courtney fears that they would all die in there, just as Gwen had warned them. Harold attempts to lead them, but ends up getting them deeper into the maze. Suddenly, Owen smells the scent of freshly baked pizza and leads his friends to the source. Meanwhile, Duncan has reached the roof of the daycare and scales down the building using duct tape and an umbrella he stole from Chef's locker. Just as he is about to reach the ground, he gets tied up by the tape and is spotted by Chef through the window. After catching Duncan, Chef orders Noah to end the game and bring the other kids out. Upon calling for them, the vents above them breaks and all the kids fall out from it. As Owen tries to find his Uber Ball, the toy falls out the vents, bounces off into space before returning to the daycare and ricochets around the classroom until the entire building gets destroyed.

Leshawna is drawing at a table. When Owen comes by, she shows him a flipping page of Chef farting, which causes them both to laugh.

Owen is unable to find his classmates.

The kids are curious to hear what the news is.

Owen tells everybody about the prize that he won.

The children are extremely excited to hear about the new toy.

Courtney makes the first confessional in the daycare.

Owen, Duncan, and Harold are frightened by Gwen's information.

...alongside its long history...

Noah tells his friend about the toys from home rule.

Duncan explains his love for anarchy.

Owen is undecided whether to throw the ball or not...

...so he tries to think about which option is better.

Owen says that he will only throw his new ball once...

...leading to an unexpectedly chaotic turnout.

The ball rapidly destroys everything it touches.

Chef finds the ball after the noise it created.

Everybody points at the culprit.

Chef confiscates the ball from the kids.

The kids discover everything inside the safe.

Duncan and Owen are overly excited to see all of the toys inside.

Duncan comes up with a plan to escape the daycare, using Owen's Uber Ball as an excuse...

...and convinces the others to help him.

Everyone is excited about the plan.

Duncan explains his plan to the others.

Courtney tells Jude the difference between retinal and rectal.

Noah is chosen to stay behind.

Gwen refuses to take part in the plan as everyone will die in there.

...putting him and Izzy's good spirit of observation to good use.

Duncan reveals his true plan and abandons his friends.

Izzy with her mouth full of gumballs.

The kids try to get Duncan back as he has the map.

Chef tries to make a list of Noah's attributes and flaws.

Without the map, the kids are unable to navigate through the vents.

Harold attempts to lead his friends.

Izzy thinks about Gwen's excitement when she finds out what had happened.

Owen's olfactory instinct gets everyone out of trouble.

...before Chef starts scolding him.

Everyone falls from the ceiling...

The Uber Ball destroys everything it touches, once again.

All of the daycare residents are scared to see the disaster that is happening...

...leading to the daycare getting destroyed.

A drawing of Chef farting that Leshawna drew in the ending credits.

Retrieved from "https://totaldrama.fandom.com/wiki/Venthalla?oldid=1643930"
Community content is available under CC-BY-SA unless otherwise noted.