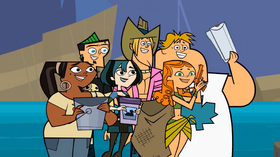 Capture and bring to camp a specific animal, chosen randomly, without harming it

Izzy
The campers square off in a challenge where they must trap a certain animal. One person gets a delicious meal as a reward for catching their animal first, while two people form a temporary alliance. Two people get shot with a tranquilizer dart by an unstable contestant while another ends up having very bad luck. This all leads up to someone getting voted off once again.

The episode opens with the seven remaining campers walking through the camp. Owen apologetically approaches Izzy with a handful of flowers with romantic intent. She bitterly ignores him because she is still mad at him for potentially putting her life in danger when he pushed her into the path of a "psycho killer" in the previous episode just to save himself. Owen tells her that he would never abandon her, but then suddenly disappears. When the other campers gather to ask where Owen is, they find him caught in a snare trap, hanging upside-down in the tree above them. Another trap is triggered and a wooden cage falls on top of the rest of the campers. Chris arrives on the scene with a beaver on his head and a hunting knife to tell them to meet in the main lodge for breakfast and the next challenge. He then throws the knife to cut Owen from the tree, who lands on top of the cage, causing it to open and release all of the campers.

In the main lodge, the campers are served paste, while Chris details the next challenge: trapping a wild animal and bringing it back to camp unharmed. After a brief lesson on rangers and game wardens, they are told the prize for winning: a meal of all their favorite foods. The campers meet at the boat house for their animal assignments by drawing lots. Owen gets a chipmunk, Leshawna draws a frog, Duncan picks a raccoon, Gwen ends up with a duck, Geoff gets a beaver, Izzy receives a deer and Heather ends up with a bear, much to her disappointment. Izzy seems to be excited to be "baggin' a doe". Declaring the challenge to be impossible, Heather almost quits, until Chris tells her the punishment for failing the challenge: cleaning the communal washrooms, which are a mess thanks to Owen overdoing it on breakfast. Heather reluctantly agrees to participate in the challenge. The campers are given 60 seconds in the boat house to collect anything useful for trapping their respective animals. Inside, the campers rummage around; Heather and Gwen argue over a net until Gwen spots some duck bait. Duncan is indecisive about what to take, but settles on a chainsaw; and Izzy grabs several crates and runs out just before time is out, finding a tranquilizer gun in the process. Heather still feels she has no chance of catching a bear, and desperately goes through Izzy's crates. Knowing Heather is serious competition, Duncan approaches her and offers to help her out in exchange for forming an alliance to get to the final two. Heather rejects the offer, but Duncan figures she'll be back.

Out in the woods, Gwen lays down piles of duck bait to lure the duck to her, but as it gets close, it sees her, sticks out its tongue and runs away in a similar to the roadrunner. Leshawna locates a frog and tries to trap it with a bucket. The frog leaps away several times, but when Leshawna gets near, she falls into a deep puddle and declares war on the frog. At the bear cave, Heather tries to lure the bear out with a pail of garbage, but a roar from inside scares her away. Duncan finds a lone raccoon and tries to sweet talk it into following him, but a large band of raccoons comes up from behind. Duncan is about to confront the lot with the chainsaw, but they stack themselves on top of each other, forming a large furry monster that resembles a transformer robot. Izzy is hunting deer near the camp and fires three tranquilizer darts at the nearest thing that moves, Chef. Gwen is seen chasing the duck, while Heather runs past both of them. The raccoon monster chases Duncan, firing off raccoons from it's "arm cannon" until one knocks him off a cliff. Duncan recovers, only to find the furry beast sitting on his head.

Owen climbs a tree to catch a chipmunk, and he drones on about being a naturalist and being a friend to all living creatures, trying to reason with the chipmunk to come quietly. After declaring he loves it, the rodent bites Owen on the nose, and the tree branch he is on collapses. Elsewhere in the woods, a unicorn stops at a pond for a drink of water, then collapses a when Izzy nails it with a tranquilizer. Heather is back at camp complaining about catching a bear when Gwen runs in, luring the duck with bait; she calls out to Heather to open the cage, and Gwen tosses the bait inside, catching her animal, and winning the challenge. Gwen goes on about what she wants to eat, naming various "duck" related foods, when Duncan arrives, ripping the raccoon off his head, and tossing it in the cage. Duncan repeats his offer to Heather, showing her a pair of deer antlers from Paintball Deer Hunter, in need of help and a new alliance, Heather accepts.

At a beaver dam, Geoff swims underneath to find a family of beavers sitting at a dinner table in their modestly decorated home, who then slap him with their tails. Geoff tries to be friendly with them, telling them not to get him angry, but they ignore this and continue to beat him. High in the sky, the yellow airplane from previous episodes is flying overhead. However one of Izzy's tranquilizer darts hits it in the wing, causing it to plummet to the ground. Leshawna tries again to catch the frog, this time using a piece of cheese on a stick, the frog shows little interest, and Leshawna approaches closer but falls in another deep puddle. Owen is still chasing the chipmunk, this time on the ground, but he isn't paying attention and runs into a low hanging tree branch. Duncan is explaining his plan to catch a bear, involving Heather wearing the deer outfit and luring the bear back to camp; in the confessional, Duncan reveals that his plan is a win-win for him, as he either gets an alliance with Heather, or she gets eaten by the bear.

Back at camp, Geoff brings the entire beaver dam to the cage and dumps the family of beavers into it. A very muddy Leshawna arrives next with the frog in the bucket and dumps it in too. With a camouflage hat and wooden antlers, Izzy is searching for a deer and after believing that she has found one, shoots it with a tranquilizer dart. Thinking she has succeeded, she heads towards the fallen animal when the bear runs past, followed by Duncan. Duncan sees Izzy and asks if she's seen Heather, who then stumbles out of the brush and collapses with the tranquilizer dart stuck firmly in her butt. Owen has chased the chipmunk all the way to the camp and is trying to corral it into the cage, running all over the place and even crashing into the table where Gwen is trying to eat her specially prepared victory dinner; eventually the chipmunk goes in the cage, and Owen tells Chris to close the door, but he closes it after Owen runs into the cage behind the chipmunk. Owen is now in the cage with the other caught animals and tries to be nice to them, but they attack him instead.

At the campfire ceremony, everyone sits down to receive their marshmallows, except for a paralyzed Heather who is strapped to a board, with the so-called "butt dart" still in place. Chris tosses out the marshmallows to Geoff, Owen, Leshawna, Duncan, and bounces one off Heather's head; leaving Gwen and Izzy as the final two. While Chris is drumming up the suspense, a semi-conscious Heather tells him to just give it to Gwen already, so he does. Izzy accepts the defeat graciously, then throws a smoke bomb on the ground, and disappears. With Heather being the only contestant left who did not capture their animal, she is the one who has to clean the washroom. Due to her injury, she asks Duncan for help.

At the washroom, Duncan is inside cleaning while Heather is outside bossing him around and filing her nails, despite the fact that she is supposed to be paralyzed. When Duncan sticks his head out the door, he sees that Heather is fine, but she then goes back to acting paralyzed. When he asks about her paralysis, she tells him that it's coming back, like the memories of how he got her shot, which she will never let him forget. Duncan backs down and returns to scrubbing the showers, which Heather tells him to do with Gwen's toothbrush.

Chris in the recap, holding a beaver.

Gwen asks Izzy where is Owen...

...but she ends up answering herself.

Owen unlocks the cage by falling on it.

Chris tells the contestants that the competition is near to end.

The bear is relocated to a playground.

Duncan tries to pass Owen as his animal.

Owen is scared of Heather.

The communal washroom toilet, after Owen uses it.

The campers' reactions to the penalty.

... before choosing a chainsaw instead.

Heather and Gwen fight over a net.

Heather falls into a bucket.

Owen and Geoff high-five each other.

Izzy is happy by getting a tranquilizer gun...

Duncan attempts to ally himself with Heather.

Leshawna has a hard time trying to catch the frog.

Heather is trying to catch the bear...

...but she gets too scared so she runs away.

The duck does a parody of the "Roadrunner" from the Looney Tunes series.

Duncan and the raccoon tumble down a cliff.

Duncan finds a raccoon on top of his head.

Duncan tries to get the raccoon off of him.

Geoff gets slapped by a beaver's tail.

Owen runs into a tree.

Izzy continues to hunt a deer...

... and ended up shooting the wrong prey.

Duncan laughing at Heather in the confessional.

The animals get mad at Owen and proceed to attack him.

Gwen and Izzy end up in the bottom two.

Izzy prepares to leave the island again, this time with a disappearing act.

Chris teases Heather about having to clean the bathrooms as a penalty.

Retrieved from "https://totaldrama.fandom.com/wiki/Wawanakwa_Gone_Wild!?oldid=1631631"
Community content is available under CC-BY-SA unless otherwise noted.