Who Can You Trust?

Who Can You Trust? 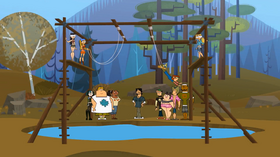 Sadie
The two teams are put to the ultimate tests in trust, pitting together mortal enemies and potential relationships. One camper relies on a close friend to take care of his pet, but the friend fails to complete his duties. However, thanks to an unexpected favor from an unexpected camper, the pet is fine — as far as they know. The losing team eliminates its weakest link after a convincing argument, though the eliminated contestant finds the "sweet" in bittersweet.

The episode begins with the campers having breakfast in the main lodge, with Chef serving them leftovers from the last challenge. Heather is still showing the effects of being locked in the freezer during the previous challenge, and she blames Gwen for what happened to her. Duncan steals one of the mugs in the main lodge, prompting Courtney to lecture him, leading Duncan to believe she likes him, which Courtney denies. Later, the teams assemble at the dock, and Chris tells the campers that this week's challenge is centered around building trust.

Chris claims that three challenges will be held, with duos from each team chosen by him to participate. The first challenge consists of a freehand climb up a cliff face, with DJ and Duncan participating for the Bass, while Heather and Gwen for the Gophers.

Chris supplies them with climbing equipment and explains that one person climbs while the other manages the rope slack. The climbers would have to deal with rusted nails, oil slicks, mild bombs, and whatever surprises they come across. Gwen and DJ wear their climbing gear, with Gwen troubled by the presence of a second rope attached to her, which Heather tells her is a backup line. While doing the challenge, DJ takes his bunny out of his pocket and hands it to Geoff. Gwen openly expresses her disdain for Heather.

During the climb, Gwen falls back after an explosion, but quickly gets back up and presses on. Moments later, Chris sprays Heather with hot sauce, and she lets go of the rope to rub it out of her eyes, causing Gwen to fall to the ground. Duncan is also sprayed by Chris, but this is unsuccessful since Duncan is wearing sunglasses — to cover his eyes — and is opening his mouth to swallow the hot sauce. As Gwen rejoins the climb, Heather pulls the second rope attached to Gwen and the skirt covering her behind is ripped away, just as she passes ahead of DJ. When DJ removes the ripped skirt from his face, he notices Gwen's panties and becomes ashamed. Despite this, Gwen continues on, but DJ slips off and manages to pull Duncan up by acting as a counter-weight; as a result, DJ and Duncan are suspended in mid-air. Gwen hits the top and wins the challenge for the Gophers a few moments later, before remembering she's already overexposed on TV and covering herself with her ripped skirt.

The next challenge, which Chris describes as an Extreme Cooking Challenge, takes place in the dining hall. Bridgette and Lindsay are assigned to their respective teams as cooks.

Geoff and Trent will eat a meal made from fugu blowfish, a poisonous Japanese blowfish, prepared by the cooks. Trent is concerned when he learns this and asks Lindsay if she has taken Biology. She later clarifies that she was asked if she had taken Biology rather than if she had passed it. Geoff takes a bite after the meals are finished, and he is fine. Trent bites into Lindsay's dish, punches himself in the face, screams, laughs, then turns pale, collapses to the floor, and vomits. According to Chris, Trent will be fine in twenty-four hours, and Chef administers C.P.R. as a precaution.

Geoff and Bridgette plan to go for a swim in the lake a short time later. Before diving into the water, Geoff takes a moment to secure Bunny in a "safe" location. Meanwhile, Chef administers a needle to Trent for his food poisoning at the first aid tent. Back at the dock, Geoff and Bridgette are drying off after their swim when they see Bunny being swallowed by a huge snake, which is then caught by an eagle, which is then swallowed by a freshwater shark.

Later, Chris tells the teams that the last challenge will have three blind challenges: the blind William Tell, the blind trapeze, and the blind toboggan race. For the blind William Tell portion, Chris explains that one team member will be blindfolded and will be shooting crab apples at an arrow perched on the head of another team member, with the first team member to knock the arrow off winning. Sadie offers to help, claiming to be a skilled shooter. As Courtney and Owen wear arrows on their heads and Sadie and Leshawna fire apples at them, Geoff goes off to presumably find DJ's bunny. Both shooters fail at first, but Leshawna eventually prevails by knocking Owen's arrow off his head. Sadie, on the other hand, is persistent and continues to shoot wildly even though everyone else tells her the challenge is over. Before realizing this, Sadie hits Courtney, the bear, the seagull, and the Sasquatchanakwa. Courtney swears to make Sadie pay for her irresponsibility before collapsing unconscious on the ground.

Chris explains that the trapeze is set up over a pond full of electric jellyfish for the trapeze portion. One team member must jump into the arms of another team member who is spinning on the trapeze while blindfolded. They could land in the pond if they miss. DJ asks Geoff where his bunny is before the challenge begins, and Geoff informs him that the bunny has run away, which depresses DJ. Duncan is then seen going off somewhere. For the Killer Bass, Bridgette is hesitant to jump while Harold is on the trapeze, but he persuades her to do so, and she makes it to the other side. Heather then prepares to leap to Lindsay, who is on the trapeze, blindfolded, but Lindsay misjudges the point at which Heather can jump, and Heather ends up in the pond. Chris declares the Killer Bass the winners of this segment.

At the infirmary, Heather steps in with a jellyfish still attached to her head, grumbling about the previous challenge, when Courtney wakes up and wonders where she is, to which Heather responds, "You're in the infirmary." Heather then asks Chef if he has anything for extracting jellyfish when it is stinging her, to which Chef nods and Heather gives him a thumbs up. Courtney then sees Duncan luring a bunny with a carrot, revealing where he went after hearing about Bunny.

Chris explains that each team will have a blindfolded driver and navigator who will yell instructions during the blind toboggan race. DJ and Geoff will compete for the Bass, though DJ is still depressed; Gwen and Leshawna for the Gophers. The teams begin their descent down a steep hill. Gwen gives Leshawna excellent guidance, but Geoff does not do the same for DJ. Leshawna and Gwen, on the other hand, hit water about halfway down. At one point, Geoff points out that Duncan has found Bunny (the one he was luring before), so DJ removes his blindfold momentarily to see Bunny. Back to normal, DJ steers his team past explosions to victory in the race, but Chris points out that DJ removed his blindfold, which is against the main rule, and the Gophers win the overall challenge as a result. Afterwards, Courtney asks Duncan about his good deed later. He initially denies it, but later confesses to her. She promises not to tell anyone afterwards.

At the elimination ceremony, the Killer Bass await for the marshmallows, which are given to Duncan, Bridgette, Courtney, DJ, and Geoff.

Harold receives the last marshmallow, leaving Sadie as the camper voted off, just as Courtney predicted. Sadie accuses the other campers of being a bunch of "marshmallow-eating freaks" and tears her way to the Boat of Losers. She's upset because she wanted to win not just for herself, but also because Katie told her she should. Sadie's sadness disappears as she walks and sees her best friend waiting for her on the Boat of Losers. Sadie jumps on the boat, embraces Katie, and squeals as the Boat of Losers taking them both away.

Heather sick after being locked in a freezer in the last episode.

Courtney confronts Duncan after he steals a mug.

Courtney tries to reason with Duncan, saying he might get kicked off the show for stealing.

...while the Bass nervously look on. 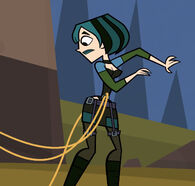 Gwen discovers another line attached to her.

DJ's bunny was with him before he started the first challenge with Duncan.

DJ and Gwen start to climb.

Chris tries to sabotage the game with a hot sauce water gun.

However, it doesn't work on Duncan when he eats it.

Duncan and DJ lose the challenge.

Gwen quickly covers herself after cheering for her win.

and teaches them which regions are poisonous.

Lindsay excited to cook for Trent...

...breaking the window as it flies away.

Bridgette's sushi preparation of the blowfish.

Lindsay is not confident with her dish.

Lindsay tries to use ketchup on her preparation of the blowfish.

Trent seems to jokingly punch himself after eating the dish...

...but the poisonous organs of the blowfish begin to have an affect on him.

Turns out Lindsay did not finish biology class.

The dish completely fails the test.

"Is anyone going to help this guy?"
- Geoff

Geoff leaves Bunny on the dock as he and Bridgette go swimming.

"Last one in is a rotten blowfish!"
- Geoff

Bridgette and Geoff grow closer as a result of their trust.

Bridgette dries off after the swim.

...and finally, the shark eats all three.

DJ is used to demonstrate the next challenge.

Sadie isn't as good a shot as she lets on.

Chris tells Sadie that the Gophers have already won the challenge.

DJ tears up after Geoff tells him that bunny ran away.

DJ is miserable once he realizes Bunny has left him.

Lindsay fails to catch Heather in the next challenge, telling her to jump at the wrong time.

"Sometimes the universe just gives you a freebie."

Heather gets a large jellyfish stuck to her head...

...and waits for Chef to cure her.

Chef oils the bottoms of the sleds.

Gwen and Leshawna do terrible in the last challenge.

Chris setting off some leftover explosives from the first challenge.

Courtney reveals to Duncan that she knows he is a good person, which Duncan protests to.

The Screaming Gophers still win the challenge due to the fact DJ lifted his blindfold.

Courtney bites into her marshmallow after Sadie looks at her.

...and Harold are on the chopping block.

Sadie leaves the show as an unhappy camper.

Courtney is satisfied with Sadie's elimination...

...and harshly waves goodbye to her as a final insult.

Katie calls out to Sadie.

Sadie is happy to see Katie on the Boat of Losers.

The best friends hug each other while leaving the island.